There is a classic 1979 Soviet comedy called Moscow Does Not Believe in Tears, and that phrase fit the bill here. This wasn’t the dream ending the Russians had hoped for – let an atonement for bowing out in the 2014 Olympic quarter-final in Sochi – but at least they had some reasons to smile in their last IIHF Ice Hockey World Championship game in the Russian capital.”Even though we didn’t make the final, we wanted to give our fans something to cheer, to thank them for coming and supporting us throughout the tournament,” said Russia’s Roman Lyubimov.

Under head coach Oleg Znarok, the Russians have now won medals at three consecutive Worlds: gold (2014), silver (2015), and bronze (2016). They’ve medalled at eight out of the last 10 Worlds altogether.

Still, more was expected in 2016. The hosts stumbled in their opening 3-0 loss to the Czechs and a 6-4 win over now-demoted Kazakhstan, but then powered through without a defeat until falling 3-1 to their recent nemesis, Finland, in the semi-finals.”I’ve got mixed feelings about this tournament,” said Russian starting goalie Sergei Bobrovski. “We were under a lot of pressure, and there was great expectation around us. It feels like we lost, even though we came out with a medal. At the same time, the guys put up a good fight. We gave everything we could but it wasn’t quite enough.”

Sergei Moyzakin led the way with two goals and an assist, and Artemi Panarin had a goal and two assists. Yevgeni Dadonov and Vadim Shipachyov each added a goal and an assist. Vyacheslav Voinov and Ivan Telegin also scored for Russia. Captain Pavel Datsyuk chipped in three helpers.”We played pretty average,” said Shipachyov of his team’s overall performance. “It’s good that in the end we got a medal, but overall we’re disappointed.”

Frank Vatrano scored twice for the Americans, who outshot Russia 30-29.”We knew what to expect: high-end skill and offensive chances,” said Tyler Motte. “They brought it today.”

It was tough for both sides to bounce back the day after their golden dreams ended. In the semi-finals, the U.S. rallied from a 2-0 deficit against Canada, only to lose 4-3.”We had the late game last night,” said Dylan Larkin. “It’s a quick turnaround. And then the emotions of losing a close one to Canada last night. And then [Russia] came out and played a good game in front of the home crowd. It hurts. It’s very disappointing.”

The Americans missed a chance to become the first nation ever to win back-to-back bronze medals by beating host countries. In last year’s bronze game, the U.S. earned a 3-0 shutout over a Czech team with tournament MVP Jaromir Jagr in Prague. The last time the U.S. medalled at consecutive Worlds was in 1949 (bronze) and 1950 (silver).”We had a game plan,” said U.S. captain Matt Hendricks. “We knew what we had to do. We just didn’t execute. You have to give Russia a lot of credit. They played a very strong game.”

Still, overall, the U.S. can take pride in salvaging a fourth-place finish. Coach John Hynes’ team exceeded expectations by making it this far after losses to Canada, Finland, Germany and Slovakia in group play. In the near future, the Americans could well find themselves in the final, thanks to USA Hockey’s excellent development programs.

At 6:23, Voinov opened the scoring on a centre point drive through a kneeling Keith Kinkaid’s legs, with Sergei Shirokov providing traffic in front. That ignited Russia’s confidence. The mood lightened perceptibly in the Ice Palace with chants of “Shaibu!” from the partisan crowd of 12,043.

The Russian power play struck to make it 2-0 at 13:41. Datsyuk sent a nice cross-ice pass to Mozyakin, who teed up a slapper from the left faceoff circle that beat Kinkaid high to the stick side.

Mozyakin, 35, won the KHL scoring title this season (67 points) and captained Metallurg Magnitogorsk to the Gagarin Cup as the leading playoff scorer (25 points). He is the second all-time leading goal-scorer in Russian league history behind Boris Mikhailov.

The U.S. had a rough end to the first period, as Russia’s defencemen began throwing their weight around. Dmitri Orlov caught Jordan Schroeder with a low hit, sending him cartwheeling and shaking him up. Then Maxim Chudinov rammed into J.T. Compher in front of the U.S. bench, appearing to leave his feet in the process. However, the check only garnered an interference minor.

Russia’s antics continued at the start of the second period, as Telegin cut to the net off left wing and ran over Kinkaid. Not long afterwards, the U.S. had a good shorthanded chance, but Bobrovski stood firm to deny Brady Skjei on a rebound off the rush.

Russia went up 3-0 at the halfway mark. Mozyakin found Datsyuk in the right faceoff circle with a hard pass, which the captain settled down before setting Telegin up for an easy goal into the wide-open net.

The top-scoring Russian line combined for a beauty to put the game out of reach at 12:49. Vadim Shipachyov sent a clever cross-ice pass to Panarin, setting up a 2-on-1, and the Calder Trophy candidate with the Chicago Blackhawks pulled up before dishing it to Dadonov to bang into the open side.

The U.S. broke Bobrovski’s shutout bid at 14:29 on Vatrano’s power play goal with Patrick Maroon screening in front. However, the Russians answered less than a minute later. Panarin went to the net and converted the rebound from Chudinov’s high shot off the post to make it 5-1.

Mike Condon replaced Kinkaid in the U.S. net to start the third period, but it was too late to make any difference. Vatrano fired a one-timer past Bobrovski at 3:42 for his third goal of the tournament. But a full-fledged U.S. comeback was about as likely as cherry blossoms in December in Yakutsk, Russia’s coldest city.

Mozyakin potted his second goal of the game with 6:47 left, finishing off a lovely centering pass from Datsyuk. And with seven seconds left, Shipachyov rounded out the scoring with a power play goal sweetly set up by Dadonov.”It would have been a good performance for me if we had won the cup,” said Shipachyov, who finished with a tournament-leading 18 points. “But we didn’t, so I can only say I’ve had an OK tournament.”

On only one occasion have the Russians failed to medal as the home team. They disastrously finished 11th at the 2000 IIHF World Championship, the first time St. Petersburg hosted the tournament.

Connor McDavid’s first goal of the world hockey championship proved to be golden.

McDavid’s goal in the first period stood as the winner as Canada successfully defended its world championship title with a 2-0 win over Finland in the tournament final.

The 19-year-old Edmonton Oilers centre had registered eight assists in the first nine games of the tournament, but was one of just two Canadian forwards not to have recorded a goal coming into the gold-medal game.

McDavid ended his drought at the 11:24 mark of the first period, driving to the net and deking out sprawling Finnish netminder Mikko Koskinen.

Matt Duchene added an empty-net goal with one second left on the clock to seal the win.

Max Talbot made 16 saves for his tournament-leading fourth shutout.

Canada came ready to play on Sunday, registering the first seven shots of the game before the Finns fought back with several good chances late in the first period.

Talbot, determined to bounce back from a sub-par personal performance in a 4-0 loss to Finland in the preliminary round, made big saves on Patrik Laine, Jussi Jokinen and Jarmo Koskiranta to help send the Canadians into their dressing room with a one-goal lead at the end of 20 minutes.

In a hard-hitting second period, Canada outshot the Finns by a margin of 13-4. The best Finnish chances came with Mark Scheifele serving a slashing penalty late in the period, when Talbot stopped Koskiranta on the doorstep, then denied Laine as he shot the puck while streaking down the right wing.

In the third, Canada took a page from the playbook of the Finns, who had allowed just eight goals in nine games heading into the final. Canada shut down the opposition with strong defensive play, limiting quality Finnish scoring chances.

Koskinen made 31 saves for the Finns.

Finland came into the final undefeated with a 9-0 record and had a chance to become the first nation ever to win the world under-18 championship, world junior championship and world championship in the same year, but fell one game short.

Canada is the first repeat gold medallist at the world championship since Russia won back-to-back titles in 2008 and 2009. Canada’s last back-to-back wins came in 2003 and 2004.

With his new gold medal around his neck, Canadian captain Corey Perry became the 27th player to join the esteemed Triple Gold Club, adding a world championship gold medal to his two Olympic golds from 2010 and 2014 and his 2007 Stanley Cup. Perry also won gold at the 2005 world junior championship.

In the bronze-medal game earlier on Sunday, Russia got three points each from Sergei Mozyakin, Artemi Panarin and Pavel Datsyuk in a 7-2 rout of the United States.

Panarin said Russia had played with more freedom after a weight of expectation was lifted following its semifinal defeat to Finland on Saturday.

“I think we just relaxed today,” said Panarin, a Calder Trophy finalist. “Until now … the pressure was serious.”

The U.S. led 30-29 in shots, but Russian goaltender Sergei Bobrovsky produced some impressive saves to protect the lead.

Frank Vatrano scored both goals for the U.S.

“This one stings. Obviously, you don’t like to go out on a losing note,” forward Nick Foligno said. “They just played off their emotion and their power and we didn’t really have an answer.” 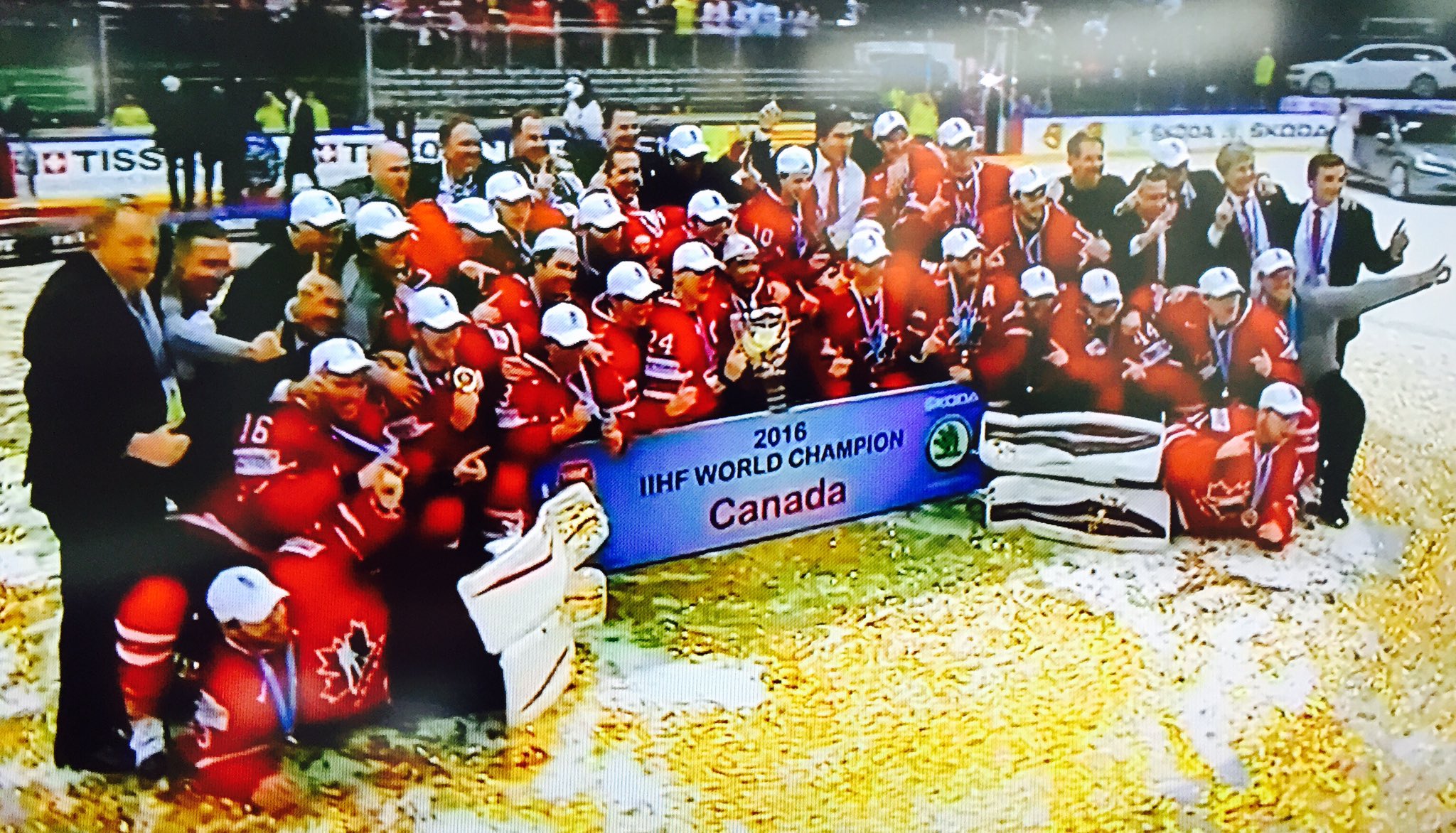