Hockey Nation Profile: Falkland Islands, the Smallest of Them All 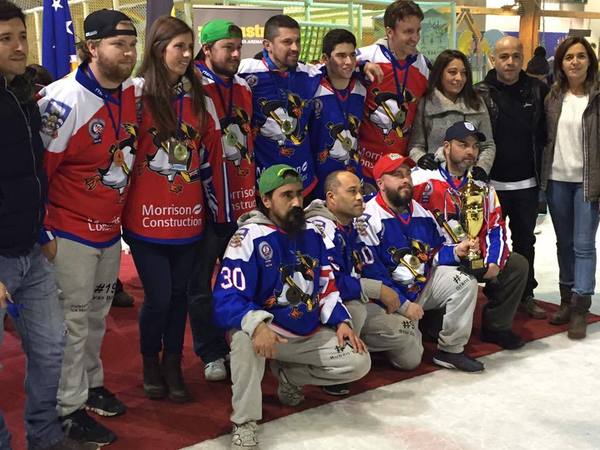 They haven’t played an official IIHF event yet. One of their top players is from California. They won their first ever game 8-2 despite never playing on ice beforehand.

Meet the Falkland Islands, the smallest hockey nation in the world.

For those not familiar with the Falkland Islands, they are one of the 14 British Overseas Territories. Another member of that group, the Cayman Islands, has played ice hockey previously, competing in the 2005 World Pond Hockey Championships in Canada.

So what business do the Falkland Islands have playing ice hockey? Well, they may seem like the ultimate underdog, but their success has been evident after just two years.

Like many hockey teams where ice isn’t easily available, the Falkland Islands got their start in DEK hockey, or ball hockey to others. DEK hockey began on the island in 2006 by a player named Grant Budd, a former British Hockey League player who went on to create the Peterbourgh Islanders, currently playing in New Zealand’s second division. The team had the funding to take part in the International Street and Ball Hockey World Championships in Newfoundland, but the team couldn’t get the 17 players needed to compete in the tournament, which truly was a shame.

Despite that disappointment, hockey has continued to grow in the small area for years. It wasn’t just adults taking part every week, as young kids started to show interest. The men’s division has four teams, all named after NHL clubs, with four teams also taking part in the youth division.

Eventually, the potential to participate on the ice became a reality. According to Martyn Barlow, the chairman of hockey on the Islands, people began to really believe in the idea of hitting the ice after learning about the 2015 Copa Inverda in Chile, the first tournament the team ever planned on entering.

Getting prepared to play on the ice took some time. Getting equipment wasn’t easy, especially in an area where specialty hockey stores aren’t a thing. Oh, and are no ice rinks in the area, so that was a problem too. Or, was it? To get ready for the 3-on-3 Copa Inverda event, the team started using inline skates and a puck to get their feet moving. With no ice to play on, they had to stick on gym floors to get used to moving around on some sort of blades.

In June of 2015, the team announced their intentions to play ice hockey. On July 2nd, at the 2015 Copa Inverda, that became a reality. It may be one of the most successful starts for a national hockey team, grabbing an 8-2 win over Santiago Yetis, the hometown team, in the opening match. With a population of just about 3,000 people, the smallest hockey nation on the planet was able to make history with the victory, one of many in the tournament.

The entire tournament proved to be a massive success for them. The team finished that up with 14-3 and 6-3 victories over the next two days, earning them a spot in the finals of the four-team tournament. With three wins in three games, the team needed just one more victory to sweep their debut tournament, something that is incredible for a team at any tournament.

Their final opponent? The Rio Grande Dragones from Argentina. The Islands had a good result against them the day before, beating them 6-3 in the final round-robin game of the tournament. With 28 goals in the first three games, the Falkland Islands had an advantage heading into the fourth and final game.

The advantage held true. For the third straight game, the Islands allowed three goals against, but their nine in the other net proved to be the difference as they were good enough to win the Copa Inverda title.

In a short period of time, and without extensive training, the Falkland Islands national hockey team were champions, and well deserving of it.

To the Future and Beyond

The 2016 Copa Inverda saw further Falkland Islands participation, with the men’s team playing in the main tournament while four youth teams battled it out in the children’s division. For the national team, the tournament started off strong, beating the Andean Club of Ushuaia easily 11-2 to open the tournament. But on July 7th, 2016, for the first time in their short time in the sport, the Falkland Islands failed to take the victory, losing 6-5 in a crazy game against the eventual champions, the Santiago Yetis from Chile. The Islands lost out on a chance to play in the finals as a result, but they still managed to beat the Drakon’s, also from Chile, 7-4 to win the bronze medal overall in the six-team tournament.

So what’s next for the Islands? The team would love to continue building their inline program so they can send teams away for national championships. Building from the grassroots level is going to be important for both ice and inline hockey, and the skills you learn in inline can transfer over onto the ice once the country has built an ice rink. Of course, that’s expensive and not always easy when a team is brand new, but it’s necessary to participate in official IIHF events in the future.

Sometimes, it’s not always about the resources or financial backing that makes a team good. In some cases, it’s about the heart the players put into it. This is a team that knows what they want and have overcome obstacles to make an impact in a short period of time. You need the commitment that the likes of Grant Budd, Martyn Barlow and all the parents that help make the program successful to have a strong base to build around in the future.

And, boy, they are definitely committed.

With 35°C (95°F) announced today in the Moroccan capital of Rabat, ice hockey may not be the first thing to come in mind for locals and tourists walking through the royal city. But going to the cool ice rink at Mega Mall is exactly what six hockey teams from North Africa will do this week.

For the first time the Royal Moroccan Ice Hockey Federation will organize the African Ice Hockey Cup for club teams that will take will start tonight in two groups of three teams followed by the semi-finals on Thursday and the medal games on Saturday. An all-star skills contest will additionally be staged in Casablanca.

This new competition and format gives many players and their six club teams from four countries the first chance to compete across their borders in a region where ice hockey is in its early development.

In Morocco ice hockey is played at malls in the capital of Rabat and a one-hour journey south in Casablanca. The one at Rabat’s Mega Mall is 40 on 20 metres and allows playing 3-on-3 games for the African Cup.

Of the four countries Morocco has reached out the most so far. The national team played in the first and only edition of the Arab Cup organized in 2008 in Abu Dhabi, welcomed teams from France and Spain in Rabat during the past few years, sent peewee teams to Quebec and was part of last year’s World Girls’ Ice Hockey Weekend.

The Rabat Capitals, the Casablanca Bears and the Morocco Mallers are the three teams from the host country to play in the event. With the biggest ice rink less than half the international size, not everything is perfect to develop the game in Morocco but the conditions in Rabat may still envy the visitors from the other three North African countries to take part in the event.

In Algeria and Tunisia no ice hockey is played and the movement to bring the sport to their countries is led by the diaspora abroad. While there are no competitions in these countries that would allow hockey to grow and give the base to form a national team, the Algerian and Tunisian hockey diaspora convened to form club teams for the tournament in Morocco.

The Algiers Corsaires will come together to represent their country in Morocco. It will be the first such game for many of the players since Algeria played in the 2008 Arab Cup. Like eight years ago the team will be led by British-Algerian forward Karim Kerbouche. All team members play abroad as there are only temporary ice rinks during the winter months at best in Algeria.

In Tunisia the hockey movement is led from Tunisians abroad, in particular by Ihab Ayed, who normally plays for the Courbevoie Coqs in the fourth tier of French hockey. It’s in the Paris suburb where Ayed organized his Tunisian team’s first game in 2014 that ended with a 6-5 win for the local team. In Rabat the team labelled Carthage Eagles will for the first time play against North African rivals.

In Tunisia like in Egypt there are ice rinks but none of them is bigger than 300 square metres, which is one sixth of the area of an international size rink. While the Algiers Corsaires and Carthage Eagles are formed of players from the diaspora in Europe and Canada, the club team from Egypt is actually based in the country where ice hockey competitions take place on the small ice rinks. The Anubis Ice Hockey Team from Cairo will fly from their country to Rabat to become the first Egyptian ice hockey team to play in an international competition abroad.

Host Morocco is the only of these countries that is a member of the International Ice Hockey Federation. The continent’s biggest country in ice hockey is 8,000 kilometres away: South Africa where ice hockey has been played since the ‘30s and that has been playing with its national teams in IIHF competitions since 1961. Additionally, neighbouring country Namibia is an affiliate member of the IIHF that has played in inline hockey.