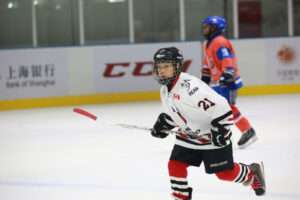 An international youth ice hockey game is held in
Beijing. Over 1,000 kids will take part in more than
300 games in nine days

Beijing has seen some sweaty days recently, but in the ice stadium, you can get the opportunity to cool yourselves off and enjoy some wonderful ice hockey games between local and foreign children.

This is one of the games of this year’s international youth ice hockey tournament in Beijing – Tiger Ice Hockey Team from China against Ice Lion from South Korea.

Both teams consist of kids who are around 8 years old, but already have been skilled and hardened.

Zhang Dongdong was a former Chinese national ice hockey player. After retirement at the age of 23, he has become an ice hockey coach to young kids.

“I love ice hockey very much. I see the team spirit and cohesiveness from it. The teammates are united as one and concentrating the efforts on every game. I really enjoy that feeling.”

Zhang stands in the waiting area, watching the game from the sidelines.

He seems confident, not a bit worried about his students.

The ongoing international youth ice hockey tournament in Beijing is of the largest scale so far in Asia. Over 1,000 kids will take part in more than 300 games in nine days.

With the rapid development of society and considerable improvement of the living standards, many Chinese parents are seeking different kinds of extracurricular activities for their children.

One of the hockey moms focuses all her attention on the game when her son is skating and competing on the ice. She is happy to see pleasant changes in her son after he started playing ice hockey.

“My kid’s performance is just normal today. I don’t think he is at his best. He started to play ice hockey when he was four years old. He used to be an introvert and didn’t like to talking too much. But now he is vibrant and lively.”

Just ten seconds after the opening whistle, the Tigers scored one point, and finally won the game 18:0 against their opponent.

But coach Zhang Dongdong says he is not surprised and it’s just a normal performance for these kids.

No.99 Zhang Tianyu is quite excited about his team’s victory. Sweat trickles down his forehead, but he is still full of vim and vigor.

“I can have fun together with my team when I play ice hockey with them. The competition is really fierce on the ice. I’m happy that I can assist my teammates. I think I get stronger after I began to play ice hockey. I even gained some weight.”

Ice hockey is not a traditional strength in Chinese sports history and does not yet have wide popularity across the country.

As the Winter Olympics approaching, some even suggested that the Chinese ice hockey team might not have the opportunity to participate in the Games in 2022.

But Zhang says he sees a bright future of ice hockey in China, as more Chinese cities started to see young kids involved in the sport.

“In the past, ice hockey was mostly popular in northeast China. Big cities in the three provinces in the northeast China might also have their own ice hockey team. Later, it gradually shifted towards the southern areas. Kids in Beijing, Shanghai, Guangzhou and Shenzhen also started to play ice hockey.”

“If we want promising development of sports, training for athletes should start when kids are young. Ice hockey is a team sport, so the more athletes get trained and cultivated, the more possibilities we can have to select excellent players and to build up a strong team.”

The 24th Winter Olympic Games is going to be held in Beijing and Zhangjiakou in north China’s Hebei Province in February, 2022. Beijing will undertake all the ice sports events.

Ice hockey, as one of the sports in the Olympic family, is getting more and more popular among Chinese people.

“I believe with the approach of 2022, more and more ice stadiums will be built in big cities and more and more kids will join the sport. It is not only because of supportive policies, but also the attraction of the sport itself, it draws people to play it and enjoy it. I believe development will get better and better.”

For CRI, this is Huang Yue.