Evgeny Dadonov scored the eventual winner in the third period as Russia held off the Czech Republic 4-3 on Thursday in the World Cup of Hockey pre-tournament opener for both teams.

Vladimir Tarasenko, Nikita Kucherov and Artemi Panarin also had goals for the Russians, who got 29 saves from Sergei Bobrovsky.

Michal Kempny, Tomas Plekanec and Martin Hanzal supplied the offence for the Czech Republic as Petr Mrazek turned away 24-of-28 shots in net.

Russia scored once on four power plays while the Czechs were 1 for 5.

Vladmir Sobotka of the Czech Republic apparently avoided significant injury in Thursday’s World Cup tuneup versus Russia.Sobotka exited the game after he was crumpled on a hit from Nikita Zaitsev, and it was reported shortly thereafter that he was headed to the hospital with a potentially broken clavicle.

However, Czech coach Josef Jandac told NHL.com’s Tom Gulitti after the loss that the injury is not serious, and Sobotka could dress in Saturday’s rematch.

It’s believed Sobotka, who’s spent the last two years in the KHL, could reunite with the St. Louis Blues this season.

Finland picked up the first win of the 2016 World Cup of Hockey — in pre-tournament play, anyway.

The Finns took down their rivals from Sweden on Thursday in overtime in front of a hometown crowd at Hartwall Arena in Helsinki, winning 3-2 in their first tune-up.

Olli Maatta scored the winner on a wrist shot that went in off the post with 42.9 seconds to go in OT, securing the win for the Finns, who are one of the youngest and most inexperienced teams in this tournament.

The teams meet again Sept. 20 in Toronto, and if this tilt was any indication, it’ll be a barn-burner. (Also, Henrik Lundqvist will be in net for Sweden. He was a healthy scratch Thursday).

Here are our takeaways from this pre-tournament matchup:

3-on-3 OT is a treat
Watching Erik Karlsson along with Daniel and Henrik Sedin do whatever they want on the ice in overtime in the 3-on-3 format is really fun. For much of OT, Finland was just watching. Goalie Pekka Rinne stood on his head and the Finns really didn’t get the puck out of their end until the final rush, when Maatta scored. Until then it was tic-tac-toe plays, and Swedes wheeling around like they were playing against a Peewee team. Overtime is going to be one of the best things about this tournament, no matter what team you’re watching. A side note: We ought to soak up watching the Sedins on the international stage, because who knows how many more chances we’ll get. The twins turn 36 during this tournament.

A not-so-pre-tournament feel
Aleksander Barkov punched Karlsson in the face right in front of a ref, Gabriel Landeskog followed up a high check with a cross-check, and Leo Komarov started a scuffle in front of the Swedish bench — who said this was a tune-up? There’s a long standing rivalry between these two countries, and you could see it from the drop of the puck, and by way of the many slashes and cross checks doled out after the whistle. The tempo was up right out of the gate, too. Watch Karlsson streak up the ice on a rush and it’s as if summer never happened.

Jets fans, rejoice
Patrik Laine didn’t score a hat trick or undress Victor Hedman or convert on any of his chances on the power play, but the 18-year-old from Tampere was definitely noticeable out there. It’s probably because he’s six foot five, very fast, and he has filthy hands. Did you know his nickname back home is Patsyuk? (Get it?) The second-overall pick in the 2016 NHL Draft is going to look awfully good in a Winnipeg Jets uniform in a few weeks from now.

Swede D
Have you seen Sweden’s defence? It’s ridiculous. First off, they didn’t have their No. 1 in goal for this one. And a couple giveaways did lead to two goals in regulation. But you could probably do OK with a midget goalie back there when you have Karlsson, Hedman, Anton Stralman and Oliver Ekman-Larsson on the blue line. Hedman put it best when he told reporters before the game: “Obviously our D core is obviously looking pretty good.” Obviously.

Refs are warming up, too
There were some interesting calls in this one, and let’s blame the summer holidays. You could see Carl Hagelin wondering for a while where that hooking penalty he got came from. Ekman-Larsson scored on a top-shelf wrist shot and it was called back for interference, but it was tough to tell where the interference happened. All we know is a Finnish ref saw it, and since there are no video replays, the call on the ice stood. The good news about all the calls is that we got to see a lot of power plays, which is spectacular with this level of talent out on the ice.

Stage-setter
With Finland edging Sweden in this one, the table is set for their round-robin meeting on Sept. 20. Lundqvist will be a massive difference-maker, and you have to like Sweden to win that one. This team is awfully good, even though they didn’t come away with a win Thursday. Before the game, Karlsson was asked about their weaknesses: “I don’t think we have any,” he said. 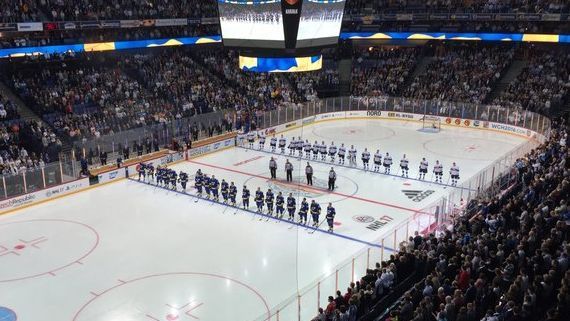 After a nine-month deployment, playing a hockey tournament in the Kuwaiti Desert, no matter the 0-15 loss, will be a lasting memory for a battalion of the Minnesota National Guard Soldiers.
U.S. Army Central’s 682nd Engineer Battalion – nicknamed Task Force Wild after the Minnesota Wild of the National Hockey League– played the Kuwait National Hockey Team in the first inaugural Desert Classic tournament Aug. 6 in downtown Kuwait City’s Ice Skating Rink.
The tournament pitted three military teams, playing in red, white and blue uniforms supplied by the Kuwait Winter Games Club, in an elimination-format playoff.
It was a hockey dream on a final desert night for the cold-weather Soldiers getting ready to go back home.
“It is kind of surreal,” said Sgt. Michael Goette, 24, of St. Paul, Minn. “(Minnesota) is the state of hockey. They came out here, saw we were Task Force Wild and asked if we wanted to play hockey. We didn’t even know there was a rink in Kuwait, so it is pretty phenomenal.”
The game was organized by U.S. Army Central Host Nation Affairs and Camp Arifjan Morale, Welfare and Recreation Center with the Kuwait Winter Sports Club, who support Kuwaiti national athletes in Olympic and International competition.
Some of the U.S. Soldiers had played hockey in high school, but many of the U.S. players were taking the ice for the first time in the friendly competition. The tournament was limited to light contact and shorter games.
The opening game set the stage for an exciting night.
After being down 5-3 the Blue Team mounted a comeback in the final minutes, tying the game and forcing an overtime shootout. The Blue Team would win the first game in dramatic fashion in front of a packed arena and live on Kuwaiti national television.
Sgt. 1st Class Saara Lock, an operations sergeant in the 682nd Engineer Battalion, was playing her first night on ice as a goalie. When the final shot attempt came down to her, she stood her ground in the goal to win the opening game for the Blue Team.
“It was a once in a lifetime chance,” Lock said about playing in the tournament.
Even suiting up was an experience for Lock, who was equipped with goalie pads from the Kuwaiti team before the game.
A teenage Kuwait team equipment manager helped Lock gear up.
“To me, it is really exciting working with the Kuwaiti players and staff,” Lock said. “I would have never known how to get any of that stuff on, but the equipment manager just said ‘sit’ and he got me ready.”
Lock said the tournament was a great way to get a break from her work routine and bond with the local Kuwaitis.
The Kuwait National Hockey Team took to the ice with class in the second match, unveiling a rink-width banner with a United States flag saying: “Thank you for your support throughout the years.” The two nations have been continuing partners in the Middle East for more than two decades.
The Kuwaiti team showed the skills that make them an International Hockey Federation level team throughout the next two games with a strong offense and stingy defense, slapping an 8-0 win against the U.S. Red Team and winning 15-0 in the championship game against the Blue Team. The outcome was respectable considering in 2011 the Kuwaiti team defeated the Indian National Hockey Team, 39-2.
“We just played hockey in the summer, in the Kuwaiti desert when it is over 100 degrees outside – it was incredible,” said Capt. Mike Lovas, the Higher Headquarters Company commander for the 682nd Eng. Bat. “It doesn’t matter what the score was. It was a good will event with a partner nation: they are an incredible team – incredible people – and we had a blast.”

Players from the Blue Team of the 682nd Engineer Battalion, Minnesota National Guard.