From Dominant To Desperate 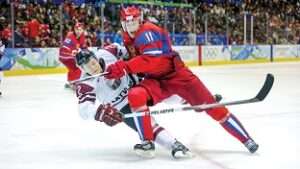 Once a hockey powerhouse, Russia now risks dropping out of the top tier unless it can win a major tournament—and soon

The Kozel beer mugs and hamburger sliders are on full display, but the bags and boxes make it hard to know precisely what other gifts are on offer.

A hint might be found in the fact that Mats Naslund has travelled from the visitors’ dressing room down the hall to briefly interrupt Slava Fetisov from his press duties so the latter can put his signature on a bottle that almost certainly doesn’t contain water.

After receiving an appreciative nod from the Swede, Fetisov returns to his interaction with the gaggle of reporters who’ve flocked to him. It’s an off-day in Moscow at the 2016 World Championship, but fans have still been treated to some hockey in the form of an old-timers game, and they took great delight in watching Fetisov and his countrymen defeat a team of international stars.

One of the heartiest roars of the night occurred when Fetisov, a hard-rock defenceman in his day, deftly deked goalie Ari Sulander on the type of penalty shot they award for a soft trip in these lighthearted contests. Though a language barrier makes it impossible to know, it seems Fetisov’s Russian discussion after the game carries a little more weight than what happened on the ice.

There’s been a palpable tension in the city as Team Russia, with a semifinal match set for the following day, attempts to win a tournament every European country takes very seriously, especially when hosting.

The Russians even altered the Kontinental Hockey League schedule so the season would end earlier and the national team would have more time to prepare. Though Fetisov had no direct hand in putting the squad together, he’s one of a few people whose names are inexorably linked to hockey in Russia.

In 2002, he began a six-year stint as President Vladimir Putin’s minister of sport, and when the conversation flips to English, Fetisov speaks about the challenges he faced in that role after the nation’s most cherished game fell into disrepair following the crumbling of Communism.

“The system was destroyed,” he says. “The people around the hockey program was f–kin’ crooks, and it’s not easy to get back on the highest level.”

Russia’s return to the top of the podium always seems in play thanks to an unbroken line of elite talent.

The country has medalled at the past six World Junior Championships and is home to the game’s uncontested best goal-scorer as well as the NHL’s reigning rookie of the year. But the exploits of Alex Ovechkin, Artemi Panarin and a dozen other dazzling wizards sometimes belie the reality that Russia’s overall talent pool has dried to disconcerting levels, something that’s become unmistakable at events where the planet’s best players gather.

Since NHL Olympic participation began with the 1998 Nagano Games, Russia has just two medals—a silver and a bronze, both won more than a decade ago—to show for its five entries.

Its last appearance featured a humiliating fifth-place finish in front of Putin in Sochi. Eight of the 12 best-on-best hockey tournaments held to this point have been won by Canada, while Russia, the U.S., the Czech Republic and Sweden have each claimed one. The Russian victory, however, technically belongs to the Soviet Union and came 35 years ago at the 1981 Canada Cup.

With the current iteration of that event, the World Cup, set to return this September in Toronto, no group is in more need of a reaffirming win than the sporting sons of Fetisov and Vladislav Tretiak. Russia’s problems might not all be bear-sized, but stickhandling to a better place will take some doing. Until they can, their place in any conversation of hockey’s true upper crust will increasingly be in peril.

It’s never easier to believe in Russian hockey than while being mesmerized watching Panarin play on a line with his former KHL teammates Vadim Shipachyov and Evgenii Dadonov. The trio was a spectacle unto itself at the worlds, finishing 1-2-3 (Shipachyov, Panarin, Dadonov) in scoring.

They had previously skated together with SKA St. Petersburg, and their chemistry not only carried over, it transported people to a different time.