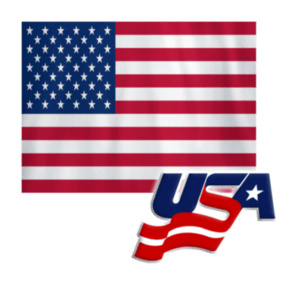 Jay Varady (Cahokia, Ill.) has been named head coach of the U.S. Junior Select Team that will participate in the 2016 World Junior A Challenge from Dec. 11-17, in Bonnyville, Alberta, it was announced by USA Hockey.

Serving as head coach at the 2014 World Junior A Challenge, Varady helped guide the U.S. Junior Select Team to its sixth title in seven years at the event. He was also the video coach for the gold medal-winning 2010 U.S. National Junior Team and assistant coach of the 2010 U.S. Under-18 Select Team that took second place in the 2010 Ivan Hlinka Memorial Cup.

Varady is in his fourth season as head coach of the United States Hockey League’s Sioux City Musketeers. He has led Sioux City to a pair of Clark Cup Playoffs appearances in his first three seasons, including a record-setting 2014-15 campaign in which the Musketeers tied its franchise record with 38 wins.

Before joining Sioux City, Varady was the head coach of the Les Ducs D’Angers of France’s Ligue Magnus for two seasons (2011-2013). He also served as an assistant coach, associate coach and interim head coach for the Everett Silvertips in an eight-year span from 2003-2011. Varady began his coaching career as a volunteer assistant coach at his alma mater, Union College, during the 2000-2001 season.

Bittner is currently in his first season as the associate head coach of the USHL’s Dubuque Fighting Saints. He previously served as an assistant coach for the University of Wisconsin (2015-16), USHL’s Tri-City Storm (2013-15), ECHL’s South Carolina Stingrays (2011-13) and his alma mater, Ohio State University (2008-10).

Hartsburg is in his third season as head coach of the USHL’s Lincoln Stars after leading the club to 33 wins and a Clark Cup Playoffs appearance in 2015-16. Prior to joining Lincoln, Hartsburg served one year (2013-14) as an assistant coach for the Erie Otters and four years (2009-12) as an assistant for the Everett Silvertips. Hartsburg began his coaching career as an assistant with the Colorado Eagles of the Central Hockey League in 2008-09.

With the Russian National Team finishing up their trip stateside, Liudmila Belyakova decided to throw a going away party. Unfortunately for the Connecticut Whale, Team Russia brought the fireworks.

Belyakova scored the opening goal and Nadezhda Morozova added 24 saves as Russia defeated Connecticut 3-2 in the final preseason game for both teams.

Angelina Goncharenko scored the game winning goal on the power play in the second period for Russia. Yekaterina Smolentseva scored the second goal and picked up an assist while Olga Sosina added two assists.

Kelly Babstock and Kelli Stack each scored a goal for Connecticut. Nicole Connery and Haley Skarupa each chipped in an assist.

“I think in the third period we (started to) come together,” said coach Heather Linstad. “Their goalie played very well.”

New night, same strong start for Russia as they flew onto the ice.  Olga Sosina dumped the puck around the boards to Smolentseva behind the net. She found Belyakova in the slot unattended and Belyakova put it past a sliding Stock to give Russia the early 1-0 lead.

That same defensive breakdown for the Whale continued into the first. Team Russia managed four shots uncontested right in the slot, with Stock coming up big to stop the last three.

She couldn’t stop Smolentseva later in the first, as a Russian turnover at the Russian blue line turned into a breakaway. Fanuza Kadirova gathered the puck and sent it up to Smolentseva, who beat Stock five-hole to give Russia the 2-0 lead in the first.

Stock held down the fort as best she could as the period ended with the shots in favor of Team Russia 12-8.

The second period, however, was marked by special teams. Nicole Kosta drew a crosschecking penalty on Anna Shibanova with eight seconds left in the first, putting Connecticut on the power play to start the second.

The Whale quickly capitalized as Skarupa looped a pass between two defenders to Stack, who finished on the partial breakaway to make it 2-1.

Their effort would go for naught, as Morozova locked down her crease with multiple pad saves. She was key as Russia killed off two more power plays before heading to their own advantage.

Anya Battaglino took a penalty after being pressured on the forecheck, and Russia setup by bombing the Connecticut net. Eventually, a point shot by Goncharenko knuckled its way over the blocker of Shenae Lundberg to give Russia the 3-1 lead heading into the second intermission.

The Whale resumed their possession game early in the third period. After a series of extracurriculars in front of Morozova, Russia sent two players to the box for roughing to Connecticut’s one, giving the Whale a power play. It was further advantageous for the Whale when Elena Dergacheva took a tripping penalty only 19 seconds into the original Whale power play.

Babstock scored the 5-on-3 goal to cut the deficit to one with 3:09 left to play in the third. Connery took a point shot from Molly Engstrom into her gear but managed to swirl it in front through the crease. The puck bounced around before finding its way to Babstock, who found a wide open net and a power play goal.

The Whale continued to spare (spar?) the Russian net, but Morozova continued to shine on her way to being named the second star of the game. She stayed firm as Team Russia withheld an onslaught of shots in the final 1:30 with the Whale net empty.

There had always been something rooted deep in Canada’s hockey DNA that required our best players to flirt with disaster before eventually delivering glory.

We dug a hole in the 1972 Summit Series. We fell behind 3-0 in the final game of the 1987 Canada Cup. We had a loss and a tie early in the 2002 Salt Lake City Olympics. We needed to play an extra qualification game just to reach the quarter-finals at the 2010 Olympics in Vancouver.

And then this group came along and completely rewired what it meant to be Team Canada.

They will be remembered for a level of best-on-best dominance never before seen. In games featuring the world’s top players and the slimmest margin for error, they produced something approaching perfection.

Even in a tense and tight final series with Team Europe, where late goals from Patrice Bergeron and Brad Marchand were needed to capture the World Cup, there was a purpose and a belief and a level of execution that no other team in the world could match.

“You start these tournaments all the time and they’re always saying ‘this team’s good and that team’s good,”’ said Babcock. “You know in the end, you’ve got to deliver. And you can say anything you want about the game tonight, but we delivered.”

This group? They always do.

It goes much deeper than the 16-game winning streak they’ll carry into the next best-on-best event, which at this point is denoted by an asterisk and “TBD” on the international calendar.

Look at this roster. Look how these players have performed with a Maple Leaf on the front of their sweaters – whether at the Olympics, world junior tournament, IIHF World Hockey Championship or this World Cup.

He was the one dragging three Europeans in his direction on a solo short-handed rush just before setting Marchand up for the winning goal with 43.1 second left in regulation. He embodies the “we before me” spirit at the heart of this team.

“I think it’s hitting us right now how special this really is,” said Toews, wearing yet another championship cap. “All tournament the talk has been that there hasn’t been a whole lot of challenges for our team. That’s what it looks like from the outside. You ask around our team and that’s not necessarily the case.”

Sidney Crosby is now 45-5 in games with the national team.

Babcock referred to the captain as a “serial winner” after watching him get named tournament MVP and pick up his tournament-best 10th point in Wednesday’s victory.

“Sid’s unbelievable,” said Babcock. “You’re pretty fortunate to get to hang around with him.” 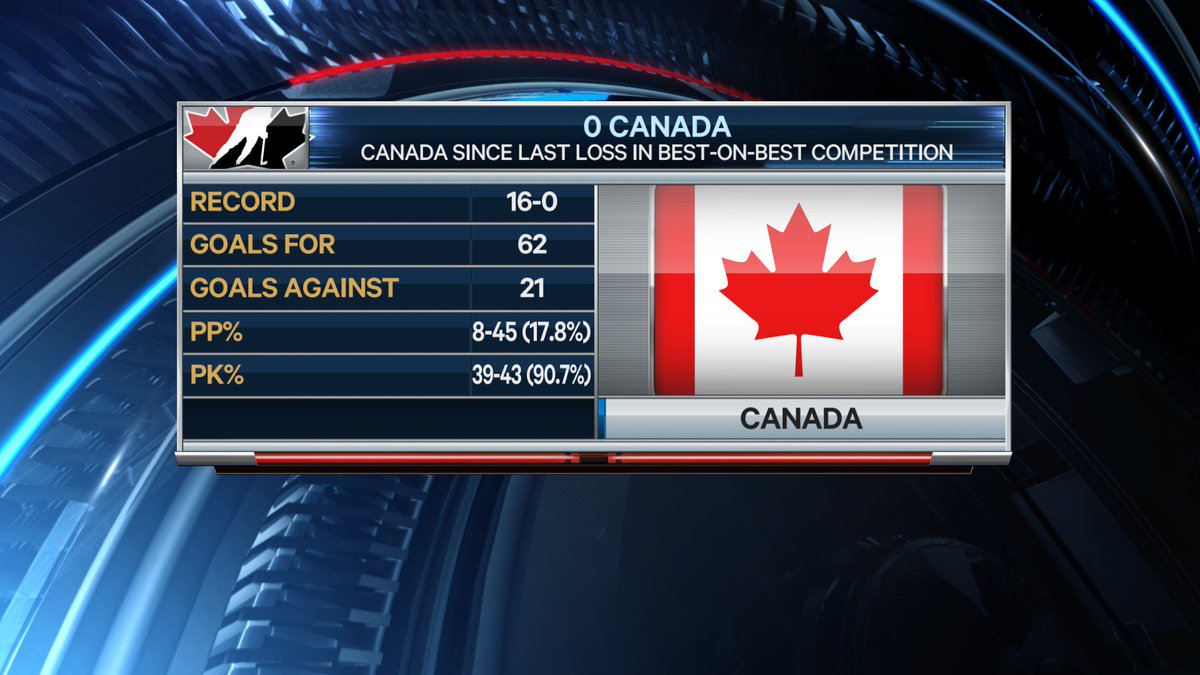 Canada’s dominance in best-on-best competitions since losing to the USA in prelim round of 2010 Olympics.

It doesn’t end there.

Carey Price is now 16-0 in starts at the World Cup, Olympics and world junior tournament, and had to be at his best for Team Canada to sweep Europe out of this final. The save he made on Marian Hossa in the dying minutes paved the way for a dramatic victory.

It’s little wonder why the confidence never wavered even as the possibility of a do-or-die Game 3 hung in the air.

At its core, hockey is a game of bounces played with a frozen piece of rubber on ice.

That’s why it’s unreasonable to expect any one country or team to have a run of success like this one. The game was born here and is cherished most deeply here, but that doesn’t grant Team Canada immunity from the things that can go awry when you’re in a must-win situation.

The roots of this team can be traced back to the 2005 world junior tournament, where Canada crushed its opposition and started a golden five-year run at that event. Those players are now in the primes of their careers and adding to their unparalleled international resumes.

Even with a generational talent like Connor McDavid on the horizon, it will be a tall task for the next generation to go through tournament after tournament without so much as losing a game.

“The perception is that we’re miles better than everyone else,” said Babcock. “I think our country’s deeper, but you only get to play five guys at a time. … That’s what I said to the guys tonight: ‘I’m proud of you; I’m proud that we’re building hockey players to follow you, they want to be the next one. We keep celebrating success.’

“And the only way you get to celebrate being the best in the world is when you prove it, and so we’ve been fortunate to do it many times.”

We should all take a moment to stop and appreciate what they’ve accomplished.

Team Canada has won nine of the 13 best-on-best tournaments ever held, but it has never been such a machine. The perfect mix of talent and preparation and focus.

A rebooted World Cup came with new challenges – the September start, stronger hybrid opponents like Team Europe to overcome – but it ended in familiar fashion. With the Canadian flag being raised to the rafters and “O Canada” being played over the intercom.

“The game is getting bigger all the time each and every year, but we’re still getting better than every other country,” Wayne Gretzky said earlier this week. “Everybody always gets nervous and scared (wondering) ‘are we losing our game?’ But we’re never going to lose our game. It’s Canada’s game, it’s Canadians.

“I’m just so impressed by how much depth and how many good hockey players we have in this country now. We seem to be getting even better and stronger, which is pretty incredible.”