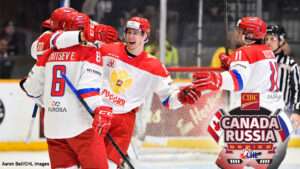 The first ever CIBC Canada Russia Series contest in North Bay was an exciting one, but Team OHL came out on the wrong end of a third period scoring flurry as Russia skated to a 4-3 victory.

Kirill Urakov scored the deciding goal with 5:26 to spare in the third period, giving Russia a 5-4 series lead in points headed into Game 4 in Hamilton on Monday.

The OHL outshot Russia 32-25 but couldn’t come through late as Russia hung on to wrestle back control of the series.

Team OHL put the pressure on early, registering the first three shots of the game, but Russia would strike first on a funny bounce in the slot just 5:25 into the first frame.

Rubtsov took a low shot from the high slot that got past OHL goaltender Evan Cormier (Saginaw Spirit), glancing off the skate of one of his own defenders out front.

Team OHL would draw even on the power play two minutes later on a perfectly executed passing play. St. Louis Blues prospect Jordan Kyrou (Sarnia Sting) dished the puck down low to Owen Tippett (Mississauga Steelheads) who quickly found Mississauga teammate Michael McLeod in the slot as he chipped a quick shot over the shoulder of Sukhachev at 6:22.

The Russians picked up the pace in the latter half of the first. Rubtsov was left alone in the slot, taking a feed from linemate Pavel Karnaukhov before waiting out a sprawling Cormier to score his second of the night at 15:54.

Russia carried a 2-1 lead into the first intermission while Team OHL led 8-7 on the shot clock.

Team OHL came out of the gate firing in the second as Sukhachev was forced into a trio of big saves, denying Adam Mascherin (Kitchener Rangers), Gabriel Vilardi (Windsor Spitfires) and Jordan Kyrou (Sarnia Sting) on quality scoring chances.

After a quiet first half of the period at his end with Russia generating just one shot on goal, Cormier was solid in the latter half, keeping the OHL within one as he turned away Artur Tyanulin (Ottawa 67’s) on the doorstep. Nikita Li would be denied twice in the final three minutes of the second, keeping the OHL within striking distance headed into the final stanza.

Russia climbed out to a 3-1 lead 6:02 into the third as Dmitry Sokolov (Sudbury Wolves) was the beneficiary of a strong play below the goal line by linemate Kirill Belyaev who won a puck battle before dishing to the slot. Sokolov, a Minnesota Wild prospect and 30-goal scorer with Sudbury last season, took some of the energy out of the Memorial Gardens with the insurance marker.

The OHL power play would click for a second time beyond the midway point of the third as Florida Panthers prospect Adam Mascherin (Kitchener Rangers) brought the Gardens to its feet. Team OHL drew to within a goal as Mascherin jumped on a rebound off the end boards on Owen Tippett’s wrister that went wide at 7:48.

The flurry of scoring continued 24 seconds later, breaking the 3-3 deadlock as Russia regained the lead. Danila Kvartalnov and Kirill Urakov teamed up for bang-bang chances in the goalmouth, with Urakov burying on the rebound at 14:33.

The OHL put forth a late push, but couldn’t convert as Russia came away victorious in Game 3, improving to 5-4-0-0 against the OHL over the past five years.

Tippett earned OHL Player of the Game honours in the loss, recording two assists on the night.

The two sides clash again on Monday at FirstOntario Centre in Hamilton as Game 4 of the 2016 CIBC Canada Russia Series is live on Sportsnet at 7:00pm ET/4:00pm PT. 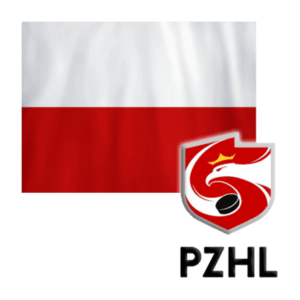 By Ben Leeson – The Sudbury Star

Alan Lyszczarczyk is eager to pull on the white-and-red jersey of team Poland once again.

The Sudbury Wolves forward will leave on Dec. 5 to join the Polish under-20 team to prepare for the the IIHF World Junior Division I Group B Championship, to be played in Budapest, Hungary on Dec. 11-17.

“I will try to make the team and help the guys win this tournament,” said Lyszczarczyk, 18, who hails from the city of Nowy Targ. “I am happy to be playing for Poland. It’s my country.”

Lyszczarczyk will play for the Wolves against North Bay on Dec. 2 and Barrie on Dec. 3 before departing for Europe.

The Poles will vie with Hungary, Great Britain, Italy, Slovenia and Ukraine for a promotion to Group A, one step down from the top division where Canada competes.

“This one is a little but different,” he said, comparing the level of play in the Group B championship to the OHL. “The hockey is not as fast or as strong, so the game might be a little bit easier, I don’t know, but these guys will be playing for their country, so they will play hard every game.”

Lyszczarczyk, along with his agent and Wolves management, decided to skip last year’s world junior tourney to focus on his development, but he did wear Polish colours for the IIHF World Under-18 Division II Group A Championship, played in Brasov, Romania on April 4-10.

He collected 12 points in five games to finish in a tie for the tournament scoring lead and help Poland earn gold and a promotion to Division I for next year.

While the Polish Ice Hockey Federation has not yet announced its U20 roster, it will likely include many of Lyszczarczyk’s U18 teammates and longtime friends.

“I am happy to see them again,” he said. “A lot of the guys are from my city, so I am friends with them.”

He isn’t quite as pleased with his start with the Wolves this season. One of the the Wolves’ leading scorers with 50 points in 2015-16, he’s off to a relatively slow start with four goals and seven assists in 17 games this year, good for sixth among Sudbury skaters.

“I want to play better,” he said. “I want to try to shoot more, because sometimes I have chances and I pass it, so I will try hard right now and play better.”

“I think we expect more out of Al, but he set the bar,” Matsos said. “Coming in as a first-year guy and a free agent, you get 17 goals and 50 points, we’re expecting big things out of you.

“We’re not disappointed in him as a person, he’s a great kid and he does everything right, he works hard, but he has had a slow start.”

Matsos agreed that firing pucks on goal rather than looking to set up teammates may benefit the second-year forward. It did last weekend, when Lyszczarczyk centred from behind the net and banked a puck off Mississauga Steelheads netminder Matthew Mancina to end an eight-game goalless drought.

“There’s nothing selfish about putting pucks to the net,” Matsos said. “Normally, good things happen. I don’t think we always need to find that perfect, pretty play with the team we got. Sometimes, less is more.”