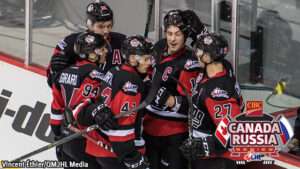 For the first time in seven years, the CHL has claimed back-to-back series titles, climbing ahead of Russia 10-5 in points heading into the sixth and final game on Thursday in Baie-Comeau, QC.

The win marks the QMJHL’s first shutout victory in the 14-year history of the event as Carolina Hurricanes prospect Callum Booth (Quebec Remparts) stopped all 16 shots he faced to write his name in the record books.

The QMJHL scored twice in both the second and third periods as Nicolas Roy (Chicoutimi Sagueneens) and Thomas Chabot (Saint John Sea Dogs) also found the back of the net.

With a lead, the QMJHL held Russia to just three shots on goal in the game’s final 20 minutes to secure the victory before a crowd of 3,146 at Centre Georges Vezina.

Russian goaltender Vladislav Sukhachev provided his team with some timely saves to start the night, coming up with a shootout denial of QMJHL captain Pierre-Luc Dubois 12:20 into the first period.

The QMJHL outshot Russia 10-6 in the first, getting a few close chances from close quarters as Sukhachev was forced to stand his ground on a number of goalmouth scrambles.

The Russians nearly took the first lead of the night three minutes into the second as Alexander Shchemerov found Alexander Volkov with a stretch pass, sending the big winger in for a scoring chance that was turned aside by Booth. Gatineau Olympiques forward Yakov Trenin had a golden opportunity a shift later, but Booth stood tall once again to keep the game scoreless.

Team QMJHL broke the offensive silence with 4:07 remaining in the second as Alexandre Fortin (Rouyn-Noranda Huskies) retrieved the puck below the goal line on the forecheck, quickly dishing to Dubois who found a wide open Gauthier coming down the middle for a one-timer.

Nicolas Roy tacked on an insurance marker before the second expired, bringing the hometown crowd to its feet as he finished off a well-orchestrated passing play with Gauthier and Dubois at 18:42.

A heavy shot from Ottawa Senators prospect Thomas Chabot (Saint John Sea Dogs) gave Team QMJHL a 3-0 lead 5:22 into the third frame. Chabot took a cross-blue line feed from Samuel Girard (Shawinigan Cataractes) before using his time and space to rip a slapshot over the glove of a screened Sukhachev.

Gauthier saved perhaps the best of the night for last, bulldozing his way around a Russian defender down the left wing before tucking his second of the night past the outstretched pad of Sukhachev with just 1:17 remaining.

Gauthier earned QMJHL Player of the Game honours with his two goals.

The QMJHL held Russia to 0-for-2 on the power play, stretching their series drought on the man advantage to 0-for-15.

The win marks the 11th series victory for the Canadian Hockey League in 14 years of the CIBC Canada Russia Series.

The QMJHL improves to an all-time record of 15-9-3 against Russia.

Game 6 of the series is set for Thursday night at Centre Henry Leonard in Baie-Comeau, QC at 7:00pm ET/4:00pm PT. Be sure to catch the action on Sportsnet ONE and TVA Sports 2.