For 15 years since it was founded in 2001, the Singapore Ice Hockey Association (SIHA) has not enjoyed much recognition. But that may change this year, if SIHA has their way.

For the first time ever, the Singapore national men’s ice hockey team is slated to participate in two additional competitions –  the Asian Winter Games (AWG) in Sapporo, Japan, in February, and the Southeast Asian Games (SEA Games) in Kuala Lumpur, Malaysia in August.

The team usually competes at the yearly International Ice Hockey Federation (IIHF) Challenge Cup of Asia, which will be held in Kuwait this March.

UN-ranked in the IIHF world rankings, the team is not expected to clinch a podium finish. Still, they are looking to spring a surprise or two, said captain Michael Loh.

Loh, 41, has been part of the national team since it was formed in 2008 and has 20 years of playing experience. While he acknowledged that Singapore is still behind its peers in the sport, he feels that the gap is closing.

In the AWG, Singapore is grouped in Division I, the second tier behind the Top Division which consists of top ranked countries in Asia. Only the United Arab Emirates is ranked in Division 1, which also consists of Hong Kong, Chinese Taipei, Malaysia and Thailand.

“All these countries, we’ve played them before,” Loh said. “Our margin of defeats over the years go by, it’s getting smaller. All I can say is that for every game, we will do our best to spring a surprise.”

His thoughts were echoed by Ryan Tan, the youngest member of the team at 17.

“I recognize that there are definitely challenges, but I find that there [is] no fear. We just have to skate harder, play harder, be smarter and work better together as a team,” the Raffles Institution student said.

“If we can do that, I don’t see why we cannot take on the stronger opponents.” 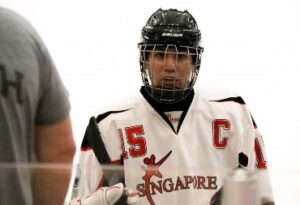 Captain Michael Loh is the oldest player in the national team at age 41.

Preparation for the upcoming tournaments is proving to be challenging though.

There is only one ice rink – The Rink at JCube – available for training and friendly matches.

Players have to share time on the ice with not just the public, but also two other sports – figure skating and short track speed skating.

In order to save costs, the players train regularly into midnight five to six times a week, sacrificing sleep time. It is not an easy task, given that most hold full-time jobs, or are still studying.

“We are doing as much as we can,” SIHA president Alphonsus Joseph told Yahoo Singapore. “It’s always hard to find ice time and we can only do it at indecent hours.

“It has become normal… Next day, everyone has to go to work, but it’s just part of the sacrifice for being in the national team.”

An opportunity to grow the sport

SIHA views 2017 as the best opportunity to bring awareness and grow the sport in Singapore.

The association is also hoping that their participation in more tournaments this year will attract more sponsors and donors.

Sweden has been the best team in this tournament since the beginning. They have only trailed for 15:41 of the WJC and that was oddly enough against Finland. That domination continued in the quarters as they absolutely demolished Slovakia.

By the 13:07 mark of the second period, it was already 5-0 Sweden. They did receive a bit of a scare as the Slovaks managed to score three straight goals to make it 5-3. That was all Slovakia could muster as Sweden went on to score another three goals to ease into a 8-3 victory.

Canada looked good in the preliminary round all the way up to New Year’s Eve when they faced the US. Their offense was shut down almost perfectly and the 3-1 loss resulted in them finishing in second in Group B. They did, however, get an opponent that they had dominated in the pre-tournament in the Czech Republic because of that loss.

The Czechs put up a bit more of a fight in this one, though. They scored the first goal and even when they started trailing, they kept it close for pretty much the rest of the game. It was not enough though as Canada would move on to the semi-finals with the 5-3 victory.

Canada is going to have their work to cut out for them if they want to get to the Gold Medal game. After last year’s disappointing finish, Sweden is not an opponent you want to be facing until the final. This should be a very close game, possibly the best of the tournament.

We have a age-old rivalry in this match-up as the USA takes on Russia. This will be the second match-up between these two teams in this tournament as the Americans beat Russia 3-2 on December 29.

The US dominated against Latvia and Slovakia but locked it down defensively against Russia and Canada. Knowing that they have already won twice against strong opponents should give them a confidence boost for this game. However, they did just scrape by the Swiss as Nico Hischier single-handedly brought his team back from 2-0 down to tie the game. Unfortunately for the Swiss, they took a bad penalty just after tie the game and Jordan Greenway quickly took advantage and made it 3-2.

The Russians had largely underachieved throughout the tournament, losing to both Canada and the US. They did probably get the easiest opponent in the quarters however as Denmark surprised a lot of people. That run ended against the Russians as they were completely outclassed as Russia cruised to the 4-0 victory.

Russia might have been underachieving, but Kirill Kaprizov has been one of the best players in this tournament. The Russians will need him and his line to be on top of their game to stand a chance against the US.

Finland booked its ticket to the 2018 IIHF World Junior Championship in Buffalo, New York with a 4-1 relegation win over Latvia in Game Two on Tuesday night.

The Finns won Game One of the best-of-three series 2-1 at the Bell Centre on Monday.

Assistant captain Villi Saarijarvi got the third-period winner for Finland and added an assist. Juuso Valimaki scored twice, and Eeli Tolvanen chipped in a goal and an assist, while Aapeli Rasanen had two helpers.

“We were finally able to score,” said Finnish captain Olli Juolevi about the third period. “After we scored the first goal, they were probably a little bit frustrated after that and they took those bad penalties there. That helped us to secure the win. Still, it was not a good game, but that’s not the big thing right now. The big thing is we finished the series 2-0 and we are finally off.”

The Finns finish ninth, their worst placement in any IIHF competition since 1955. Last-place Latvia is demoted to the 2018 IIHF Ice Hockey U20 World Championship Division I Group A.

“We’ll be back,” said Krastenbergs. “We’ll go [to Division I] next year, we’ll win, and we’ll come back better.”

The placement was a major disappointment for Finland after winning gold on home ice in Helsinki last year. The Finnish federation’s decision to fire coach Jukka Rautakorpi and replace him with Jussi Ahokas mid-tournament was unexpected. But it worked out as well as it could under the circumstances.

Ahokas led Finland to 2016 U18 gold in Grand Forks, North Dakota in April. Rautakorpi had seen declining results at his previous three World Juniors, finishing fifth in 1999, sixth in 2008, and seventh in 2009.

Offensively cursed, the Finns totalled just 12 goals in six games. It was their second-worst World Junior output ever. In 2015, also in Montreal, they had eight goals in five games.

“There was pretty much zero confidence after those first three games,” Juolevi said of losing to the Czechs, Danes, and Swedes. “It was tough. But we stayed together and we believed we had to be patient and we could score those goals, especially in the last two games. It was not easy when you can’t score that many goals.”

Latvia, which has 13 roster members playing in North America this season, was participating in its sixth elite World Junior Championship. Only twice in history have the Baltic underdogs avoided relegation (2009, 2012).

Finland drew first blood. On an early 5-on-3, Tolvanen cruised into the high slot and winged one under the crossbar at 1:31.

The Latvians hung tough and tied it up on their second man advantage with 3:37 left in the first period. Krastenbergs dued up a wrister from the faceoff circle that zipped through Vehvilainen. It was the Oshawa Generals forward’s third goal of the tournament.

Finnish defenceman Jesper Mattila went off with an apparent lower-body injury less than a minute later after Rihards Puide caught him with a knee on the forecheck. However, Mattila would return to the game.

“It’s been a tough ride for us,” said Mattila.

The Finns struggled to put their Baltic rivals away. With under six minutes to play in the middle frame, Latvia got a two-man advantage for 1:38, but Vehvilainen held down the fort.

Ahokas’s troops couldn’t capitalize with their subsequent power play before the second buzzer. Julius Nattinen had the best late chance, ringing one off the post.

Finally, at 1:28 of the third, Saarijarvi hammered a power play one-timer from the centre point to put Finland up 2-1. Mitens battled to stem the rising Finnish tide, but couldn’t prevent Valimaki from whacking in a loose puck for a 3-1 lead just over a minute later.

The Latvians didn’t give up, but their zeal only stalled their momentum. Martins Dzierkals was penalized for going hard to the net and bowling over Vehvilainen. Tempers flared late when Latvia’s Valters Apfelbaums crushed Urho Vaakanainen with a high hit in the Finnish end.

It was a rough ending all around. Kristian Vesalainen skated off gingerly after taking a puck in the head area in front of the goal during the game-closing Finnish power play. Valimaki rounded out the scoring for Finland on a 5-on-3 with 2:34 left.

“We wanted to get two wins from these games and we got two wins,” said Valimaki. “That’s all that matters.”

The three best players of the tournament were named for each team. For Latvia, it was Mareks Mitens, Karlis Cukste, and Martins Dzierkals. For Finland, it was Veini Vehvilainen, Villi Saarijarvi, and Aapeli Rasanen.

“It’s our first year here,” said Krastenbergs. “The other teams are more confident and have better players. They’re bigger countries with bigger opportunities.”

Besides 2016, the Finns have three previous World Junior gold medals (1987, 1998, 2014). With nine players eligible to return for Buffalo, they will aspire to better things next year.