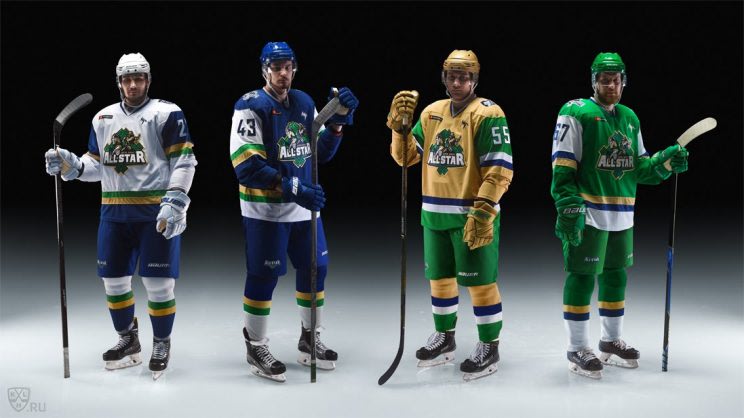 The “color rush” jersey has become a thing in the NFL, where vibrant hues pop through your HDTV screens and either make you feel like you’re watching a rainbow or looking at the aftermath of your dog eating a box of crayons.

But bold colors are a trend in sports, and the KHL is on that trend for its 2017 All-Star Game and “Week of Hockey Stars” in Ufa.

Check out these duds, designed by North American equipment giant Bauer, for the events beginning on Jan. 15.

The biggest shows of the season from all three leagues – the KHL, YHL and WHL – are all to be staged during the Week of Hockey Stars in Ufa, running from the 15th to the 22nd of January, 2017, and the elite players who take part will be kitted out in gloves, leggings and helmets sporting a unique color scheme specially created for the event by Bauer.

This special consignment for participants of the 2017 Week of Hockey Stars signals a new step in diversifying the look of Russian hockey. A refusal to adhere to the tradition of mixing only the darker hues allows the designers to experiment with new colors: lush greens, bright blues and sparkling gold. It will be the first time in Russia that the players in an event as big as the All-Star Game will be clad in gloves and pads designed to harmonize with the team jerseys.

Another result of this partnership will be an auction, devised by the Inter-Kommerts company together with the KHL and held after the close of the Week of Hockey Stars, at which many of the coveted items of equipment will be sold to the highest bidder, with the proceeds going to a very good cause – a charity providing sports equipment for a children’s sledge hockey league.

Congrats to the KHL on some sweet jerseys, even if the California Golden Seals alumni association might ask for residuals.

And congrats to Bauer on this new involvement with the KHL. Here’s hoping they were paid up front.

The KHL recently announced the 2017 All-Star Game rosters through the event’s official website. The All-Star Game will be different from previous editions. Events will be spread out starting from Jan. 15 with the MHL All-Star Game and will be held in Ufa, home of the 2013 World Junior Championships when the United States won the gold medal against Team Sweden.

The top four juniors from the MHL game will then skate in the KHL All-Star Game, which will be held on Jan. 22. Other events include the “Masters Show” (skills competition) on Jan. 21 and the first-ever Russian Women’s Hockey League All-Star game on Jan. 19.

For the KHL game, the players will be split into four divisional teams, each made up of one goalie, three defensemen, and six forwards. As mentioned, the teams will receive one player each from the MHL game.

The player with the most fan votes was Sergei Mozyakin, with more than 5,800. The most represented teams are CSKA Moscow and SKA St. Petersburg, with four players each.

It is expected that this year’s event will be as entertaining as the other ones, especially with the new format that should make the games a bit meaningful for players too.

Probably the best KHL All-Star Game was the very first one, held at the Red Square in Moscow between Team Yashin and Team Jagr, but other events were well-attended too and this year’s event promises to have great attendance as well, as the Ufa-Arena crowd is one of the most passionate in Russia.

There are a good number of NHL prospects featured in the game. The New York Islanders will have two players, as Sorokin and Golyshev made the rosters. Golyshev was called to the game thanks to the fans’ votes.

Metallurg Magnitogorsk star Mozyakin is at his ninth All-Star Game as he skated in every single All-Star event since the league was born. The only other player to do the same is Montreal Canadiens forward Alexander Radulov (although he missed the 14-15 game due to an injury), who will obviously miss this year’s even as he is now skating in the National Hockey League.

You can find more information about the events, including rosters for the MHL and Women’s League All-Star Games, on the event’s official website.