From a goon show to the big show – Vityaz reborn

For many, the big story in the Western Conference this season hasn’t revolved around the battle at the top of the table between CSKA and SKA. Instead it’s been the journey of Vityaz, perennial strugglers, into the playoff places.

Vityaz, one of the founders of the KHL, had never made it into post-season before. In recent seasons, it had got relatively close, remaining in contention until the new year before fading in the final stages. But for many hockey fans, the team’s biggest claim to fame – or notoriety – was its part in a bench-clearing brawl that forced the abandonment of a game against Avangard after setting a new record for PIMs. A cavalcade of hard-hitting players – ‘enforcers’, if you’re thinking positively; ‘goons’ if you’re less enamored of hockey fights – passed through the Moscow Region, and their antics often overshadowed the role that the club played in the development of young players such as Artemy Panarin, now a major player in the NHL and at international level.

So, what made this season a success for Vityaz?

The most change was the arrival of new head coach Valery Belov. A long-time colleague of Zinetula Bilyaletdinov at Ak Bars, there’s little in Russian hockey that Belov hasn’t seen or done – and that includes play-off hockey at Vityaz in the Superleague era. Bringing him back to a club where he has a deep connection, and giving him the freedom to work as head coach in his own right, was a key step.

Belov’s presence had a positive effect on the players he inherited, and none more so than Maxim Afinogenov. Now 37, the forward suddenly hit top form, completing the regular season with 47 (20+27) points, his best ever return since leaving the NHL and joining SKA in 2010. Remaining injury-free, and with his legendary pace seemingly undimmed by the passing years, Afinogenov’s 23-year-old team-mate Miro Aaltonen described him as “a great example for the whole team” in an interview on KHL.ru earlier in the season.

Aaltonen’s arrival was another masterstroke. No relation to the more famous Juhamatti Aaltonen, once of Metallurg Magnitogorsk and Jokerit, and best – if not most fondly remembered – for helping Finland defeat Russia in the quarter-final in Sochi, Miro arrived from Karpat and established himself as an effective center for Vityaz’s first line, scoring 44 points along the way. The club’s oft-overlooked ability to identity and nurture emerging talent delivered once again. 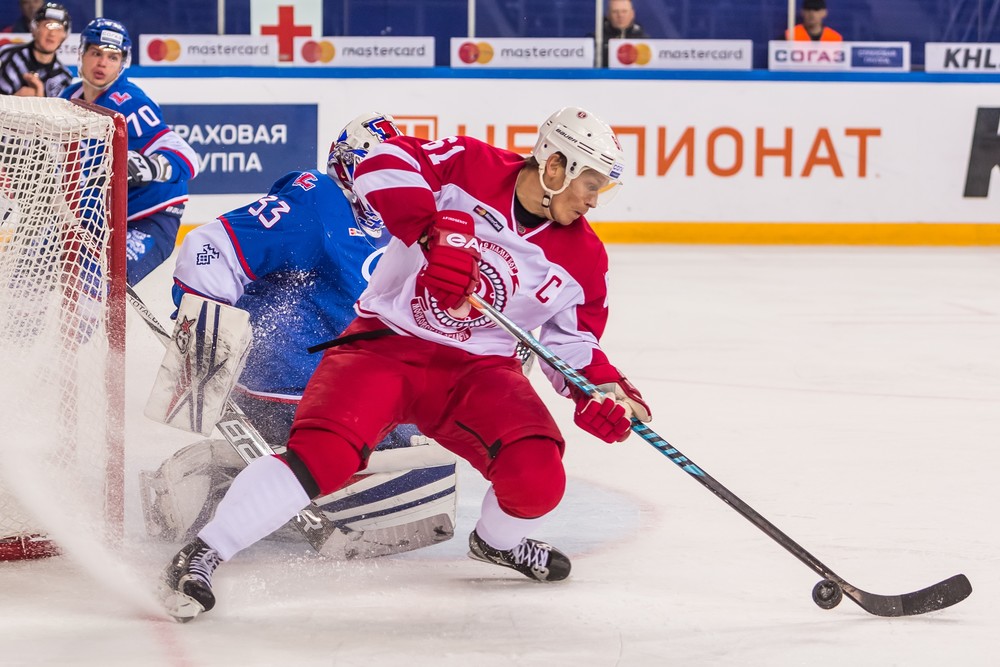 The other key summer signing was very different. Alexei Kopeikin, 33, came from Sibir, where he had captained the team as it improved steadily to become a serious contender in the Eastern Conference. Deemed surplus to requirements in Novosibirsk, he was released … and set about proving his doubters wrong by scoring 20 goals in a season for the first time in his career on his way to a 51-point haul.

Then there was the goaltending. Harri Sateri, in his second season at the club, once again showed his qualities while understudy Igor Saprykin was suddenly thrust into the spotlight as the season came to a close. An injury to Sateri handed Saprykin the starting role from January 7 until February 16, and the 25-year-old rose to the challenge impressively. Vityaz won eight of the 11 games that Sateri missed; Saprykin finished the season with numbers comparable to his colleague.

As Vityaz heads into the unchartered territory of KHL playoff action, it faces SKA as a massive outsider. But head coach Belov insists that his team can cause an upset.
“Every player needs to bring his A game,” Belov said after Saturday’s game against Admiral. “If we do that, we will win games … and more than one.”

This year’s Eastern Conference playoffs will make history – for the KHL, for our newest team and for the world’s most populous nation. Kunlun Red Star, KHL newcomer, marked its first season in action by achieving a playoff place and will bring a piece of the big show to China for the first time ever.

It’s a remarkable success for a club that, this time last year, existed as little more than a business plan. For head coach Vladimir Yurzinov, the first challenge was to assemble a competitive roster in a matter of weeks during pre-season. Then there was the difficulty of juggling a huge travel itinerary in a league where Red Star’s closest rival was Admiral Vladivostok, 1,300km distant. And, if that wasn’t enough, the team needed to build a fanbase in a country where hockey is far from the public eye: a task made even harder by the need to relocate from its Beijing base to a second arena in Shanghai for most of the fall.

We ended up with a close-knit group that wants to play and win for each other.

But the team delivered on all fronts. A multi-national roster brought together players from Russia, Finland, Sweden, North America, Slovakia and France, plus a seasoning of Chinese prospects. That was enough to secure eighth place in the Eastern Conference to set up a playoff series against defending champion Metallurg Magnitogorsk while steadily building up a fanbase in Beijing and beyond.

For Alexei Ponikarovsky, one of the most experienced men on the roster, one of the key elements in the team’s success was the atmosphere in the locker room. Despite a team being flung together from scratch, he felt that the players quickly gelled.

“Like any successful team, it’s about that combination of having some pretty good players and having a good atmosphere in the locker room,” he said. “We’re a friendly team. Even though we have players from all over the world and everyone speaks different languages, we all understand English, so we ended up with a close-knit group that wants to play and win for each other.”

Ponikarovsky, who was part of SKA’s Gagarin Cup-winning team of 2015, brought bags of KHL know-how. But it was a KHL rookie, Chad Rau, who led the scoring charts for the team with 40 (20+20) points. He credits his individual success to a strong supporting cast.

“I’ve been able to play with good players,” said the 29-year-old American forward. “There’s a lot of depth on our team and I’ve been lucky to play on a line with some good guys. The team as a whole has been strong too, and once we started winning games that helped us a lot.”

Now attention turns to post-season, and despite a daunting assignment against a powerful Metallurg team, but nobody in the club is content to merely make up the numbers in the playoffs.

Now we have a big chance to prove that we are a great hockey club, for now and for the future

Goalie Tomi Karhunen, another KHL newcomer, has enjoyed confounding pre-season expectations and is eager for more of the same.

“Before we started there weren’t many people who expected much from us, but now we have a big chance to prove that we are a great hockey club, for now and for the future,” said the 27-year-old. “It’s been good so far, but I’m hoping that our best moments are still to come.” 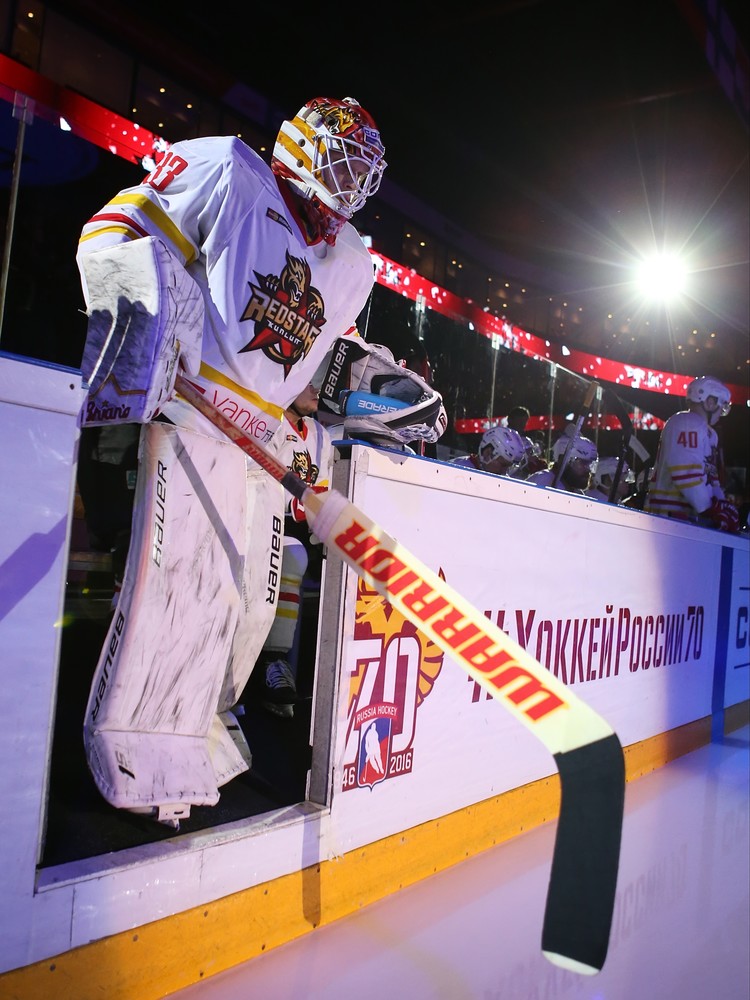 Heading into next week’s series, Kunlun faces some new problems. The team finished the regular season on a three-game losing streak and might have missed out altogether had it not been for Sibir conceding a late equalizer in its final game on Saturday. To make matters worse, French forward Damien Fleury picked up a serious injury at Dynamo Moscow and will not feature again in the current campaign. Head coach Yurzinov admitted that the end of the season – and especially the disruption caused by the international break earlier this month – was far from ideal but felt that his team had played well in the circumstances.

And despite that losing streak, he is preparing to give the defending champion a run for its money. “We have to be ready to face a tough opponent,” he said after Saturday’s 1-2 loss at Dynamo. “But I think we have everything in place to put up a real fight against Magnitogorsk.”

By Michael Pavitt – Inside the Games

Iran’s ice hockey team have been disqualified from the 2017 Asian Winter Games competition here but will still be allowed to play unofficial matches.

The country were scheduled to feature in the third division of the tournament, which has been spilt into two pools.

But insidethegames has been told a number of Iranian players were deemed ineligible to compete in the competition by the Olympic Council of Asia (OCA).

The players concerned were suspended from competing in the event, with the issue believed to have centred around those concerned having not lived in Iran for three years, despite having some heritage to the country.

There were also claims some players may have represented other nations, rending them unable to compete for Iran.

A match between Iran and Macau did go ahead yesterday, the latter emerging 7-1 winners,

The win, though, has not counted towards the group standings.

The OCA have confirmed Iran’s matches at the Games are still going ahead, but they will effectively be treated as friendlies, with the results not included in the official results of the Games.

Our suspended players are not allowed to go to the locker room and either practicing with us!HOW RIDICILOUS! @StevenEllisNHL @NTofIceHockey

“On February 18, the Organising Committee of the Winter Asian Games announced that Iran’s non-participation in ice hockey men was decided,” organisers announced.

“Thirteen out of 22 athletes did not meet eligibility for participation such as nationality determined by the OCA.

“The Macao game that was planned on the same day was held as an exchange game, but it will be Macau’s victory.”

Shahryar Sean Amini, one of Iran’s player, reacted to the disqualification on social media, claiming he found the situation “ridiculous”.

“Our suspended players are not allowed to go to the locker room and either practicing with us,” he posted.

A member of Thailand’s delegation for the Games is also believed to have been declared ineligible to participate.

In the ice hockey competition, Kyrgyzstan, Qatar, Bahrain, Philippines and an Independent Olympic Athletes team representing Kuwait, who remain suspended by the International Olympic Committee, are in the first pool.

Malaysia, Macau, Turkmenistan, Indonesia and Iran were set to compete in the second.

Japan outlasted South Korea 3-0 to remain unbeaten in the women’s ice hockey at the Asian Winter Games on Monday.

Hanae Kubo opened the scoring for Pyeongchang-bound Smile Japan on a slip up by South Korean goalie Shin So-jung in the second minute. Naho Terashima’s short-handed goal early in the final period gave the hosts some breathing room, and Shoko Ono put the game on ice with seven minutes remaining.

The win moved Japan to 2-0 in the tournament.

With South Korea keeping up with Japan through two periods, the game was played at high speed, with both teams contesting each puck and exploiting their opponents’ mistakes.

The scoring started early when Shin failed to control a puck behind the net, and it rebounded to Kubo, who fired home before Shin could close the door.

Although the South Koreans were never really outskated, the Japanese passing meant they had the bulk of attacking zone possession.

But a bad shooting day by Japan and a string of great saves by Shin kept the game in doubt until the third period of a solid, electrifying game.