For naturalized Dalton, the puck stops in South Korea

Growing up in rural southern Ontario, Matt Dalton never figured that his career path in professional hockey would take him to South Korea.

Dalton, along with a handful of other North American players, has acquired South Korean citizenship and is a key member of the men’s national ice hockey team as it prepares to take on the world’s best as host of the 2018 Winter Olympics.

“The possibility of getting citizenship intrigued me,” said the 30-year-old goaltender who is in Sapporo representing South Korea at the Asian Winter Games.

“Also, the job stability,” added Dalton, who played briefly in the Boston Bruins organization. “When you are playing overseas it’s kinda one year at a time. You can get bounced around pretty quick.”

Dalton was playing in Russia in the KHL before getting invited to play for South Korean team Anyang Halla in the Asia Ice Hockey League. The paycheck took him to South Korea. The lure of the Olympics is keeping him there.

The South Korean team has never qualified for the Olympics and is hoping to avoid an embarrassing drubbing on international ice hockey’s biggest stage.

The Korean Olympic Committee asked the justice ministry to fast-track the naturalization of the import players and they were approved in accordance with a revised immigration law that allows qualified foreign nationals to hold multiple citizenships.

Dalton said being able to maintain his Canadian citizenship made the decision a lot easier.

In the 12-nation men’s tournament in Pyeongchang, South Korea has been placed in Group A with top-ranked Canada, the Czech Republic and Switzerland, ranked sixth and seventh respectively.

With or without NHL players – the league is still undecided on whether it will take part – that’s a tough group for the hosts.

“Hockey-wise, we are in pretty deep with the competition,” Dalton said. “There are big challenges no doubt. But we are working hard and trying to get better so, hopefully, we can have a good showing for South Korea.”

Paek, the first Korean-born hockey player to play in the NHL, won two Stanley Cups with the Pittsburgh Penguins in 1991 and 1992.

His team, 23rd in the International Ice Hockey Federation’s rankings, lost their opening game of the Asian Winter Games 4-0 on Wednesday to Kazakhstan, which is No. 16 in the world rankings.

“They are a good team,” Paek said of the Kazakhs. “We had some good chances but we couldn’t capitalize.”

Paek said getting in games against high-level competition is one of the toughest things about preparing his Olympic squad.

“The lack of game experience at a high-level is our biggest challenge,” Paek said. “In order for us to compete with top-nation teams we need to play them. Hockey is a small world where they have their small group of friends and it’s tough to get in and play any games. So we have to do the best we can and move forward.”

South Korea has three clubs in the Asian League Ice Hockey, the only professional league in the region. Those clubs provide most of the national team’s roster.

While some would argue the import players are merely hired guns, Paek had a different take.

“Adding the import players has really helped grow and develop our (Korean) players,” Paek said. “I count on the kids that have been developed in Korea a great deal now.”

For now, Dalton and his fellow transplanted teammates will continue to work on their game and adjust to a new culture.

Having Paek as the coach has made the transition much easier.

“The cultures are so different that things don’t always mesh” Dalton said. “So it’s nice to have that buffer there and know he’s got your back.”

Division I All But Decided

Thanks to a 3-2 overtime victory over the pre-tournament favourites from Chinese Taipei, Thailand just need to tackle Singapore on Saturday to secure the tournament title for Division I at the Asian Winter Games.

Chinese Taipei took the early lead thanks to a goal seven minutes in by To Weng, a lead that would stand for almost the entire game. When teammate Chang-Hsing Yang made it 2-0 with 11 minutes left in the contest, it really looked like Taipei was in a great position to take the tournament lead heading into the final game later in the week.

But Swedish-born and trained defenseman Ken Kindborn was the man of the hour for Thailand, scoring the first goal and the eventual deciding marker before a minute was even complete in the extra frame. Kindborn is second in team scoring and fourth overall with eight points, and with one game to go, he’s been a major player for the team currently in the catbird seat.

Thailand just needs to beat Singapore on Saturday to grab the gold medal, which shouldn’t be a tough task. After four games, Singapore has scored just four goals and have allowed 42 to sit last place in Division I.

The battle for third also played a big role on Thursday, with the United Arab Emirates (11-2 over Singapore) and Mongolia (8-6 versus Hong Kong) both taking victories. The wins put them tied for third place with six points each, but the Emirates hold the tiebreaker, if needed, thanks to a 6-3 victory earlier in the tournament.

Mongolia will be in tough on Saturday, having to face Chinese Taipei, who of course still have a chance to win the gold medal. The Emirates will have it easier due to Hong Kong’s weaker place in the standings, but a win could boost them up to second if Mongolia loses as well.

A massive 14-2 victory over Qatar helped make hockey history as the Philippines managed to secure their first official victory.

Lenard Lancero posted three goals in the victory, with all three of the markers coming in the third period. Paul Sanchez was red hot as well, putting up seven points, including two goals as the biggest performer for Philippines. Adbdulla Mohammed scored both goals for Qatar.

The other game on Thursday saw Macau take down Indonesia 6-2 in what was Indonesia’s best game of the two they’ve played. Kim Hei Mok led the way with three points for Macau, while Ka Yu Jonay Leung scored twice for his nation. Indonesia’s goals came from Roy Nugraha and Ronald Chandra.

Japan hammered Thailand 37-0 to make it four wins out of four in the women’s ice hockey competition at the Asian Winter Games on Thursday,  Japan has scored a total of 92 Goals in the 4 games.

Japan, which recently qualified for next year’s Pyeongchang Olympics, faces China for the gold medal in its final match on Saturday.

No. 1 goalie, top forward come through in shootout victory for Korea

South Korean women’s hockey goalie Shin So-jung was so nervous during the shootout against China at the Asian Winter Games Thursday that she couldn’t stand to watch her teammates take shots.

Instead, she tried to stay focused on the puck fired by the Chinese shooters, trying to make one save at a time.

And the approach worked just fine, as South Korea’s 10th shooter, Park Jong-ah, scored the winner past Wang Yuqing for the 3-2 victory at Tsukisamu Gymnasium. It was South Korea’s first win over China in eight meetings, and the first seven losses had been by the combined score of 90-2.

Though Park scored the winner, Shin was easily South Korea’s best player. She made 27 saves in three periods of regulation play and a five-minute overtime period. After the second Chinese shooter, Kong Minghui, scored in the shootout, Shin went on to deny the next eight shooters.

“I think I’ve been in a shootout at every international competition, and I can’t really watch my teammates take shots,” Shin said. “It would affect my own play. So I turn my back on them and try to keep my focus on each and every shot on my end.” 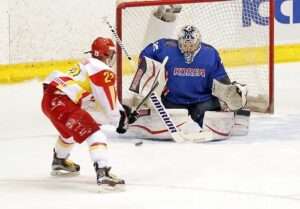 Shin, who enjoyed a stellar collegiate career in Canada and signed with the New York Riveters in the National Women’s Hockey League, has been through lean years for South Korea. And she’s that much more appreciative of the progress the team has made.

Prior to the Sapporo event, South Korea had lost all 15 games at the Asian Winter Games by a cumulative score of 242-4. Here, South Korea beat Thailand 20-0, battled Japan before losing 3-0, and then fell to Kazakhstan 1-0. The win Thursday marked the first time South Korea scored more than one goal against China.

“We’ve really come a long way and grown so much,” she said. “We’d lost to China so badly before, and we were determined to prove ourselves against them.”

Shin said recovering from the losses to Japan and Kazakhstan, which came on consecutive days, was particularly hard. Shin said the players had given so much to play against Japan, the prohibitive tournament favorite, that they had nothing left in their tank against Kazakhstan.

“We just didn’t play our game against Kazakhstan,” she said. “But we regrouped trying to show our potential before the Olympics (in South Korea’s PyeongChang next year). We kept telling ourselves we were great players no matter what people say, and that we wanted to play our hearts out.”

South Korea had to beat China by three goals for a shot at a medal, but Park Jong-ah, who also scored in regulation, said the players still managed to find motivation in overtime and then shootout. 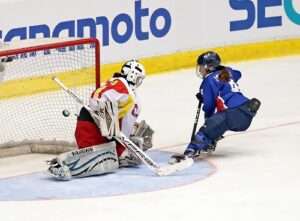 “We were down on ourselves after losing to Kazakhstan because we felt we could’ve won that game,” she said. “And we told each other we had to beat China to gain something from this competition. And rather than worry so much about strategies, we wanted to enjoy ourselves.”

As for the victory, Park said, “I can’t describe it. We could’ve won the game earlier, and we made it hard on ourselves. It’s an incredible feeling.”