Reasons that you (yes, YOU!) should consider cheering for Team USA. In no particular order:

Team USA won the gold medal last year, so while I wouldn’t say they’re “favored” any more than in any other US-Canada matchup, they’ve got a tremendously strong roster. Two of the new additions to the roster are to replace recently retired players, with University of Minnesota-Duluth standout Maddie Rooney taking the third goaltending slot with Brianne McLaughlin’s departure, and Boston College blueliner Kali Flanagan filling the space on defense left open by the retirement of Anne Schleper.

The other four players not on last year’s roster are Amanda Kessel, Kessel’s University of Minnesota linemate Hannah Brandt, Gigi Marvin (who I apparently hallucinated being on the final roster last year), and Kelly Pannek. Pannek, who tied for the women’s NCAA lead in scoring this season as a junior, is making her debut for the USA senior team.

They also have a new coach in Robb Stauber, whose first outing as coach of Team USA involved…watching his team get swept in the two-game December Series against Canada three months ago. Hopefully, he’s learned some things? Maybe?

Get ready! The #2017WWC starts Friday & we’ll be bringing you @usahockey v @HockeyCanada at 7:30pE. Watch this rivalry unfold with us! pic.twitter.com/2oeoBcoTjn

“Unfold” is an interesting way to refer to a decades-long rivalry that frequently ends with punches thrown, but the point is, this is going to be some sweet red-white-and-blue hockey. Wednesday’s decision was a huge win for the USWNT off the ice. Now, it’s time to see if they can win big on it. 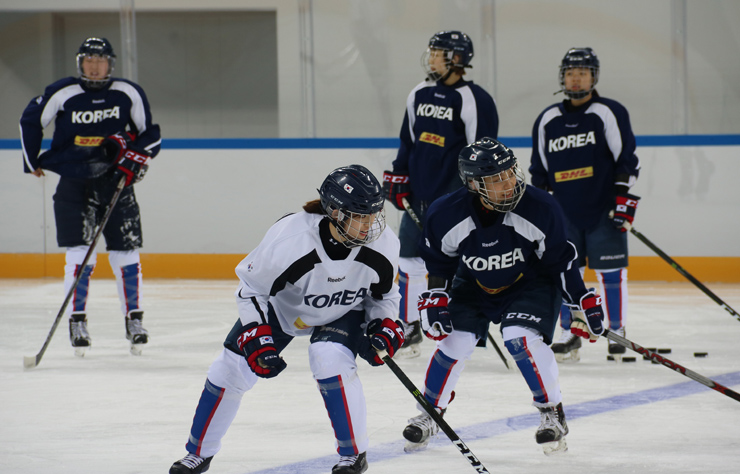 By Kang Hyun-kyung – The Korea Times

Sarah Murray, head coach of the women’s national ice hockey team, habitually tapped her stick on the ice while watching her 22 players running drills at the Kwandong Hockey Center, Wednesday, a week before their showdown with North Korea.

Tapping sticks on the ice is what coaches and hockey players would traditionally do when they are excited about their teammates for their fantastic play or show their support for them. The Canadian coach does that whenever her players score a goal or make a good save.

The intense, fast-paced morning drill, which lasted an hour and a half, neared the end with the sudden stoppage of the loud sound of the puck hitting the boards linking the rink.

Murray asked the exhausted players to gather around for a team meeting and delivered a message to help the players prepare for the forthcoming 2017 International Ice Hockey Federation (IIHF) Championship Division II Group A.

During the seven-day competition starting on Sunday in the eastern city of Gangneung, six national teams — the two Koreas, the Netherlands, Britain, Slovenia and Australia — will play against each other for the top post. The two Koreas are set to clash on April 6 in Gangneung Hockey Center.

“We’re kind of a little bit loose, not taking the drill seriously,” she said. Her remarks were instantly translated by Jo Susie, a national team player, for her teammates.

Murray advised them to work out just as they would play in a real game.

This year’s IIHF women’s championship has drawn keen attention from the public, partly because of the rare coincidence of the two Koreas’ showdown on the ice and in real politics. Inter-Korean relations couldn’t be worse as North Korea creates a dire security situation on the peninsula.

The totalitarian state turned a deaf ear to international condemnations on its series of provocations and continued to test fire its missiles. North Korea is also rumored to conduct another nuclear test sooner or later.

The two Korea’s faced off last year in Bled, Slovenia, during the 2016 IIHF championship Division II. South Korea defeated the North 4-1 for the first time since the national team was created in 1998.

Last year was a milestone in South Korean women’s hockey also because the national team crushed Britain, which was unprecedented, and became a runner-up there, the best results the team had ever achieved.

Murray said the players are not content with last year’s victory, stressing North Korea is a tough team to play.

“I think our team has a lot more skill than the North Koreans,” she said. “But they are the team that never give up and do anything to help their team win. They block shots with their faces or any part of their body and they get hit with the puck and you can tell they are in pain but they keep playing.”

The national team players were resolute and said the game against the North is one they must win.

“We’ve played against them many times before and we know them very well,” said Park Jong-ah, a national team member. “North Korea is not the team that scares us, but it is the team that we should have a watchful eye on.”

Park was optimistic about the April 6 showdown. “I think we’re going to win,” she said.

“There was a time when North Korea defeated us 6-0,” recalled Han Soo-jin, who joined the national team in 2007. “They could have scored a lot more but they didn’t go aggressive because those North Koreans knew they were going to win anyway and didn’t want to put us in trouble.”

If her team was routed by the North Koreans, Han indicated she and her teammates would have been troubled at home. “So they tried to kind of help us save our face,” she chuckled.

Her remarks showed the tough early years the women’s national team had gone through since it was created. South Korea was crushed by China 1-30 during the 2003 Aomori Winter Asian Games. Little progress had been made in the regional sporting event held four years later.

Such results were not surprising for those familiar with how the team was created in the late 1990s. There had been no women’s ice hockey team in this country when the national team was created in 1998, a year before the Winter Asian Games in Gangwon Province.

The national team project became a quick fix. Players from other winter sports, such as figure skaters and short-track speed skaters, were invited to the national team as founding members. A North Korean-born hockey player also joined the games.

“We were not professional at that time,” team captain Lee Kyou-sun said. “We had no opportunities to upgrade our skills because there was and still is no other women’s hockey team here. There was no systematic support in place at that time, either. Funding was stingy. We also had no opportunities to train overseas or play against foreign players.”

Lee, who joined the national team in 2000, said head coach Murray was a game changer.

“We now have a foreign head coach who was trained in North America. Since she joined the national team, we came to have lots of opportunities to play against North American players through our regular training in Minnesota,” Lee said. “Generous funding from the Korea Ice Hockey Association also helped us upgrade our skills because it allowed us to have such overseas training opportunities in North America.”

The women’s hockey team has drawn much attention since last year when the sport movie “Take Off 2” was released during the summer.

The film depicts the founding members of the women’s hockey team, their hardships and heartwarming stories.

Although the movie failed to make a box-office hit, attracting less than 1 million film lovers, it created a media frenzy for the national team and the early hockey players who worked two or three jobs to finance their hockey careers.

Team Canada lost to the US in the final for the third consecutive time in 2016. Now they’re back with their usual stacked team, a few rookies… and Shannon Szabados.

This is Szabados’ first season of international play since Sochi. In the two-game December series against Team USA she played a total of 111 minutes (starter Ann-Renée Desbiens went down with an injury only eight minutes into game one) and stopped 55 of the 60 shots she faced for a save percentage of 0.917 and GAA of 2.69. More importantly? Team Canada swept that series.

Seventeen of the 23 players played in the CWHL this season including co-leading scorer, league MVP and player-voted MVP Marie-Philip Poulin. (It’s possible you may have heard of her). The four rookies — Toronto Furies’ Erin Ambrose and Renata Fast, Brampton Thunder’s Laura Stacey and University of Minnesota’s Sarah Potomak — each have their own features on the Hockey Canada site.

There are lots of questions to ask with this team: who’s starting the tournament, Szabados or last year’s surprise star Emerance Maschmeyer? Are rookie d-pair Ambrose and Fast going to be trusted together or split up? How is Caroline Ouellette going to fare in her first tournament as assistant coach? Is a Canada vs USA medal game ever going to get decided in regulation again?