The United States won their fourth straight women’s world hockey championship with a 3-2 overtime win over Canada on Friday.

Hilary Knight scored the winner at 10:17 of the extra period in front of a sellout crowd of 3,500 at USA Hockey Arena.

“It hurts. There’s no doubt about that,” said Canada coach Laura Schuler.

“You never want to hear another person’s anthem.”

Kacey Bellamy scored twice for the Americans and goaltender Nicole Hensley made 28 saves in the win.

Canada and the U.S. have clashed for gold in all 18 women’s world championships dating back to Ottawa in 1990.

The U.S. has now won seven of the last eight gold medals, while Canada hasn’t finished first since 2012.

The American women have also run the table of titles this Olympic quadrennial since falling 3-2 in overtime to Canada in the gold-medal game of the 2014 Olympics.

Meghan Agosta and Brianne Jenner replied for Canada. Shannon Szabados made 37 saves in her first international women’s hockey final since the 2014 Olympics.

Canada scored once on five power-play chances, while the U.S. went 0-for-5.

The U.S. outshot Canada 15-6 in the third period. A series of Szabados saves during an American power play late in regulation sent the final to overtime for the fourth time in the last six world championships.

“The biggest thing to take out of this is to get more shots on net and more quality shots,” said Agosta.

“It’s really tough but we need to bounce back and focus on the things we’re not so good at it so that next time we’re in this situation we’re ready to do whatever it takes.”

After a scoreless second period, Jenner scored a power-play goal to tie it 2-2 at 9:44 of the third. The goal was initially waived off, but awarded after video review.

Hensley slid her pad back into the net while making the save and the puck crossed the goal line.

Bellamy scored put the U.S. up 2-1 just 42 seconds into the third off Knight’s between-the-legs, backhand pass.

Bellamy scored her first on a slapshot from the blue line through traffic at 4:34 of the first period.

Jennifer Wakefield gathered up a U.S. centring pass in front of Szabados and skated the puck back on an odd-man rush with Agosta, who beat Hensley stick side 61 seconds after the opening faceoff.

So why has Canada won four straight Olympic gold medals, but can’t beat the U.S. for world championship gold?

When it comes to the Olympics, the Canadians have the advantage in preparation as they play about 30 games against midget triple-A boys during their six months of preparation.

They’re more battled-hardened and their execution of systems is superior.

But when both teams have just a few days of training camp prior to the world championship, the U.S. women’s individual talent and speed take over.

Those edges are slight, however. Five of the last six world championship finals have been decided by one goal.

The American women were an empowered group upon their delayed arrival in Plymouth.

Tired of negotiations they said were going nowhere, the host team threatened to boycott the tournament if USA Hockey didn’t increase their financial support more in line with what the men get.

They carried their point in the showdown with their federation. Over 100 women inside and outside the national team pool joined the movement and refused USA Hockey’s invitation to be replacement players.

According to The Associated Press, their compensation during the six months they’re together training full time for the Olympics tripled to roughly $3,000 per month.

They got the same insurance protection and business class travel the men get to the world championship.

The U.S. didn’t get a full training camp because of the dispute, but that didn’t hamper them.

“The negotiation process took a toll and our camp was shorter, but knew it was going to be a bond that was unbreakable,” said Knight.

Finland won bronze Friday with an 8-0 win over Germany. Fourth is the best result ever for that country.

The Finns are now playing a system capable of beating Canada and the U.S.

The question is whether they can maintain their gains on the North Americans next winter when Canada and the U.S. take big strides forward as full-time teams.

“We have to find a medicine for that. Our medicine probably will be that those aspiring for a spot on the roster have to practise with boys during the season. Now it’s time for the Finnish male hockey to show they really want to support us . . . offer a spot for every member of the women’s team to practise with boys’ teams.”

Russia placed fifth and Sweden sixth. Switzerland downed the Czech Republic 3-1 to win the relegation round, but the Czechs may not be relegated to the second-tier world championships.

Women’s world championships are not held in Olympic years. Increasing from eight to 10 countries in 2019 will be put to a vote at the International Ice Hockey Federation congress in May. 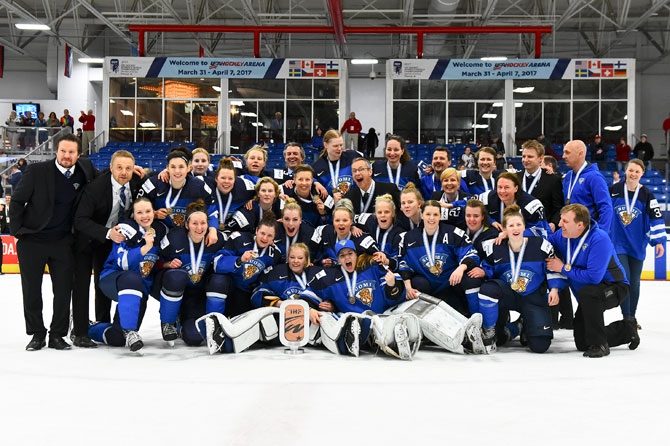 Finland scored early, pressured the Germans throughout, and skated to an impressive 8-0 win over Germany in the bronze-medal game of the Women’s Worlds.

The win caps an excellent tournament for Suomi which earlier defeated Canada for the first time and later railled from a 3-1 deficit against the United States before losing, 5-3.

For the Germans, the 4th-place finish is their best ever at this event, all the more impressive given that they were in Division I last year.

“We started pretty well in the tournament, but as you can see on the ice against Canada, the United States, and Finland, the gap is big,” acknowledged Germany’s coach Benjamin Hinterstocker. “We don’t have to talk about which team is the better one, but overall, we should be happy for the team and women’s hockey in Germany. I think we represented German women’s hockey well.”

Such was the joy the Germans felt for their efforts here in Plymouth that after the game they took a team photo on ice, not a common practise after a lop-sided medal loss.

Noora Raty earned the shutout for the Finns today, stopping just 11 shots. The Finns put 38 shots on the German goal.

Captain Jenni Hiirikoski had a goal and two assists for the Finns while Petra Nieminen had two goals to lead the balanced attack.

“I think this was a big step forward,” Hiirikoski said, “especally looking to next season and the Olympics. We’re going to be playing and practising with boys next year, and that will help us get to the next level.”

“It’s a good ending,” said Raty. “I think we made a good statement here that we might have separated from the rest of the Europeans and actually have a real chance of playing in the finals one day.”

Today, though, Finland was too much. It scored just 53 seconds after the opening faceoff. Hiirikoski hit Linda Valimaki with a great outlet pass, and Valimaki skated around the German goal and tried a wraparound. Jennifer Harss was there to block the shot, but Petra Nieminen pushed home the rebound.

The Finns had the better of the puck all period and scored two late goals to put the game out of reach for the low-scoring Germans. Ronja Savalainen got one at 16:17 on a scramble, and 73 seconds later Venla Hovi also banged in a shot from close range after some fine digging behind the net from Valimaki.

Hinterstocker opted to give Ivonne Schroder some time in goal, so she started the second. Unfortunately, the Finns were firing on all cylinders and put five pucks behind her.

Hiirikoski started the onslaught with a slapshot from the point on a power play. She then got an assist on the next goal, by Noora Tulus, when Tulus knocked in the rebound off a high shot from Hiirikoski. By the end of the second, it was 32-6 in shots for Finland, and the Germans were simply trying to gain some experience from their second straight bad loss.

“We just wanted to play for each other,” Hiirikoski said. “We wanted to have fun and focus on winning.”

The Czechs, though, might not be relegated as the IIHF is considering expanding the top pool of the Women’s Worlds to ten teams. A decision will be made during Congress in May in Cologne during the men’s World Championship.

“We can’t be very happy with seventh place,” Muller said after. “We wanted to reach the quarters. All three games against the Czechs were tough, but I think we showed we are a good team.”

“I’m happy with the way we played in the end,” said goalie Florence Schelling, who was excellent in stopping 18 of 19 shots today. “Being down 1-0 in a series isn’t fun, but we battled back. I’m proud to be part of this team.”

You knew Muller was going to have a good game from early on. On her second shift she sprung linemate Lara Stalder clear for a break, but Stalder couldn’t beat Blanka Skodova. No matter. A few minutes later Muller was doing her thing again.

This time she chased down a loose puck along the right wing and fired a perfect saucer pass to Dominque Ruegg, hustling to the goal. Ruegg got her stick on the pass and tipped it off the post and in at 7:01. It was just the kind of start the Swiss needed.

Two and a half minutes later, Muller scored one of the nicest goals of this championships. Skating up the middle alone, her teammates on a line change, she put on a burst of speed as she crossed the Czech blue line, split the defence, and roofed a great shot over Skodova.

“I saw a hole between the defence and I had good speed,” she said. “I was able to put the puck between them and managed to lift the puck up over the goalie as I fell.”

The Czechs didn’t register their first shot on goal until 11:28, but they made it count. Aneta Ledlova lost the puck on a rush, but Tereza Vanisova followed the play and got the loose puck. She then drilled a great shot past the outstretched glove of Schelling to cut the lead in half.

The Czechs dominated the second and were unlucky not to tie the score. They had several great chances and only some nice goaltending from Schelling–and lack of touch around the net by the Czechs–prevented the game from being tied. After two periods, though, the Swiss still clung to a 2-1 lead.

Early in the third, the Swiss got that precious insurance goal, on a power play. Muller fed a pass to Stalder at the point, and her hard blast went all the way.

And now the Swiss prepare for PyeongChang. After a surprising bronze in Sochi, more might be expected of them, but women’s hockey is changing fast. “Going into Sochi was different,” Schelling noted. “We were in the top group, so we didn’t have to win a game to make the quarter finals. And at that point, it’s 50-50. But this time, we’re in the lower group, so we have to qualify for the quarters next year. And although we’ve improved so much, so has all of women’s hockey. You can see that in every game.”