Day Fourteen At The Worlds 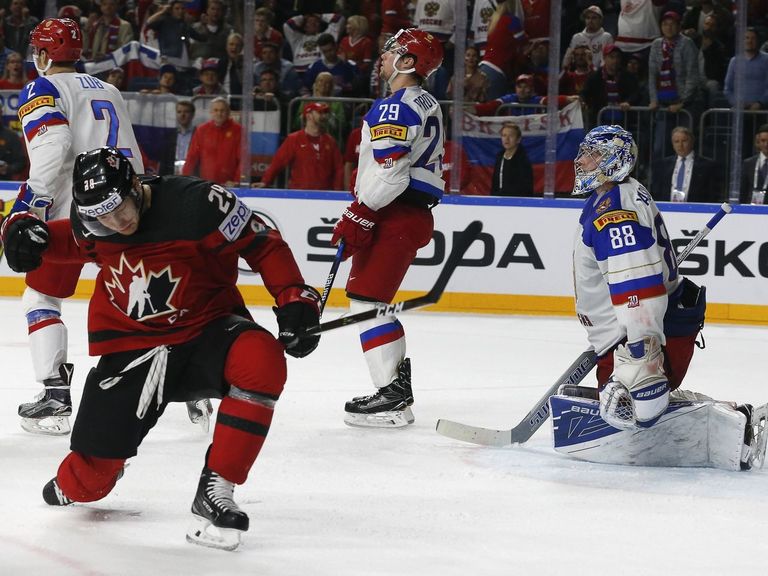 
Canada completes comeback to eliminate Russia, will play for gold

It’s not over until it’s over.

Team Canada put together a four-goal effort in the third period for a 4-2 comeback victory over Team Russia in semifinal action Saturday.

The two sides were scoreless through the first 20 minutes, but goals by Evgeny Kuznetsov and Nikita Gusev helped Russia take a 2-0 lead into the final frame.

Vadim Shipachyov, who recently signed with the Vegas Golden Knights, drew an assist on Gusev’s goal, marking his 13th point of the tournament.

Canada got on the board just 17 seconds into the third with a goal from Winnipeg Jets center Mark Scheifele, who tipped a shot by Russian netminder Andrei Vasilevskiy.

Colorado Avalanche forward Nathan MacKinnon drew an assist on Scheifele’s goal, then added a tally of his own from the slot with less than five minutes remaining in the third to bring the score to 2-2.

Buffalo Sabres center Ryan O’Reilly completed the comeback just 1:51 later, registering his fifth goal of the tournament to put Canada ahead. The team would tally again, with Sean Couturier adding an empty-net goal.

Canada will advance to the gold medal game to face the winner of Saturday’s match between Finland and Sweden.

The country has won gold the past two years, defeating Russia in 2015 and Finland in 2016.

By Sean O’Leary – The Score

Sweden defeated rival Finland 4-1 on Saturday to advance to the gold medal game of the 2017 IIHF World Championship. The Swedes will battle Team Canada for international supremacy.

Just 1:49 into the first period, Nicklas Backstrom‘s faceoff win was one-timed by defenseman Alex Edler past goaltender Harri Sateri to give Sweden an early lead.

Three minutes later, Joonas Kemppainen pounced on a loose puck and pushed it by Henrik Lundqvist to tie things at 1-1, but that’s as close as Finland, who will take on Russia in the bronze medal match Sunday, would get.

Sweden’s power play took over in the middle frame, with goals from John Klingberg and William Nylander, who leads the tournament with seven tallies in nine games and is tied for second with 14 points.

Joakim Nordstrom added a fourth goal late in the third period, which was a suffocating 20 minutes from Sweden’s talented blue-liners, as the final shot count finished 41-23 in favor of Tre Kronor.

Sweden hasn’t played for gold since 2013, when they defeated Switzerland on home soil. The Swedes and Canadians last met in the final in 2004, with Canada winning the title.