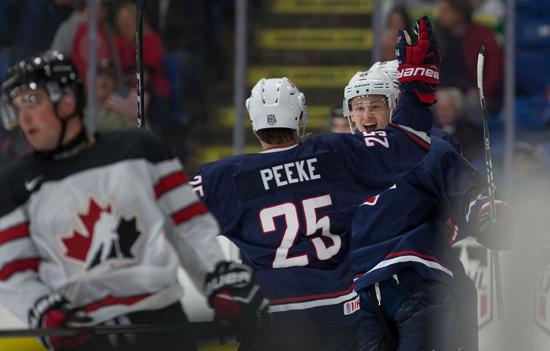 Anderson opened the scoring for the U.S. just 5:33 into the contest. The play started when Fox collected the puck at the blue line and sent a cross-ice pass to Patrick Harper (Jericho, N.Y.) who curled towards the slot and fired a pass that Anderson redirected past Canada’s goaltender Carter Hart.

Jordan Kyrou evened the score at the 12:43 mark by firing a slap shot from the top of the left circle past Joseph Woll (St. Louis, Mo.).

Less than four minutes later, Givani Smith gave Canada a 2-1 advantage when his shot from the blue line deflected off a skate and floated over Woll into the top right corner.

The U.S. were able to respond just 43 seconds later, though, when Fox took a pass from Casey Mittelstadt (Eden Prairie, Minn.) and tucked a wrist shot over Hart’s right shoulder to knot the score, 2-2.

Anderson regained the U.S. lead 1:23 into the middle stanza with his second power-play goal of the game by batting home a rebound off an initial shot from Ryan Poehling (Lakeville, Minn.).

At 9:14, Kailer Yamamoto (Spokane, Wash.) made it 4-2 by taking a pass from Fox and skating around a Canadian defender before tucking a backhanded effort low blocker side.

Pierre-Luc Dubois cut the U.S. lead to one just 3:31 later by finding a loose puck near the crease and lifting it over Woll’s left pad.

Harper regained a two-goal U.S. lead just 48 seconds into the final frame when he took a pass from Fox, split two Canadian defenders and fired a wrist shot high glove side past Canada’s goaltender Dylan Wells.

Poehling finished a feed from Harper on the power-play 6:42 into the final period before Sam Steel one-timed a shot past Woll just over five minutes later to make it 6-4.

Jonah Gadjovich tallied for Canada less than two minutes later to bring the score to 6-5.

Anderson completed the hat trick with an empty-net goal in the final minute to account for the 7-5 final.

Woll stopped 16 shots to earn the victory for the U.S.


Sweden defenseman Rasmus Dahlin only played twice and fought a fever that sidelined him for three games, but left the World Junior Summer Showcase in a positive mood.

“It was so much fun,” he said. “I haven’t played so many games but the games I played went well and I think it’s been a good week.”

Dahlin finally got back on the ice against Finland at USA Hockey Arena on Saturday and had four shots on goal in a 6-5 overtime win.

Dahlin, expected to be one of the top picks of the 2018 NHL Draft, didn’t need to do much to show he deserves a spot on Sweden’s roster for the 2018 IIHF World Junior Championship. But in two games at the Summer Showcase he displayed his superior skating, poise and decision making.

He had an assist in a 4-3 win against USA Blue on Saturday. He also made a game-saving dive into the goal to block a shot.

“For us, he’s a two-way defenseman,” Sweden coach Tomas Monten said. “He’s always going to be recognized for his puck movement and his skating. He made some nice plays on the blue line as well. We feel that in Rasmus we have a player that can play both ends of the ice. He’s going to play on our penalty kill. He’s great at the man-on-man play down low. I think he could be a complete defenseman.”

Dahlin, who turned 17 on April 13, made his Swedish Hockey League debut last season with Frolunda and had three points (one goal, two assists) in 26 regular-season games, and five points (three goals, two assists) in 14 playoff games.

He also had two points (one goal, one assist) for Sweden as its youngest player at the 2017 WJC, and it’s expected that he’ll have a bigger role at the 2018 tournament.

“He showed us last year it’s not an age factor,” Monten said. “We’re going to go with the best players, doesn’t matter if they’re young or old. We’re just looking for the players that can make our team better. For sure he’s one of them.”

NHL scouts were impressed and will keep a close eye on him this season.

“I watched him play in the World Juniors and watched him play a couple [SHL] games in the playoffs,” a scout from an Eastern Conference team said. “He played a lot of minutes with the men … and I was really impressed with his poise and his composure. He skated well and moved the puck and had skill. The composure that he showed as a 16-year-old against men in the top league was phenomenal.”

Now Dahlin’s goal is to have a larger role with Frolunda and help Sweden at the 2018 WJC improve from its fourth-place finish in 2017. And do it while the draft year spotlight is focused on him.

But he said he’s not worried about the extra attention. His focus is spending time in the gym to get stronger, and working on all areas of his game on the ice, especially his shot. 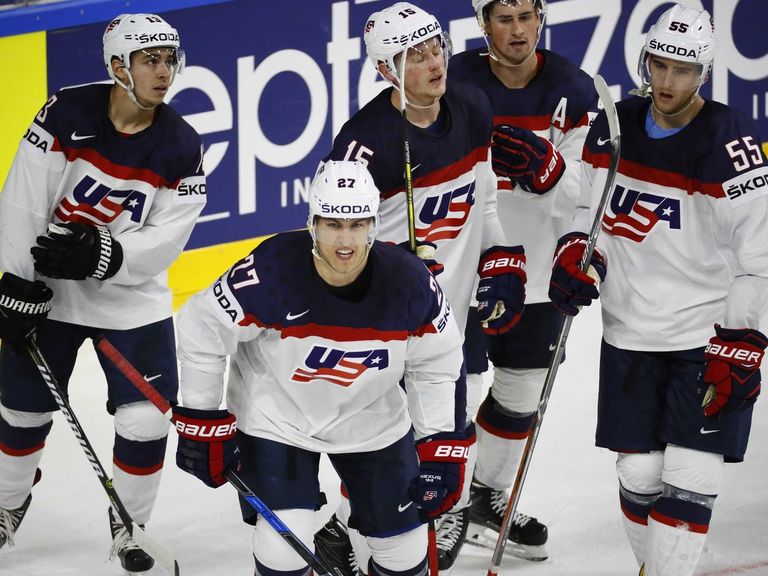 SA Hockey won’t use its failed past blueprints to construct a 2018 Winter Olympics roster.

Team USA, which named Jim Johannson as general manager and the University of Wisconsin’s Tony Granato as coach of its Olympic entry Friday, will have a different look when it arrives in Pyeongchang.“We want a skilled team,” Johannson told Ryan Kennedy of The Hockey News. “The game is all about skating today. We’re gonna get up and down the ice.”

Given USA Hockey’s lagging international results – including a disastrous run at last year’s World Cup, in which a hard-nosed club constructed by former Los Angeles Kings GM Dean Lombardi finished an embarrassing seventh – a change in philosophy seemed to be in order.

Johannson is a longtime member of USA Hockey who currently serves as assistant executive director of hockey operations, one of many titles he has held since 2000. The Minnesota native was the GM behind Team USA’s three gold-medal finishes at the world juniors in 2010, 2013, and 2017.