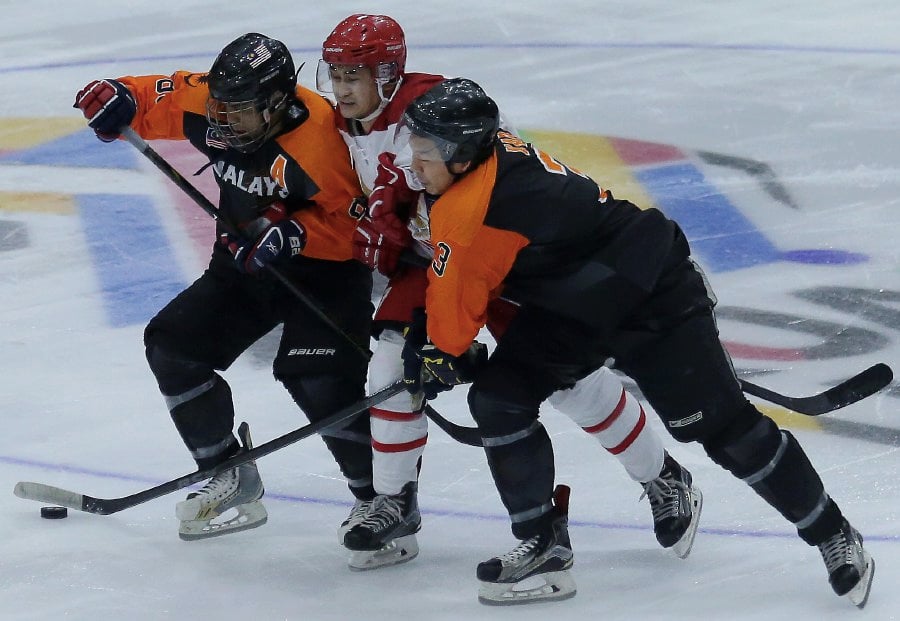 Malaysia’s Eu Jin Yap and Reezman Isa (left) vie for the puck with Indonesia’s
Aditya Rama Putra during the match at Empire City in Damansara.
Pic by AZIAH AZMEE.

The Malaysian national ice hockey squad open their campaign in 2017 Kuala Lumpur SEA Games with a 10-3 beating of Indonesia in their opening match.

However the Malaysians were stunned by an Indonesian goal in the first minute by Robald Wijaya before Khoo Seng Chee equalised two minutes later.

The host team continued to widen the gap with a goal by Brandon Tan Wai Kin in the fifth minute and Hariz Mohammad Oryza in the 13th and 19th minutes while Indonesia replied via Felix Aditya Utama Yussanto in the 18th minute.

In the second set, Malaysia piled up another four goals with Mohammad Hariz scoring in the 21st minute followed by Brandon (24’), Moi Jia Yung (25’) and Khoo (29’).

The national squad maintain their momentum in the third set adding two more goals compared to one by Indonesia.

National coach Kristof Kovago of Hungary when met after the match said the ice hockey squad needed to improve further against Thailand tomorrow as they are quite strong side.

Earlier, the rink at Empire City in Damansara Perdana here was filled to the brim by about 500 spectators to watch the sports featured for the first time in the SEA Games was officiated by the Raja Muda of Perlis Tuanku Syed Faizuddin Putra Jamalullail.

In another round robin match today, Thailand blasted Singapore 7-0.