Ice on the Prize 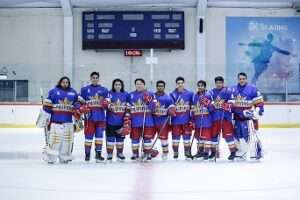 The 2017 Southeast Asian Games gold medal is more than a month old already. But forgive the country’s national ice hockey team if they are still giddy over their unexpected triumph.

If it’s any consolation, they already have their eyes set on a bigger prize.

With the country hosting the 2018 International Ice Hockey Federation (IIHF) Challenge Cup of Asia, the team hopes to make another Disney-like run to the podium in front of a home crowd and build on what a rag-tag “bunch of kids who grew up on SM rinks” accomplished during the Kuala Lumpur SEA Games.

“The gold was really important for the sport of hockey in Manila and in the Philippines,” said goalkeeper Gianpietro Iseppi. “You guys [the media] are now talking to us because we won the gold, if we came in fourth or fifth we probably won’t have this kind of exposure or this opportunity to talk to the young kids out there or the people out there who could potentially learn more about the sport.”

Indeed, the 5-3 stunner over regional power Thailand in the final in Kuala Lumpur lifted the veil of obscurity off the team—and piled up the Mighty Ducks references on the players.

But with the recognition comes the responsibility of continuing push the sport into the public eye. And there’s no better way to do it than being heroes on home ice.

“We are speaking of the perfect timing that the tournament is being held in Manila,” said team captain Steven Füglister. “The SEA Games gold, the new rink inside Mall of Asia, it feels special and everyone is excited to hold this official IIHF tournament in Manila.”

“I’m confident our team will play attractive, fast-paced, and physical hockey and get good results.”

This is the first time the Philippines will join the Challenge Cup of Asia, an opportunity Füglister and the team want to take advantage of to grow the sport’s fan base—and talent pool.

“We hope that we can welcome big crowds to our games and support Team Pilipinas,” said Füglister. “[Anyone] who has never seen a hockey game live will [find it] a thrill to experience it live and at this high level.”

The Philippines is still unranked by the IIHF but the Challenge Cup of Asia could shine a brighter spotlight on the team which, based on its finish in the tournament, could earn spot in the Asian Winter Games.

Already, there is a subplot bubbling beneath the surface of preparations for the tournament next year: a budding rivalry with Thailand.

“I expect that they [the Thais] want to take revenge for the loss at the SEA Games and this could be the start of a nice rivalry,” said Füglister.

Thailand flew to Malaysia brandishing a four-year-old perfect slate and was the favorite to win, and even forward LR Lancero was unsure if they had the chops to take down the regional power.

“We’ve seen Thailand play and they’re really a good bunch of skaters,” said Lancero. “They’re fast, their team plays amazing, and we actually look up to them when they were playing against Singapore.”

“And we were like ‘guys can we do this?’ We were just a bunch of kids growing up in SM’s skating rinks; we are the underdogs.”

But that’s what made the Mighty Ducks movie franchise a hit. The all-too-familiar plot of the underdog overcoming adversity to reach their goal.

Fittingly, it was Lancero who orchestrated the pivotal play in the gold medal match.

The Philippines took a 4-1 lead in the championship but Thailand finally figured the Filipinos out and breathed down their necks, 4-3, in the fourth. That was when Lancero fired a pass straight to Niko Cadiz’ stick for the goal that iced the final count.

Iseppi felt that the team’s obscurity helped them trip the Thais, who fell behind early trying to feel out their foes.

But whether or not the Filipinos could spring a surprise to shake the Thais early didn’t matter. What mattered was they weren’t skating out of Malaysia without the gold medal.

“For me it was what it was—gold or bust,” said Iseppi. “I said it three, four weeks before and everyone was like ‘wow you’re overconfident but I didn’t feel overconfident. I feel like if we played in the level we’re capable of, we were going to win.”

And Füglister believes that win achieved more than just add a gold to the medal haul of the Philippines.

“What makes it even more special is that it has put our sport on the map after years of operating in the shadows with limited awareness in the general public,” he said.

And now that the team is on the sporting map, it is going to do its best to find its way to Asian glory.