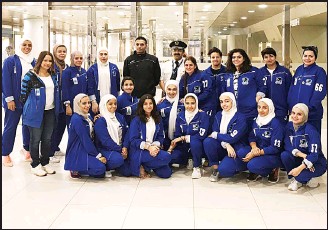 The Kuwaiti women’s ice hockey team is taking part in the international competition which kicks off Monday at the Thai capital Bangkok.

In statement to KUNA, Head of Kuwaiti Winters Sports Club and Kuwait’s delegation Khaled Al-Mutairi said the team left for Bangkok on Sunday. He disclosed the first match will be on Tuesday against America’s ‘Black Stars’, and then they will play on Wednesday against Malaysian side Jazura before the final rounds kick off.

Al-Mutairi added that the team is fully prepared for the competition as it held a training camp in Thailand for three weeks last August, followed by intensive training in one of the ice skating rinks in Kuwait, let alone holding some friendly games.

He affirmed that the girls, whether veterans or promising talents, are properly psyched up to present the best level of performance in the competition. He said the club provided all their administration and technical needs, and most important of all is reserving the local ice skating rink for them to practice locally and also outside the country.

The technical management of the team invested in developing the athletes’ fitness and prepare them to participate in the most important tournament in their career in order for them to compete strongly in this tournament which will see the participation of a number of Asian and international teams. The 2017 CIBC Canada Russia Series is less than two weeks away, signalling the approach of the IIHF World Junior Hockey Championship that gets underway on Boxing Day in Buffalo, New York.

Last year’s silver medal finish in a crushing shootout loss to the Americans on home ice still looms fresh in the minds of many. This year’s event, highlighted by a Canada/USA outdoor showdown at New Era Field on December 29th, presents a new chapter in the North American on-ice rivalry.

For new Hockey Canada Program of Excellence Head Scout Brad McEwen, the 15th edition of the annual Canada/Russia clash is the continuance of a talent evaluation process that began this past summer at Canada’s National Junior Team Summer Showcase in Plymouth, Mich. A total of 31 CHL players that attended the camp will represent their respective leagues in the coming weeks, taking on a group of Russian National Junior Team hopefuls with plenty to play for themselves.

McEwen inherits the Hockey Canada management role from Ryan Jankowski who has become director of amateur scouting with the Buffalo Sabres after four years with the organization.

“It’s a critical evaluation opportunity for us,” said McEwen, who formerly worked as an amateur scout with the Calgary Flames after serving as general manager and director of scouting for the WHL’s Medicine Hat Tigers. “It’s the one time since summer camp that we get a chance to put the kids in their regions and look at different combinations and be able to mix and match a little bit.

“It offers us a chance to give the guys a refresher on expectations should they hope to be with us come Christmas time.”

With so many roster spots up for grabs, the evaluation process is sure to be an exhaustive one.

“There are a lot of spots there to be earned,” affirmed McEwen. “We want to take another good look at the players who attended the Summer Showcase, but also see some other players who have impressed with their teams early this season. These are guys that caught the attention of our selection committee members who have done a lot of work to help us put these rosters together.”

The CHL has won the series in three of the past four years, but not without a challenge. The Russian Hockey Federation continues to send a capable and skilled opposition under long-time head coach Valery Bragin.

“In my last job with the Flames I was able to see quite a few games and came away impressed with some of the Russian players,” McEwen noted. “They use this for their World Junior purposes as well and come over here serious about winning the series.

“It’s a good event for us and it’s good for them too,” he added. “At the end of the day we want to give our guys opportunities and it’s up to them to show that they should be part of where we’re going come Christmas time.”

A total of 29 players from last year’s event competed at the World Juniors, with 15 CHL players earning silver for Canada while 14 claimed bronze with Russia.

72 CHL players will represent their respective leagues in this year’s event, 54 of whom have been chosen in either the 2016 or 2017 NHL Draft. An additional seven players competing in the series are in their first year of NHL Draft eligibility including such QMJHL standouts as Joe Veleno (Saint John Sea Dogs), Jared McIsaac (Halifax Mooseheads) and Benoit-Olivier Groulx (Halifax Mooseheads) along with OHL prospects in defencemen Evan Bouchard (London Knights), Kevin Bahl (Ottawa 67’s) and goaltender Jacob Ingham (Mississauga Steelheads).

This year’s opening leg of the series is set in Saskatchewan as Team WHL hits the ice on Monday November 6th in Swift Current and Tuesday November 7th in Moose Jaw.