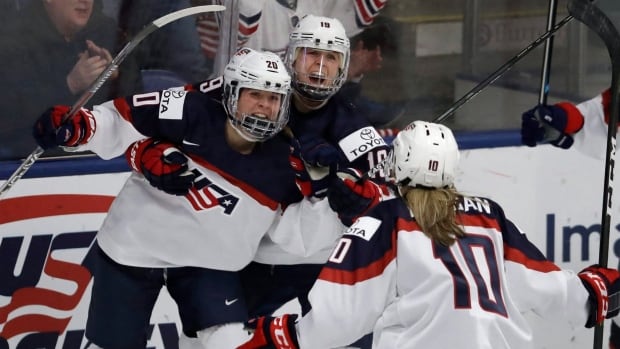 Hilary Knight and Amanda Kessel each added a goal and an assist. Kendall Coyne had a goal, and Dani Cameranesi added four assists.

Maddie Rooney made 18 saves and improved to 3-0 in the Americans’ four games at this tournament.

The United States won the event for the eighth time overall. Better yet, the Americans now have beaten their biggest rivals for the third time in four games over the past month as they tune up for the Pyeongchang Games in February.

Meghan Agosta scored just past the midway point of the third period pulling Canada within 2-1. Knight and Kessel scored power-play goals to pad the margin as the Americans went 3 of 7 with the advantage.

The Russian Olympic team are the Deutschland Cup winners

At the Deutschland Cup, the Russian Olympic team defeated Slovakia 4:2 to become the tournament’s winners!

Alexei Makeev scored an early goal, before two Slovakian goals gave the opponents the lead. Nevertheless, Russia proved to be strong for Slovakia, as Alexei Makeev and Mikhail Naumenkov scored further markers to earn a 4:2 victory!

The Russian Olympic team won all matches at the Deutschland Cup.

United States finish last in the competition losing all their Games.

Eeli Tolvanen scored a power-play goal midway through the third period to break a 3-3 tie with Canada and give the home side victory in the Karjala Tournament with a perfect 3-0 record. The game was played before a sold-out crowd at Hartwall Arena in Helsinki.

The loss put Canada in fourth place with one win and two losses. Russia and Sweden finished with 2-1 records, the former receiving superior placing based on goals difference.

The Czechs tied with Canada with one win and the Swiss finished in last, going winless in the tournament.

Normally a pleasant event during a league break in European club play, this year’s Karjala Tournament had greater importance because teams used the event as a testing ground for players hoping to represent their countries at next February’s Olympics. To that end, Canada and Switzerland were added to the schedule which is usually reserved for four teams (Finland, Czech Republic, Russia and Sweden).

Finland won its three games thanks to several positive factors. Mikko Koskinen was sharp in goal for Suomi in two games; the defence allowed only two goals a game; and, the players gelled like a team. As well, 18-year-old Miro Heiskanen played like a veteran and looks to be a good bet to go to PyeongChang.

Russia scored the most goals of the six teams (13), in large part thanks to Mikhail Grigorenko, who scored four of his team’s goals and finished atop the scoring table with six points. Three of those goals came on the final day in a 5-2 win over the Czechs.

Sweden lost a 3-1 decision to Finland to start the Helsinki part of the tournament and played its best in completely shutting down Canada in a 2-0 win. Par Lindholm was the hero there, scoring two power-play goals – one in the second, one in the third – to give Tre Kronor all the offense it needed.

The team then posted an emphatic 5-3 win over the Czechs thanks to two more power-play goals, these from Dick Axelsson in the third period to break a 3-3 tie. Indeed, five of the team’s eight goals in the tournament came with the extra man.

Canada’s GM Sean Burke has had to cobble together a lineup like no GM in Canada’s long Olympic history. While most of the players are from the KHL, there are also participants from Switzerland, Sweden, the AHL, and NCAA. Coach Willie Desjardins had to be happiest with the final game when the team showed some offensive flair and legs that had been absent previously. But there is clearly work to be done before Canada can claim to be in the medal mix for PyeongChang.

The Czechs haven’t won a medal at the World Championship since 2012, the longest drought in the nearly hundred years of IIHF participation, and this result continues a worrisome trend. With its best group of players in the NHL, they are fighting to generate offence and play strong defence.

The Swiss are clearly in trouble without their NHLers. The incredible success of the nation’s program has now sent 13 players to the world’s top league, but without those stars, coach Patrick Fischer, like every other coach, has had to scramble. Losing all three games and scoring only six times doesn’t bode well for next February.

In all, teams learned a great deal about who they’ll have and what kind of team they’ll have. The news is good and bad, but time is running short. One can be sure the various general managers and coaches will confer in the coming days and do what they can to improve further. In the meantime, there are only two mini-tournaments left before Korea – the Channel One Cup in mid-December in Moscow and the Spengler Cup at the end of the year in Davos, Switzerland. Costa Rica will be hosting the first Castillo International Ice Hockey Tournament with the participation of a home team, and three international sides, including one form the Falkland Islands. The competition is scheduled to take place at the Castillo Country Club in San Rafael de Heredia, on 18/19 November.

“The idea cropped up during a trip five years ago to the Falkland Islands, in 2012, where I met representatives of local teams. Later on I also made ice hockey friends with people from Calgary and Los Angeles, and finally we managed to organize the competition and a schedule”, according to Bruce Callow, organizer of the event and founder of the Costa Rica Castillo Knights team.

The overseas teams are the Stanley All-Stars from the Falklands, Canadian Citizens and Ruination from LA. The competition will be played at the Senior category and includes some former professionals such as goalie Jason Wood from UK.

“At the end of the day, this first ice hockey tournament in Central America is geared to make the sport grow, to attract young people of all ages, and this kind of events will help promote the ice hockey game in Costa Rica”, adds Callow. “I can assure you that once you’ve tried hockey and get the knack of it, you’ll forget about soccer”.

Callow advanced that for next year’s edition there has also been strong interest from teams in Puerto Rico, Mexico and Argentina, which are planning to participate.

Likewise he also revealed that ice hockey has been played in Costa Rica for twenty years and the Castillo Country Club offers its members the chance of learning to play the game. The ice ring was only recently remodeled and can hold some fifty skiers at the time.

According to the schedule Stanley All Stars play hosts Castillo Knights on the morning of Saturday 18th November, and in the afternoon Canadian Citizens. On Sunday morning Falklands play Ruination from Los Angeles, and in the afternoon, at 14:00 hours and 16:00 hours, the bronze and gold medals will be disputed. Falklands will be represented by Stanley-All Stars