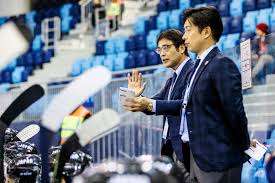 Yuji Iwamoto has taken over as the head coach of the Japanese national team and wants to get his young squad focused and pull in the same direction.

Ted Nolan with Poland and Jarmo Tolvanen at Hungary made their debuts already on 30th September against each other before meeting again in the November tournament while for Yuji Iwamoto at Japan and Clayton Beddoes with Italy this November international break marked their first games with their national teams.

“There is a lot of pressure to perform well. The last couple seasons Japan has not played as well as they would have liked, it has not been ideal,” said Iwamoto about the current state of the Japanese national team. The country of the rising sun took a young roster to Budapest as Japan is trying to build up the next generations and make the jump to the next level.

Japan is a proud country with an ice hockey tradition. Japan had a span of seven seasons in the late 90s and the early 2000s where they were set as member of the top division. Right now Japan tries to move back from the third to the second level where they had played for just about the past decade. “This is why the federation made the change. They want to move up from Division IB. The federation believes that Japan is a Division IA or top-division country,” said Iwamoto as he talked about the goals of Japan for the upcoming season.

After finishing his playing career, which he spent entirely with Sapporo and represented his country at three World Championships, Iwamoto turned to coaching. He coached in the Japanese youth system and was the assistant coach for the Japanese U18 and U20 national teams before taking over as head coach of the U20 team. He spent three seasons as an assistant coach in the NAHL where he had a chance to get a real taste of North American style which he now has an opportunity to put mold with the Japanese mentality. After coming back from the United States, he coached three seasons with the Nikko Ice Bucks in the Asia League before being named the head coach of Japan.

“I learned that it is very important to create competition and the players need to compete for everything. This might have lacked the last couple of years. This needs to change and this is the top priority at this time for Japan,” said Iwamoto when asked what he had learned in the United States and how he could apply it to his current team.

Head coach Iwamoto also talked about what he was trying to achieve with his team during his and his team’s stay in Europe. “Since Japan is an island nation, we can not just take a quick and easy trip to the neighbouring country to face quality competition during a three-day tournament. We want to take full advantage of coming to Europe to hold a longer training camp. We just started to put together our team for the upcoming World Championship. We have a new plan and I want the players to become familiar with our new tactics and systems. This is the first steps of our long path. I am evaluating players not only just what is on the ice but also how they act off the ice,” he said.

His first tournament was a good start. Japan had a 2-1 record playing against Division IA nations with wins against Hungary and Italy and a 3-2 loss against eventual tournament winner Poland.

Iwamoto was straight to the point when asked what kind of team he wants for the 2018 IIHF Ice Hockey World Championship Division I Group B in April. “This is very exciting to be the head coach of the Japanese national team and to be managing all these young players,” he continued. “Our goal is to move up to the Division IA with our defensive style in which we are very aggressive.”

It sounds like Japan has one goal on their mind and that one goal is doing what they just missed out on last season in Belfast, earning promotion.

Japan will face Ukraine, Lithuania, Estonia, Croatia and Romania in the battle for top spot at the 2018 IIHF Ice Hockey World Championship Division I Group B in Kaunas, Lithuania.