The Swiss National Team beats HC Davos in the semi-finals 8:3

The Swiss National Team secured its spot in the final at this year’s Spengler Cup by winning against Davos 8:3. The hands-down victory only became evident when the home team began to lose strength; Davos was leading 3:2 up until the 37th minute.

The initial situation was crystal clear: While the semi-final was Switzerland’s 3rd game in 5 days, for HC Davos it was the 4th game in 72 hours. Even though the physical per-conditions were very different, the home team delivered several spectacular and hard-fought battles for almost two full periods. In the initial phase, Robert Kousal and Brandon Buck both shot the equalizing goal almost immediately. In the 36th minute, Magnus Nygren sensationally put the Davos team in the lead (36.) in a power play situation.

However, this was to be their last show of strength. 77 seconds later Davos fell behind when Michael Fora and Dominic Schlumpf both knocked the puck in the net for a score of 3:4. Team Suisse relentlessly demonstrated their vigor while keeping the tempo high in the final period. By the 45th minute, Eric Blum, Reto Schäppi and Tanner Richard had increased the lead to 7:3.

Switzerland will face the defending champion Team Canada in the final on Sunday at 12 noon. While the Canadians will seek their 15th Spengler Cup win – equalizing the record held by HC Davos – Switzerland has never moved past the quarter-finals in this traditional tournament. 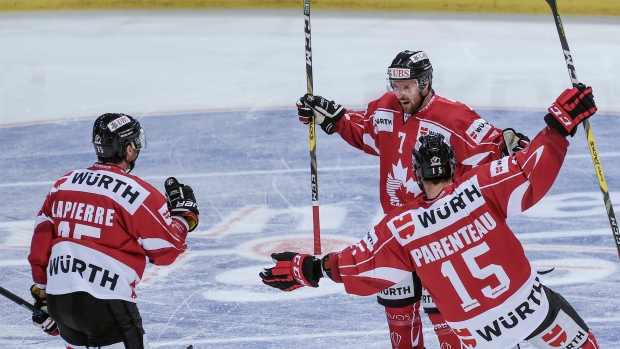 Zach Boychuk scored in the third period and Maxim Noreau iced the victory with an empty-net goal.

Lukas Cingel and Michal Dragoun tallied for the Czech side.

HC Davos is scheduled to play Switzerland in the other semifinal later Saturday.

The winner will play Canada — the two-time defending champion — in Sunday’s final.