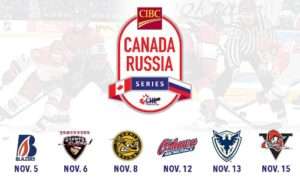 The six-game series features regional league teams of Canadian National Junior Team candidates competing against the Russian National Junior Team and is an integral part of the identification process for Team Canada prior to the IIHF World Junior Hockey Championship.  The 2018 event will open with two games in the WHL, followed by two OHL match-ups, and ending with a pair of contests hosted by the QMJHL.

“Over the past 15 years we’ve seen the Canada and Russia rivalry ignite passion in CHL communities across our great country,” said CHL President David Branch. “This is truly a special event that showcases many of our league’s best players and future Canadian National Junior Team stars who will compete to defend gold on home soil at the 2019 IIHF World Junior Championship in Vancouver and Victoria.”

Since the event first began in 2003, CHL teams have played to an overall record of 61-22-1-6 and have won 12 of the 15 series including three straight.  The competitiveness of the rivalry has grown in recent years with five of the last eight series decided in the final game including last season where a shootout was required to decide the overall winner for the first time in event history.  A total of 36 players from last season’s event competed in the 2018 IIHF World Junior Championship in Buffalo including 17 CHL players who won gold for Canada.

“The Canada-Russia rivalry is legendary and Canadians from coast-to-coast-to-coast will be cheering on our Canadian teams as they take in the action for this iconic showdown,” said Stephen Forbes, Executive Vice President, Banking Centres, CIBC.  “We congratulate the six host cities of the 2018 CIBC Canada Russia Series and we look forward to celebrating with our clients and employees in these communities, as we support the next generation of hockey talent through our partnership with the CHL.”

The 2018 CIBC Canada Russia series is supported by CHL associate sponsors Cooper Tires and Sherwin-Williams.  All games will be broadcast nationally on Sportsnet and TVA Sports.