Czechs First to Advance to Semifinals With Win Over Finland 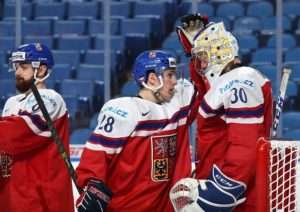 The Czechs are headed to the semifinals for the first time since 2005 thanks to a 4-3 shootout victory over Finland on Tuesday.

The game started out well for the Czechs, scoring the game’s first goal. Filip Zadina, one of the top draft prospects heading into the June NHL Draft, has been dynamite on the power play at this year’s tournament and he proved it once again at 6:20. Martin Necas would feed Zadina to the right of the Finnish net, a pass that no one was close to blocking. Zadina would record his fourth power play goal of the tournament with a tremendous wrist shot over the blocker of Ukko-Pekka Luukkonen, putting the Czechs up by one early.

The Finns did a better job of controlling the puck in the first period and they were rewarded with a goal earlier in the second. The Edmonton Oilers must be loving sixth-round pick Aapeli Rasanen, who climbed up the ranks to become Finland’s top winger, scored his fourth goal of the tournament when he ripped one past Josef Korenar to make it 1-1.

A few minutes later, the Finns scored again. This time, Olli Juolevi made it 2-1 after his point shot blew through the Czech challengers, giving Finland the advantage after tremendous pressure.

The Czechs weren’t ready to find themselves down by a goal heading into the second intermission. At 14:17, Kristian Reichel scored his third goal of the tournament after using his great speed to blow past a Finnish defender before beating Luukkonen on the breakaway, tying the game back up again.

Unfortunately for the Czechs, their streak of missing the semifinals (which dates back to 2006) was at risk of continuing. At 6:30, Kristian Vesalainen made it 3-2 after a scramble in front, with the sniper picking up a small hole in the net and putting it in to give the Finns their second lead of the game.

But the Czechs weren’t ready to back down. With the net empty with about three minutes to go, Zadina got his second goal of the game and fifth of the tournament after tipping in Jakub Galvas’ shot from the point, tying the game up at three to force extra time.

Finland struggled in the shootout, scoring just one goal. The Czechs found the back of the net twice, however, giving the come-from-behind victory to the Czech Republic on Tuesday afternoon.

The Czech Republic will wait for Thursday’s semifinal opponent following Canada vs Switzerland later in the day at KeyBank. For Finland, the team struggled throughout the tournament, ending their tournament early for the second straight year.