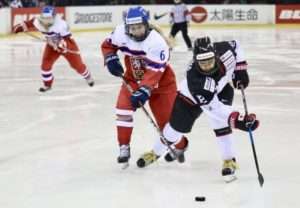 The Japanese women’s national hockey team hasn’t posted a single win in its previous two trips to the Winter Olympics.

But “Smile Japan” isn’t just looking for a first win at next month’s Pyeongchang Olympics. It’s looking to capture a medal.

Although that might sound like a lofty goal, the Japan team will go to South Korea with unshaken confidence.

On Tuesday night, Japan, which will be making its third Olympic appearance, completed a four-game warm-up series sweep with a 4-1 victory over the Czech Republic at Tokyo’s Dydo Drinco Ice Arena.

The hosts played two games apiece against Germany and the Czechs, who are ranked Nos. 7 and 8 in the world, respectively, but did not qualify for the Olympics.

“We were able to test ourselves in different situations against different teams,” Japan forward Haruna Yoneyama said, summing up the series.

Japan’s biggest strength is its defensive solidness, which the team has made a point of improving since Takeshi Yamanaka took over as head coach in the summer of 2016. Capitalizing on its speed and stamina, Japan defends with all five players.

That was on full display in the warmup series. Japan, which allowed 16 goals in five games at the Sochi Olympics (second most among the eight teams) four years ago, gave up only two goals over the four contests.

“We did a good job of limiting our opponents’ shots,” Japan captain and forward Chiho Osawa said of her team’s defensive game. “That’s a result of all our five players being aware of our defense.”

Japan has been allocated in Group B with Sweden, Switzerland and the unified Korea team in the preliminary stage of the Olympic competition. Group B is considered to have an easier path to the knockout round than Group A, which has the world’s top three-ranked countries in the United States, Canada and Finland.

While Japan, which is ranked No. 9 in the world, is confident about protecting its own goal, the team still needs to improve in scoring if it is to achieve a podium finish at the Pyeongchang Games.

“Scoring is our issue,” Osawa said. “There were times when we kept attacking but weren’t able to score. So we’ve got to improve on that.”

But some players feel Japan has added more offensive variety to its arsenal.

“Compared to four years ago (before Sochi), our defense has gotten more solid,” Yoneyama said. “And we’ve increased our ideas to score.”

Japan scored a total of 14 goals over the four contests.

Now Japan, which first competed at the Olympics during the 1998 Games in Nagano, is thrilled to compete at another Olympics with the most potent squad in the nation’s history. Depending on how well it does in South Korea, the team could find itself under a dazzling spotlight from the public and media.

Oyama, 25, said that just going to the Olympics had previously been the biggest challenge for the team. But she added that this time they are in a position to potentially earn a medal. The Tomakomai, Hokkaido, native said that the players would battle with pride and responsibility to achieve the feat.

And the players’ lives and the country’s women’s hockey scene as a whole could change forever.

“We didn’t win a game four years ago, but still our circumstance changed with us just having competed at the Olympics,” said Osawa, whose father Hirotoshi is a former Japan men’s national team player. “If we will come up with (a medal) this time, it will change more drastically. We would like to come home as a winner.”