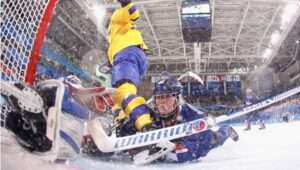 The result puts both Sweden and Switzerland into Saturday’s quarter-finals. The Swedes are questing for their first Olympic medal since 2006’s silver. Outmatched if valiant Korea remains pointless through two games in its Winter Games debut.

Contrasting with Korea’s previous 8-0 loss to Switzerland, where the one-woman wrecking machine named Alina Muller tied single-game Olympic records with four goals and six points, the Swedes got scoring throughout the lineup.

A Korean proverb says: “At the end of hardship comes happiness.” Awaiting their last Group B game against winless Japan on Wednesday, the goalless hosts must hope that’s true. Sweden faces the Swiss in a showdown for first place in Group B that day.

It was another fantastically animated atmosphere at the Kwandong Hockey Centre with screams of anticipation from the crowd of 4,244 each time coach Sarah Murray’s team touched the puck. Murray made one roster change, substituting North Korean forward Song Hui Ryo in place of Su Hyon Jong, who carried the Olympic torch with captain Jongah Park at Friday’s spectacular opening ceremonies.

The squads of North Korean cheerleaders were in perfect sync again. Unfortunately the Korean penalty killers couldn’t say the same on the opening goal. One youngster’s pain was another gain.

At 3:42, the 16-year-old forward Heewon Kim – Korea’s youngest player – was sent off for roughing after a goalmouth scrum. It took just 18 seconds for the 17-year-old defender Nylen Persson – Sweden’s youngest player – to get the puck from Alasalmi and beat So Jung Shin with a low shot inside the goalie’s right post.

The Damkronorna kept coming. A couple of minutes later, Sabina Kuller waltzed in over the Korean blue line and knifed a backhand off the cross bar. At 9:47, Lundberg made it 2-0 with a slap shot that squeezed under the goalie’s arm and over the line.

The Koreans got a bona fide chance when Jingyu Lee came down the right side on a 2-on-1 to unleash a high zinger, but Grahn’s glove said no. Moments later, in a classic case of tit for tat, a Swedish 2-on-1 saw Lisa Johansson sending the puck across to Erika Uden Johansson, who banged in her own rebound for the fourth goal at 17:04.

In the second period, Winberg, who tied for the 2014 Olympic scoring lead with Finland’s Michelle Karvinen (seven points), stormed over the blue line and beat So Jung Shin with a nice forehand move to make it 5-0 at 4:08.

Korea generated good pressure during two subsequent power plays, but couldn’t get anything going beyond more screams from the crowd.

Sweden went up 6-0 at 1:09 of the third period when Nordin tipped in Lundberg’s high point shot. At 1:45, Winberg pivoted in the faceoff circle and her shot was accidentally deflected in by Korea’s Randi Heesoo Griffin. It was just that kind of night for the representatives of the Land of the Morning Calm.

On the rush, Stenberg converted Winberg’s beautiful cross-ice feed at 5:34 to round out the scoring at 8-0. A Swedish proverb says: “Attack is the best defence.” It was hard to argue with that here.

Swiss on brink of QF

Sara Benz led the way for Switzerland with two goals in a 3-1 victory over Japan, and the 2014 bronze medallist is now all but certain to progress to the quarter-finals.

It was a special moment for Benz, a 25-year-old forward with Zurich Lions: she missed the last two seasons with concussion problems, and has only returned to Swiss league action this term. Twenty points in 14 games got her back into the international set-up in time for the Olympics, and after three assists against Korea she relished her decisive double blast in this game – not least because it secured a second victory in the competition.

“For us it was important to calm down in the second period and get our self-confidence back,” Benz said. “We’re a really good team. We just have to believe in ourselves, and then we can score a lot of goals and win against a lot of opponents.”

Although the final margin was fairly comfortable here, the Swiss had to hold off a lively Japanese team that had the better of the first period and could have pulled off a surprise victory with greater composure in front of Florence Schelling’s net.

After a narrow loss to Sweden in Saturday’s opening game, Japan knew that three points would be vital if it wasn’t to rely on an improbable sequence of results to sneak into the last eight. For a team that had never won a game at an Olympic tournament, that was already a tall order; making matters worse, Rui Ukita, scorer of Japan’s only goal against Sweden, served a one-game ban.

At the start, though, Japan was dominant. Switzerland, so devastating on offence two days earlier, struggled to generate opportunities and Nana Fujimoto was a virtual spectator as she faced just one shot in the opening frame. Japan, ever mobile, caused problems at the other end; swift skating and pacey puck movement had the Swiss defence chasing shadows at times, but the Asian team lacked the finishing to match its approach play.

The Japanese had a golden chance to open the scoring midway through the opening frame with 97 seconds of 5-on-3 power play. But Switzerland survived, helped by Shoko Ono’s failure to connect with Hanuna Yoneyama’s feed from the doorstep and Schelling’s anticipation when Hanae Kubo tried taking her time to psyche out the goalie, only for the shot to bounce to safety off the upper arm.

“Oh my God!” Schelling exclaimed. “I think that was the game-changer. That was the key. The game would have looked a lot different if they had got on the scoreboard first.”

Kubo, whose pace, direct play was a persistent threat, had another great chance when the teams were back to equal strength. Some great stick-handling saw her dance through the Swiss defence, with Phoebe Staenz left trailing in her wake. This time, though, the shot looped over the bar without testing the Swiss goalie.

Schelling had to be on her mettle as the first session came to a close, with a smart reaction save late on to ensure that she completed her fourth period of the competition without allowing a goal.

“We were kind of overwhelmed in that first period by how fast they were, how strong they were,” Schelling added. “But then in the second period we were able to score and bring our momentum to the game.”

If Japan had grounds for optimism at the first intermission, there was also cause for concern. A penalty late in the first period ensured the Swiss would be begin the next frame on the power play, and that was enough to tip the momentum away from Takeshi Yamanaka’s team. Dominique Roegg tested Fujimoto early on and the Swiss attack awakened at last. Japan fashioned one more neat chance when Haruka Toko’s no-look pass found Ami Nakamura, but her attempt to spin and release a backhand shot failed to test Schelling.

Switzerland punished that miss almost immediately when Sara Benz got the first of two power play goals. Ruegg’s wild shot came back off the boards, and Benz was first to react as she squeezed wrister onto the top shelf from an acute angle with Fujimoto left stranded. Another penalty soon followed, and Christine Meier showed great vision to set Benz behind the Japanese defence with a superb pass; Benz delivered an emphatic finish, and Japan’s goal-shy roster was always likely to struggle from that point on.

Switzerland added a third goal early in the final session when Alina Muller – the leading scorer in the women’s tournament so far after a six-point haul against Korea – intercepted a loose pass in her own zone and raced up the ice before firing past Fujimoto from the right-hand face-off spot.

But Japan finally got the goal its efforts deserved with 12 minutes to play when the hard-working Kubo became the first player to score on Schelling at this year’s Games. Kubo’s touch looped Mika Hori’s shot beyond the reach of the Swiss goalie, denying her the outright record for shut-outs in Olympic play. Schelling is currently tied with Canada’s three-time gold medallist Kim St-Pierre on four shut-outs apiece.

Switzerland’s win means that the Group B picture could be almost wrapped up after tonight’s game between Sweden and Korea. A Swedish victory would ensure that the two European nations will progress to quarter-final match-ups against the teams finishing third and fourth in Group A, while the Asian countries will go directly to the classification round.