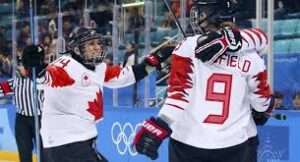 Canada did it by scoring early in every period. Jenn Wakefield had two of the three, and Shannon Szabados had a fairly easy time of it to record the shutout by blocking 19 shots. Canada fired 49 shots on the two OAR goalies.

The win sets up another gold-medal showdown between these two titans of women’s hockey in three days’ time. Russia, meanwhile, will play Finland for bronze on Wednesday.

Canada’s win tonight in Gangneung was hardly the all-out thrashing many expected. Indeed, the Canadians looked a little rusty (from a four-day layoff) and a little disinterested (in playing an opponent they’ve never lost to).

Be that as it may, they got the job done and have plenty of time–too much time?–to prepare for the most important game of the last four years.

Canada got exactly the kind of start it typically gets against lesser teams, scoring early and dimming their hopes of upset right away. Tonight, it was Jennifer Wakefield who got the goal, but it was Natalie Spooner who did the heavy lifting.

She went into the corner among a scrum of players, emerged with the puck, and got it to Wakefield in the slot. Wakefield wired a clean shot in at 1:50 for the quick lead.

The Olympic Athletes should have tied the game midway through the period. Yelena Dergachyova had the puck to the back side of Shannon Szabados with a wide-open net, but somehow she managed to poke the puck laterally, into the goalie’s pads.

Canada then made it 2-0 with a goal early in the second. This time it was a little razzle dazzle from Melodie Daoust in the OAR end before she dished off to captain Marie-Philip Poulin, who backhanded a high shot over Valeria Tarakanova’s glove.

The third repeated a pattern asWakefield got her second of the nigth just 1:59 in. She glided out in frotn and took a quick shot that went under the arm of Tarakanova and in from a terrible angle. Just 31 seconds later, Emily Clark got to a loose puck from close range and snapped a fourth goal in.

Coach Alexei Chistyakov was in no mood and quickly replaced Tarakanova with Nadezhda Alexandrova. Still, Rebecca Johnston connected for a power-play goal at 14:08 when she smacked home her own rebound. 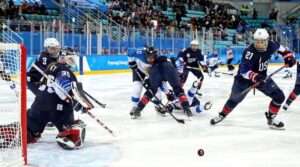 The U.S. will face the winner of the Canada-Olympic Athletes from Russia semi-final for gold at the Gangneung Hockey Centre at 13:10 on Thursday.

“It doesn’t matter who we play,” said veteran Gigi Marvin. “We’re so excited. This is what we came here to do.”

The Americans, featuring six skaters who settled for silver at both the Vancouver and Sochi Olympics, are hoping to win their first and only Winter Games gold since 1998. The Canadians are the four-time defending champions.

Especially for North American fans, it is hard not to anticipate a revival of one of the greatest showdowns in women’s sports: a U.S.-Canada final. It would take a OAR upset of Kremlin-sized proportions to prevent that.

“The rivalry has been around since before I was born,” said Dani Cameranesi, who led the way against Finland with two goals and an assist. “We’re all looking forward to the game, regardless who we play. Representing our country on the biggest stage is something we all dream about when we’re little kids. And now we’re here playing for a gold medal, which we’ve been preparing for all year.”

Marvin, Jocelyne Lamoureux-Davidson and Hilary Knight added singles for the Americans. This was America’s eighth straight Olympic victory over Finland, with zero losses.

The U.S. power play, traditionally a formidable weapon, entered this game ranked seventh out of eight Olympic teams (1-for-10). However, it came to life at the right time here, clicking twice in the second period and once in the third to put the game out of reach.

“We took too many penalties today, for sure,” said Finnish captain Jenni Hiirikoski. “They got three goals on the power play, and that was a big difference. They were really good today.”

Despite losing defender Ronja Savolainen to injury on a dangerous first-period hit, the Finns persevered, but simply couldn’t keep pace with the high-octane American attack.

Facing arguably the world’s best goalie in Noora Raty on Monday, U.S. coach Robb Stauber had an intriguing choice to make between the pipes. With three capable options in Maddie Rooney, Nicole Hensley, and Alex Rigsby, he picked Rooney, the 20-year-old University of Minnesota-Duluth product who made 23 saves in the 3-1 preliminary round win over Finland and 21 saves in the 2-1 loss to Canada.

This, however, couldn’t be called a goaltending duel. Rooney had a quiet time as the U.S. outshot Finland 38-14.

Raty acknowledged the reasons for the Americans’ success: “They can focus on playing hockey full-time. They’re true pros, they’re physically in shape, and they’ve got good coaching.

In five Olympic semi-final appearances, the U.S. has never lost except for the famous Swedish 3-2 shootout upset at the 2006 Olympics in Turin. Monday was the first time the U.S. faced a nation other than Sweden.

Finland entered these Olympics with better odds of upsetting one of the North American superpowers than anyone else. In the preliminary round of the 2017 IIHF Women’s World Championship, they defeated Canada 4-3 – their first win over the Canadians in IIHF history. Then they battled the host Americans in a 5-3 loss. Ultimately, coach Pasi Mustonen’s team claimed Finland’s 12th bronze medal in Women’s World history.

“We’ve battled Finland all year,” said U.S. forward Amanda Pelkey. “They’ve never given us an easy game. That proves a lot to us and to the women’s game.”

There may still be a Finnish women’s hockey medal in PyeongChang, but it won’t be gold or silver.

“We’ll be ready when the puck drops for the bronze medal,” said Hiirikoski. “We have a really good team and have had a great tournament. We’ll enjoy the moment and try to win the medal.”

The Americans drew first blood on their second shot at 2:25. From behind the Finnish goal line, a forechecking Duggan centered the puck to a wide-open Marvin, who beat Raty stick side from the slot.

Midway through the first, Savolainen, a 20-year-old who plays for Sweden’s Lulea HF, was injured after a knee-on-knee collision with Duggan, slamming into the side boards in the Finnish zone. Savolainen had to be helped off to the dressing room. There was no penalty on the play, and the Finns protested.

The Americans kept coming. With under four minutes left in the first, Monique Lamoureux-Morando stickhandled to the Finnish goal and slid a backhand behind Raty, but it went wide of the post through the crease.

Camaranesi put the U.S. up 2-0 with 1:22 left in the first when she gobbled up an ill-advised Susanna Tapani pass in the Finnish zone and snapped the puck under the cross bar. The U.S. outshot Finland 11-2 in the first period, and their ability to get to quality scoring areas with their speed was taking a toll.

“Of course, we always try to keep the score close at the start, but it’s a hockey game, and it’s not easy,” said Hiirikoski. “We have to be able to play through that.”

Stauber’s women continued attacking in waves in the second period. Midway through, Karvinen had a quality chance off the rush that Hensley stymied with her right pad. Also, Savolainen returned to the game. But otherwise, Finland’s positives were few and far between.

The U.S. got an extended 5-on-3 opportunity and cashed in at 13:21, with just two seconds left in the two-man advantage. Kelly Pannek sent a beautiful cross-ice pass that Lamoureux-Davidson one-timed home from the left faceoff circle for her third goal of these Olympics. On the ensuing 5-on-4, Knight stood in front to tip Sidney Morin’s shot from the line past Raty just 34 seconds later. It was the first goal of the tournament for the 2015 and 2016 Women’s Worlds MVP.

That eruption killed Finland’s hopes of a comeback.

Just 45 seconds into the third period, Raty had little chance on the third U.S. power play goal. The Americans worked the puck around the zone and Brandt found Camaranesi unguarded in front for her second of the afternoon.

Cameranesi wasn’t shy about assigning credit for her semi-final success: “I saw Hannah Brandt and Amanda Kessel working hard in the corners and they gave me nice passes in the slot. Both goals I owe to my linemates.”

The U.S. offence, which has lagged behind its pace of 22 goals in five games from Sochi, appears to be gathering steam.

“We’ve been working on getting the puck to the net,” said Cameranesi. “We’ve been playing well, but in our last game there were a few bounces that didn’t go in. We’re working hard, getting gritty, and hopefully banging in a few.”

It would also appear that Rooney has the inside track to start in goal in the gold medal game. Hensley, who backstopped the Americans to a 3-2 overtime win over Canada at the 2017 Women’s Worlds, sat on the bench versus Finland. Rigsby, who replaced Jessie Vetter in the 7-5 gold medal win at the 2015 Women’s Worlds and blanked Canada 1-0 in overtime in the 2016 final, has yet to play at these Olympics.

Goaltending will be exponentially more important in the final, especially if the U.S. faces Canada. The Americans fired 45 shots at Canada’s Genevieve Lacasse in the preliminary-round loss and only one got past her. Indeed, everything is magnified when the most important game on the women’s hockey calendar comes around every four years.

“It’s going to be a tough battle no matter who we end up with and quite frankly I’m glad our game is done and we did our part,” said Stauber. “We’re going to be in the gold medal game, and that’s the most important thing.”