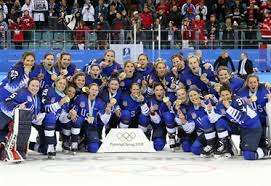 In fact, the shootout mirrored the game exactly. The U.S. led 1-0, trailed 2-1, and fought back to win both, 3-2. The U.S. goalie, 20-year-old Maddie Rooney, outduelled Canada’s two-time Olympic gold medallist Shannon Szbados to secure the win.

Lamoureux’s winning shootout shot was, as they say, sick. Moving in slowly, she made a couple of left-to-right dekes that had Szabados on her back.
“I was told after the fourth shooter that I was going to be the sixth one if it came to that,” Lamoureux explained. “Coach Stauber asked if I wanted it and I said, ‘Absolutely.’ I came in on a few inside edges, coming in slow. I knew that was what I was going to do. Szabados is a great goalie. She’s an amazing goalie. I knew I had to sell the shot, and I did.”

“I can’t think about anything except pure pride, excitement, and honour for our team,” said winning captain Meghan Duggan. “A lot of us have wanted this since we saw the 1998 team win 20 years ago. To have this experience together, to represent our country is the greatest honour in the world. It’s one of the greatest days of all of our lives.”

The U.S. men won their only gold medals 20 years apart (1960 and 1980), and the women have now done the same thing. They won in 1998 in Nagano, but not again until today. They have now won all top IIHF tournaments since 2015, including three Women’s Worlds and this Olympics.
“It gives me the chills,” said Kendall Coyne. “It’s unbelievable. A lot of us are here because of the ‘98 team. We were inspired by their victory. So hopefully there’s a ton of girls that pick up hockey in the United States and all over the world. This was a tremendous win, and the future generations are really going to soar from it as well.”

Canada’s run of Olympic golds ends at four, but this was another classic between these great rivals who simply refuse to give an inch and refuse to give up.

“We didn’t come here for a silver medal, so I’m sure everyone can imagine how losing feels,” said Canadian forward Blayre Turnbull. “It’s not a great feeling at all.”

“Resilience is a great word,” Duggan continued. “The situation didn’t faze us at all. We’ve talked a lot; our mission has been clear. We stay in the moment, and we showed that today. We took it minute by minute, I knew we were going to come back and tie it up. I’m just so proud of the team, and I’m really excited to celebrate with the girls.”

“Obviously the past impacts people,” added Gigi Marvin, “but I think even more it’s not about the past but what we take and learn from it. Every single person really dug deep and found it in themselves to never lose hope and just trust that there was a greater purpose.”

“People kept saying we never beat Canada but we knew we could be them,” said Dani Cameranesi. “We knew that we had it. We knew we had a great group of girls. We’ve been dreaming of it for so long and it feels amazing.”

“I’m extremely proud of the girls,” said Canada’s coach Laura Schuler. “It was a hard-fought game, and although it’s not the result we wanted, I think we played a good game.”

In the end, Canada’s conservative play in the third period cost them as they tried to defend a 2-1 lead. The Americans struck for the tying goal by capitalizing on a bad Canadian line change which left Monique Lamoureux wide open on the left wing. She went in on goal and wired a shot over Shannon Szabados’s glove at 13:39 to tie the game and set the stage for extra time.

The play actually started at the other end of the ice when Canada’s Laura Stacey came down on a two-on-one. Her shot to the far corner went off the shaft of goalie Maddie Rooney’s stick, and the Americans made the transition from defence to offense in a blink.

The overtime was pressure-filled, and the Americans carried the play for much of it. Megan Keller had a clear break, only to be stopped by Szabados, and with 1:35 to play the Canadians had a power play. At the side of the net, Rebecca Johnston came close, but couldn’t convert.

In the shootout, Gigi Marvin scored on the first shot but Meghan Agosta came right back to tie it. Two shots later, Canada went ahead on a goal from Melodie Daoust, the tournament MVP, but on the fourth American shot Amanda Kessel scored.

After five shots, teams were tied 2-2, and the order was reversed. On the first extra shot, Jocelyne Lamoureux scored, and Agosta, shooting again, couldn’t tie it. The Americans won gold.

The game started with extreme caution and care as neither team wanted to give the other an early advantage. The first shot of the game didn’t happen until 3:41 (Canada), and the Americans didn’t get their first until 7:48.

Once the preliminaries were done with, though, the Americans spent much of the rest of the period on the power play as Canada was whistled for the only three infractions of the opening 20 minutes.

Canada did a masterful job of killing penalties, but given the firepower on the U.S. side, this couldn’t last forever. In the final minute, a Sidney Morin shot was tipped by Hilary Knight past Szabados, with 25.4 seconds remaining, breaking the ice and giving the U.S. a 1-0 lead.

That lead didn’t last long. Canada tied the game on the merits of great hustle and great hands. Blayre Turnbull did the hustling, chasing down her own shoot-in and firing a high shot to the net for the corner boards.

The hands came to the fore when Haley Irwin batted the puck out of the air from in tight, batting it in at 2:00. But no sooner had they tied the game than they were called for a fourth straight penalty.

After killing that off, they went back to the attack and took the lead. Morin lost the puck at centre ice and Agosta tore down the left wing. As players from both teams skated to the goal, Agosta calmly passed back to Marie-Philip Poulin, the trailer, and she snapped a shot short side that beat a screened Rooney.

Canada nearly made it 3-1 when it finally got a power play midway through the period, but Jennifer Wakefield couldn’t find the puck in her skates. The rest of the period was back and forth. The Americans had the better of puck possession, but Canada looked the more dangerous.

In the end, the U.S. persevered and the Canadians made a mistake and later couldn’t convert at the right time. Hats off to the gold medalists!

“It’s definitely part of our legacy,” said Hilary Knight. “The things that we’ve gone though as a team, both on and off the ice, the characters and group of women that we have in the room, it’s really incredible. It’s a little bittersweet right now because we won, but at the same time, this team will never really be together in the same capacity. Hopefully we remain lifelong friends, but this has just been an incredible journey.”