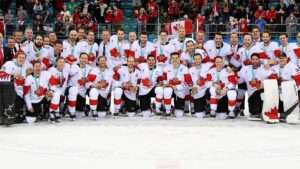 Canada has won their third bronze medal in men’s hockey action in Winter Olympic history, joining the 1956 and 1968 teams with a 6-4 victory over the Czech Republic in PyeongChang, South Korea.

It was a big result for Canada, who lost a shocking 4-3 game to Germany on Friday to eliminate them from contention for the Olympic gold medal for the first time since 2006. For the Czechs, they weren’t able to replicate their success from the round-robin where they defeated Canada in the second game of the tournament for both nations.

For the first time in the Olympics, the Czech Republic found themselves allowing three goals while Pavel Francouz was standing it net. It all began at 8:57 on the power play, Andrew Ebbett scored after missing the past few games with a leg injury when he tipped in Mat Robinson’s shot in front of the net, beating Francouz to make it 1-0.

But 16 seconds later, the Czechs tied it up at one. The record holder for most points in a single Czech league playoff run, Martin Ruzicka tied it up after Kevin Poulin let out a big rebound, tapping in the shot originally taken by Roman Cervenka to make it 1-1.

But only 15 seconds later, Canada took back the lead after some frantic back and forth action. This time, Chris Kelly scored his first goal of the tournament after Cody Goloubef’s shot from the point was tipped at the last second by Canada’s captain, with Kelly putting Canada back out in front to make it 2-1 after some exciting action at both ends of the ice.

The two teams went a few more minutes before Derek Roy made it 3-1. A series of nice passes eventually ended up with Brandon Kozun sending Roy alone in front, with the former Buffalo Sabres forward shooting the puck under the bar to give Canada the two-goal advantage, putting the Czechs down in their worst period of the tournament

Neither team could score again under 45:50 of the contest. Ebbett would grab his second goal of the game after tipping in a feed from Brandon Kozun from near the corner, re-directing the disk over Francouz to make it 4-1.

Just over 30 seconds after that, the Czechs got their second of the night. This time, Jan Kovar scored a controversial goal after launching a wrist shot over Poulin on a delayed penalty call. The Canadians argued that the play should have been waved off after two defenceman touched the puck before the shot was taken, but the goal would stand.

Canada would score one right afterwards to put the game out of reach for the Czechs. Kelly would get his second of the contest after Rob Klinkhammer won a battle in the corner and got the puck out to Kelly, who stepped into the wrist shot from the slot to make it 5-2 for the two-time defending Olympic champions. Roman Cervenka would get two goals late for the Czechs, but Wojtek Wolski would also pot one to help Canada come away with a bronze medal in PyeongChang thanks to a 6-4 victory on Saturday.