Turkmenistan was not expected to have much trouble with Kuwait, but the dominant display the Central Asian team put on surpassed all expectation. Eight goals in the first period, seven in the second and nine in the third made 24 in total for Turkmenistan, with Kuwait scoring twice in the third period after the game was well in hand. Captain Ahmet Gurbanov racked up four goals and four assists in the game, with Aleksandr Vahovskiy, Arslan Geldimyradov, Dovlut Soyunov, Ishan Veleyev and Nikita Avdeyev also recording hat-tricks.

“It was very difficult, but you have to remember that some of our players have only been playing hockey for two years,” Kuwaiti head coach Pavel Arnost shrugged after the game. “We played hard against Bosnia yesterday but Turkmenistan is on another level entirely.”

In the nightcap, Bosnia and Herzegovina needed a win against the UAE to keep pace with Turkmenistan and did so with a 5-1 win, but it wasn’t easy.

Amar Hadzihasanovic opened the scoring at 4:48 but, despite dominating the first period, that was the only goal for the Bosnians. Then, early in the second period, captain Juma Al Dhaheri tied the game with a brilliant individual effort in which he undressed a Bosnian defenceman and the goalie. Less than five minutes later, though, Bosnia’s captain answered when Dino Cordalija intercepted a pass in the UAE zone and fired the eventual game-winning goal on a blistering slapper while shorthanded.

“We were superior physically and superior mentally, but sometimes it takes a catalyst to get the boys going and once they get their confidence, they get on a roll,” said Bosnian coach Brian Jokat.

Less than two minutes after that, Mirza Omer put the hosts up by two with a nice goal of his own, going inside-out and firing top shelf. In the third, Cordalija scored twice more to complete his hat-trick.

“I have to take my hat off to Dino. He was the leader out there today, took the bull by the horns and made the difference,” Jokat continued. “He’s a true leader and he showed out there tonight why he wears the ‘C’.”

On the tournament’s final day on Wednesday, two ties will be broken. First off, either Kuwait or the United Arab Emirates will get their first win. History favours the UAE, who have won all previous meetings against their Middle-Eastern rivals. Then the final game will decide which team advances to Division III of the World Championships.

“It’s the last game and we’ve got a day off to prepare, so we’ll talk a little bit about what happened today and try as best we can to finish on a high note,” said Arnost.
“The stage is set now. We’re three periods away from playing on the world stage again,” said Jokat. “It’s really their choice now how much they want it. We’ll just put this one behind us, look forward to the next one and lay it all out on the line.” 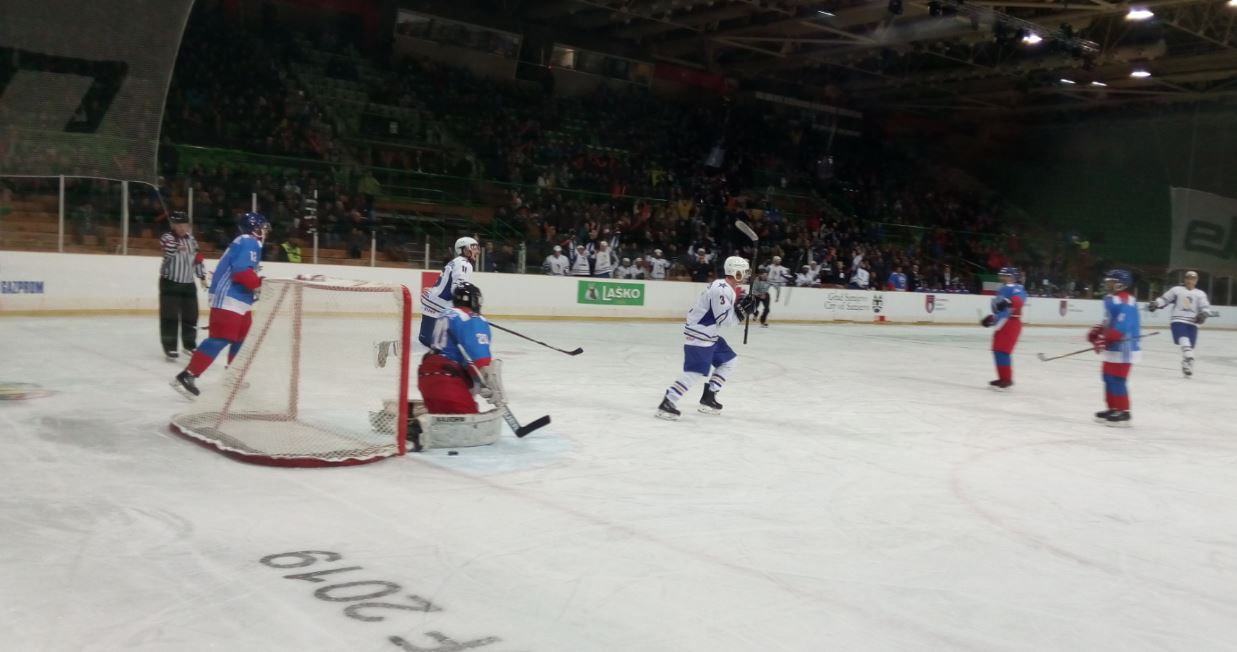 In the win, the Bosnians got two goals from captain Dino Cordalija in the first period, then broke the game open with three power-play goals in the second period – two of which coming on Salem Alajmi’s major penalty for slashing. The Bosnians scored four power-play goals altogether and Mirza Omer led they scoring parade with two goals and two assists.

“That’s the best we’ve played defensively in any game so far and our big guns scored the goals when they needed to, so that made me very happy,” said Bosnian head coach Brian Jokat.

With the score 8-0, Kuwaiti captain Mohammad Alajmi broke Edis Pribisic’s shutout by scoring on a breakaway with 3:23 left to play.

Jokat explained: “We were playing everybody and some guys were cold off the bench. It was a bad giveaway and I’m never happy about that. It would have been nice to get Eddie the zero, but overall I’m happy with the way the guys played.”

An enthusiastic gathering of 1100 cheered the home team to victory. This was the first time an independent Bosnia and Herzegovina has ever hosted an IIHF event and the first time the Juan Antonio Samaranch Olympic Arena had hosted since the 1984 Winter Olympics, when Sarajevo was part of Yugoslavia.

“Hockey’s been away from here for a while so it’s not easy to bring everybody back,” Jokat said of the fans in Sarajevo. “They were loud and I hope to see more of them tomorrow.”

Earlier in the day, Turkmenistan was just as dominant against the United Arab Emirates with a decisive edge in play and a 40-10 shots advantage overall, but it took them until the 35th minute before Ilyas Veliyev finally got them on the board. They added three more goals in the third period for the 4-0 win, with Keremli Charyyev picking up the shutout. Alexander Vahovskiy and Amangeldi Aganiyazov collected two points each.

Bosnia and Turkmenistan will now switch opponents on Monday, with Turkmenistan facing Kuwait in the early game and the UAE facing the hosts later on. If they both win again, they will face each other on Wednesday with advancement to Division III on the line.

“We’ve got stronger competition coming up and we’ve got a couple guys banged up, so we’ve gotta get some rest and we’ll be ready to go tomorrow,” said Jokat, looking ahead.