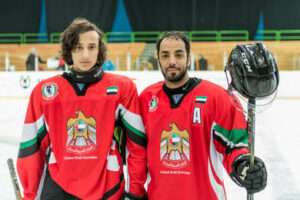 Almost 28 years separate teammates Omar Al Shamsi and Obaid Almehairbi. Together they aim for future prosperity for hockey in the United Arab Emirates.

Blanked in their opener against debutants and eventual runaway winners Turkmenistan 4-0, the Arab nation was tied with Bosnia & Herzegovina halfway through the game before succumbing to a 6-1 loss. They left it late to get back to winning ways to claim third place against Kuwait in a 4-2 win before quickly packing their trunks and heading back home.

While 44-year-old Omar Al Shamsi had a goal and an assist against its Arab rivals Kuwait was a scant consolation, this game also marked a milestone in the ascending career of 16-year-old Obaid Almehairbi, who racked up his first win at World Championship level while being on school holidays.

“I didn’t really get too much playing time, but I am lucky to be here with the team. The game at this level is far more aggressive than what we have back home, so it is a huge difference to play here,” said Almehairbi, who picked up the game at the age of five and made his debut for the Emirates at the 2017 IIHF Ice Hockey World Championship Division III in Sofia, Bulgaria, aged just 15.

During the Division III qualifiers played in Sarajevo between 25-28 February, Almehairbi was the youngest player on the team. Accompanied by fellow millennials, defenceman Abdullah Yahya and backup netminder Abdulrahman Alhosani, they were all ears to learn from their teammates who put United Arab Emirates on the international hockey map.

“The older players tell me about the mistakes I make but also how to learn from them. They are far better than me and I know that I have lots of things to improve in my game such as skating, dribbling and stickhandling,” said Almehairbi, who represents the Abu Dhabi ISC.

Hockey has made fine strides in United Arab Emirates since its trailblazing days in the early 1990s. For Al Shamsi it all started in Al Ain, the second-largest city in the Emirate of Abu Dhabi. Like most other teenagers in the city at that time he was playing football, but soon made an unorthodox switch together with a group of friends in the oasis city 160 kilometres east of the capital Abu Dhabi.

“We used to go to the ice rink for normal public skating. The Canadians and other foreigners soon invited us to play hockey with them and we got addicted to it. I changed from football to ice hockey and I love this game,” he said.

Al Shamsi eventually got rewarded at the international stage for his hard work. Winning gold at the 2009 IIHF Ice Hockey Challenge Cup of Asia on home ice in Abu Dhabi paved the way for him as a 36-year-old to debut at the 2010 IIHF Ice Hockey World Championships Division III in Luxembourg.

“From the old generation, it is now only myself and captain Juma Al Dhaheri left. Then we have the second generation of around two or three players and then the rest of them are the young ones. For five or six of them playing in Sarajevo has been their first international tournament in ice hockey,” said Al Shamsi, who turned 44 at the turn of the year.

With a playing career approaching its twilight years, Al Shamsi is also playing an integral role in nurturing the next generation. Back in Al Ain, home of home of 767,000 people, he is working as both team- and activity manager for his hometown club.

“Most of our domestic players come from Al Ain. In Abu Dhabi there are more foreign players playing hockey, so our focus in Al Ain is to build up the new generation. At the moment we have for instance around 30-35 players in the under-9 and in the next category U12 between 40 and 45 players,” said Al Shamsi, who also acknowledges the challenge to close the gap between certain age groups.

“From the ages 16 to 20 we are suffering. Also, some of our players go studying abroad while others go to the military service. In Sarajevo we missed many players, but I hope they will be with us next year,” he continued.

With the World Championship Division III Qualification being their sole IIHF tournament this season, the United Arab Emirates have of late also been on the lookout for other international competitions to bolster its hockey program. One such example has seen them take part at the President’s Cup Tournament which in early January saw Al Shamsi play in Minsk, Belarus.

“It is the fourth time I took part in it and for us it is a very good tournament. It is a really high level of hockey and a good opportunity for us to learn from them. There are a lot of ex-professional players and it can help us to improve the level of hockey,” said Al Shamsi.

Another addition to that there will also be a regional tournament held in Abu Dhabi next month. With the hosts welcoming club teams from Algeria, Egypt, Kuwait, Oman and possibly Qatar, it is hoped to help develop the game in the region while offering valuable competitive action for up-and-coming players. One of those being 16-year-old Almehairbi, whom Al Shamsi have high hopes for ahead of the future.

“He is good and he has the passion, so he will be one of the best in the team,” said Al Shamsi.