One year ago the New Zealand U18 women’s team joined the IIHF Ice Hockey Women’s Challenge Cup of Asia and won it. This year they had a new competitor with the Chinese Taipei U18 women’s national team that finished the event with gold.

The tournament also included the senior teams from Singapore and Thailand while four more teams played in the Division I competition. Both tournaments were held at the new Malaysia National Ice Skating Stadium in Kuala Lumpur.

The team from Chinese Taipei started with a 5-3 win over last year’s silver medallist Thailand before playing the New Zealanders in a game that eventually determined the gold medallist. A hat trick from Thai captain Nuchanat Ponglerkdee wasn’t enough against the strong Taiwanese offence.

Also against New Zealand the Chinese Taipei U18 team tried to dictate the game from the beginning. Two late goals in the first period paved the win against the junior Kiwis. With a penalty against New Zealand just expired, Yun-Chu Huang gave Chinese Taipei the lead with 92 seconds left and with three seconds left before the first intermission Ting-Yu Hsu made it 2-0. Two third-period goals from Hsuan Wang – the 14-year-old was the youngest player of the tournament her after one month younger linemate Ya-Ching Jan – sealed the 4-1 victory and gold.

On the last day Chinese Taipei beat Singapore 12-1 to finish the tournament with a clean record. The New Zealand U18 women’s team beat Thailand 1-0 with Beth Scott scoring the only goal and Lilly Forbes earning a shutout with 25 saves to earn silver. The Thai had their only win against Singapore, 10-1.

Wang was named Best Forward of the tournament while the other awards went to Thailand. Wasunun Angkulpattanasuk, who had the best save percentage of all starting goalies with 94.12%, was named best goaltender while Sirikarn Jittresin was the best defender. Nuchanat Ponglerkdee, who led the tournament in points (8) and goals (6), was named Most Valuable Player. She scored six of her team’s goals and was on the ice for all 13 goals.

For six of the Chinese Taipei juniors the international season will continue soon as Chinese Taipei is the promoted team in the 2018 IIHF Ice Hockey Women’s World Championship Division II Group B that will be played in Valdemoro close to the Spanish capital of Madrid. 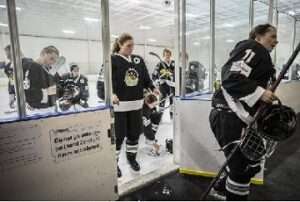 By J.P. Moczulski – The Globe and Mail

New Zealand’s national women’s hockey team wanted an experience that would challenge, prepare and inspire them before they compete in the world championship.

So the team members chose to spend 10 days in Toronto, training in a Canadian university arena, playing in a big Toronto tournament, shopping in Canadian equipment stores and attending every pro hockey game they could get into.

There are only six arenas in all of New Zealand, and 250 registered female hockey players. It’s a country where rugby, cricket and soccer rule, and the word ‘hockey’ more commonly means field hockey. But yes, New Zealand has a national women’s ice-hockey team, better known there as the Ice Fernz.

This team of women, ranging in age from 16 to 27, doesn’t play in the same events as teams such as Canada, the United States and Finland, who just competed in the Pyeongchang Olympics. New Zealand plays a few levels down, and is heading to Valdemoro, Spain, to play in the Division II, Group B International Ice Hockey Federation’s women’s world championships.

Yet the passion these Ice Fernz exhibit for hockey is up there with any Olympic medalist. Every player on this 22-woman team spent 5,000 New Zealand dollars (about $4,700 Canadian) of her own money to get this intensive Canadian hockey experience and then go off to compete in Spain. It’s necessary for a squad that has such limited opportunities to train back home.

During this visit, they’ve held daily training sessions at York University, played exhibition games against local Toronto women’s teams and competed in one of the city’s largest female hockey showcases, the Leaside Wildcats March Break Madness Tournament. They watched the Toronto Maple Leafs and Marlies as well as the Calgary Inferno and Markham Thunder of the Canadian Women’s Hockey League. They visited the CN Tower and the Hockey Hall of Fame, and marvelled at the massive assortment of equipment at Pro Hockey Life.

“It’s like hockey heaven,” said Helen Murray, a 27-year-old neuroscientist who captains the Ice Fernz. “We don’t have enough competition back home.

“Coming over here to play teams who really challenge us is what we need before worlds. These teams are probably better than the ones we will play in Spain.”

The Ice Fernz competed in a women’s Senior A division at the Leaside tournament, but did not pick up a win against teams from Brampton and Durham.

Still, the New Zealand program has seen huge improvement since it formed in 2005.

It has benefited from a relationship forged over the past several years with the Leaside Girls Hockey Association, which has played host to 21 girls from New Zealand on hockey exchanges since 2012.

Those 21 girls have each come to Toronto for between six to eight weeks during a summer break from school (November to February) and are billeted by a Leaside family while they register and play a stint for a Leaside Wildcats team, an association of 1,600 players that touts itself as the world’s largest female hockey association. Nine members of this New Zealand team participated in that Leaside exchange at some point.

The idea to help other countries bolster their female hockey talent came to the Leaside association after the 2010 Vancouver Olympics when Canada and the United States outscored their opponents by a combined 88-4.

Jacques Rogge, the president of the International Olympic Committee, said at the time, “we cannot continue without improvement.”

“We wanted to do our part to help,” said Andrew Smyth, a board member for the Leaside Wildcats, who is himself a New Zealand ex-pat. “It’s a logical way to help other countries, by sharing the kind of hockey experience that our Canadian girls get here. If other Canadian girls hockey associations want to help another country, we’d love to share our playbook with them and show them how we’ve arranged it.”

In the most recent IIHF women’s rankings, New Zealand is No. 31. At the worlds, it will face nations including Spain, Iceland, Turkey, Romania and Taiwan. Yet, the players say like any other women’s hockey team in the world, they, too, were glued to the recent Olympic gold medal final where the United States beat Canada in a heart-stopping shootout.

“The goal some day is Olympic participation,” said the Ice Fernz general manager Jonathan Albright, a Montreal native who moved to New Zealand in 2002. “The skill level of this team has grown immensely.

“It’s hard to gauge our progress because other countries are getting better too. I know there’s not a lot of attention on teams outside of Canada and the U.S., but other nations are putting in a lot of effort and they’re definitely growing a lot.”

Last year, New Zealand earned a bronze medal at its DII, Group B world championships, and this year it is aiming for Gold.

“Every little girl that plays hockey dreams of the Olympics no matter where you live in the world,” Murray said. “If we win gold in our world championships, we would move up one more step. We’d still be a long way from competing in the top division with Canada and the U.S., but it would be a big step for us.”