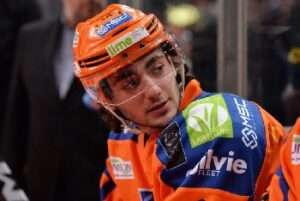 For several months now teenager Liam Kirk has had to deal with being British ice hockey’s great hope.

Since the turn of the year interest in the 18-year-old Sheffield Steelers’ forward has intensified from teams in the National Hockey League, the world’s premier competition.

Scouts from more than 20 NHL teams have taken the time to follow up word-of-mouth recommendations and video of the Rotherham-born forward in action. They made the trip to the UK to see first-hand what all the talk is about to report back to their bosses in North America.

Clearly there is significant interest in his future. On Thursday Kirk was informed that he was being extended an invitation to the NHL’s annual Scouting Combine event in Buffalo, New York, in May.

There Kirk will have the opportunity to talk with all 31 teams as well as go through a series of rigorous skill and physical tests from which the teams will then take the information to inform their decision-making when it comes to the NHL Entry Draft event in Dallas on June 22-23.

Steelers coach Paul Thompson says he will be “flabbergasted” if Kirk – ranked as a ‘C’ Prospect, thereby placing him in the fourth, fifth and sixth round of picks – is not drafted.

Should he find himself as one of the chosen ones and subsequently go on to play in the NHL – or ‘The Show’ as it is often referred to – it will make Kirk the first British-born and British- trained player to do so.

Other British-born players have played in the NHL over the years, but they have largely done so after their training and development took place outside of the UK.

In recent memory, Tony Hand and Colin Shields were two British-born and trained players to be drafted although neither made it through to the top.

Therefore being drafted does not guarantee anything, as a number of Kirk’s current Steelers’ team-mates will testify, but there is a clear determination in the youngster to seize the opportunity he has in front of him, with one aim being a role model for other British youngsters playing what is, for many in the UK, a minority sport.

Every year British youngsters head away from the UK to improve their game, either to Europe or North America. But Kirk, despite opportunities to go abroad, has remained in Britain, his performances for GB junior teams first bringing him to the attention of Thompson at Sheffield.

After a week’s training with the Steelers, Thompson knew he wanted to sign up Kirk, along with fellow teenage prospect Cole Shudra.

Both were given three-year apprenticeships – this season being joined by Bradford-born forward Kieran Brown on a similar deal – and it is Kirk who has emerged the quickest, with the Steelers resigned to seeing the youngster continue his career and hockey education elsewhere, most probably in North America.

For Kirk, the speculation and headlines that have followed him around in recent months are something he has taken in his stride.

“When you’re a kid from Britain playing hockey people laugh at you if you mention the idea of playing in the NHL, or even getting drafted,” said Kirk, who has had conversations in recent weeks with representatives from the Chicago Blackhawks, the San Jose Sharks, the Detroit Red Wings and the Edmonton Oilers, among others.

“So all I’ve done is try to keep improving in the hope of making it a reality. Everybody has dreams and that is one of mine.

“It’s the same for a kid starting out playing football, they want to play in the Premier League – it’s no different for me as a hockey player.

“It is a dream of mine, but I don’t see it as pressure, just an exciting opportunity. I’ve just got to keep playing hockey.

“It’s one thing to be playing in a great league like the EIHL in the UK, but to get the chance to go and play in the best league in the world is what you dream of as a kid, so I’ve just got to keep working hard to try and make it happen.”

Kirk’s progression is something of which Thompson is rightly proud and, although the youngster’s intended three-year apprenticeship will essentially remain incomplete, the former GB head coach insists Kirk is fully deserving of his opportunity.

“Since the turn of the year Liam really has elevated his game to another level,” said Thompson. “He’s been fantastic, every time he’s on the ice there is something happening – he’s using his speed and all his skill – and he is, without doubt, one of our top forwards right now.

This season Kirk has posted 16 points in 59 appearances, nine of them goals. But it is not just the production from one so young in a senior league that has brought him to the attention of team bosses in North America; it is more his mature, skilful performances.

NHL director of central scouting Dan Marr believes that Kirk’s achievement in creating a regular spot on the Steelers’ roster this season, with his ice time increasing as the season has progressed, has made him a player worth investigating further.

Essentially, it is the job of Marr and his staff to compile the Entry Draft List and tell clubs which players they are going to be recommending, leaving it up to the team bosses to decide who they wish to look at in more depth.

“There have been a number of clubs who have gone over to watch him play,” said Marr, “and what he has shown is that he has got some very natural instincts for the game – he’s always able to read the play and be in the right place at the right time. That type of hockey sense is hard to teach.

“He’s also got very good awareness with his vision which, again, is down to his hockey sense.

“But he’s certainly shown that he’s got the playing skills and the finesse skills of passing and being a playmaker and he has good offensive instincts.”

Marr said Kirk would get a further chance to impress NHL teams at the Scouting Combine prior to the draft, but said his performances for the GB national team at next month’s World Championships would also provide him with a chance to shine.

“There will be a lot of scouts attending that event to see him play,” added Marr.

“Any exposure he gets by playing with the GB national team is a feather in the cap for any 18-year-old.

“What makes Liam unique is that he is doing it in a non-traditional hockey market, as far as a market where NHL prospects are scouted.

“Liam seems to really have a passion for the game and is doing what it takes to get to where he’s hopefully going to thrive at it one day.

“I think he’s very excited that he could be somebody who hails from Great Britain and goes on to play in the NHL.

“That ambition in itself will garner respect from the NHL personnel because you certainly want to have those kind of driven and motivated people in your organisation.”