Winning gold is nice. Winning it with three different national teams in a season is great. And doing so three times on home ice, that’s sweet. Malaysia ends its first season with a full-size ice rink with all it could ask for in the three IIHF Ice Hockey Challenge Cup of Asia tournaments the country participated.

The season with the new Malaysia National Ice Skating Stadion at the outskirts of Kuala Lumpur started in August with the arena’s inauguration at the Southeast Asian Games where the home team took bronze.

Since then the Malaysians have seized on their opportunity to practice and play the sport on a regular-size ice sheet for the first time. The juniors beat countries usually stronger than them in senior hockey such as the United Arab Emirates, Kyrgyzstan and the Philippines to win the 2018 IIHF Ice Hockey U20 Challenge Cup of Asia. Earlier this month the women’s team won the Challenge Cup of Asia’s Division I competition on home ice as well and now the men repeated with Division I gold.

Malaysia confirmed its top-seed position and swept through the preliminary round with wins against Indonesia (12-0), Macau (7-1) and India (10-1). It then beat Indonesia 12-4 in the semi-final where it faced Macau.

Macau, a special administrative region of China that was part of Portugal until 1999, had a bad start into the tournaments with losses against India (3-0) and Malaysia (7-1). But the players who normally compete on a small-size rink in an amusement park improved as the tournament went on. They beat Indonesia 5-2 and then avenged the opening-loss by beating India 4-2 in the semi-final game.

Macau opened a 2-0 lead when Chong Man Kong and Kim Hei Mok scored two first-period goals within a span of 43 seconds. India tied the game with third-period goals from forward Rigzin Norboo and Tsewang Dorjay but a five-minute major penalty against Rinchen Tundup with 5:52 left was the beginning of the end for India’s dreams of the final. Chon Kong Leong and Chou Tek Fong scored power-play goals to lead Macau to a 4-2 win.

The final game was a fast-solved affair. Three goals between 3:49 and 4:15 gave Malaysia a three-goal lead and the home team was never in danger of losing it, eventually skating away with a 7-2 gold medal game victory against Macau to win the 2018 IIHF Ice Hockey Challenge Cup of Asia Division I.

Indonesia took the bronze medals after beating India for third place, 4-1. Ronald Wijaya scored two goals including the opening marker in the first period and the fourth with 19 seconds left in the game.

As the tournament, also the scoring stats were dominated by Malaysia with the top-five entries. Ban Kin Loke was the scoring leader with 19 points (10+9) in five games, same as tournament MVP Chee Ming Bryan Lim (8+11). Macau’s Chong Man Kong was the best non-Malaysian scorer, sixth with six points (3+3). Rinchen Tundup, the “Indian Gretzky” wearing number 99, was sixth in goal scoring with four goals.

The season in the series of Asian tournaments will end with the top division of the 2018 IIHF Ice Hockey Challenge Cup of Asia that begins on Tuesday. It will be the first IIHF tournament ever played in the Philippines. Mongolia, Thailand, Singapore, Kuwait and the Philippines will battle it out at the SM Mall of Asia Ice Skating Rink in Manila. 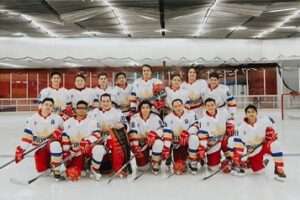 The Philippine ice hockey team hopes to make the country proud when it competes in the 2018 Challenge Cup of Asia next week.

The Philippines will host the Challenge Cup of Asia on April 3-8, with all games to be held at the SM Skating Rink at the Mall of Asia in Pasay City.

This is the first time that the country will sponsor the annual international ice hockey tournament that is sanctioned by the International Ice Hockey Federation (IIHF).

“We are very proud and excited to host, for the first time, the IIHF Challenge Cup of Asia which has been held in different countries since it was founded in 2008,” said Chris Sy, the president of the Federation of Ice Hockey Philippines.

This also marks the first time that the Philippines will compete in the men’s top division of the annual tournament, along with some of the best ice hockey teams in the region.

Riding the momentum of its gold-medal finish in the 2017 Southeast Asian Games, the Philippine ice hockey team is eyeing a podium finish in the five-nation tournament.

They play Thailand on April 3, Kuwait on April 5, Mongolia on April 6, and Singapore on April 8. All of the Philippine team’s games are scheduled at 7 p.m.

During the Challenge Cup, the Olympic-size ice skating rink at the SM Skating Mall of Asia will be the battleground of the competing ice hockey teams. It is equipped with complete facilities such as a digital scoreboard, players’ boxes, scorekeeper and penalty boxes, locker rooms, and a 200-seater stands located around the rink.