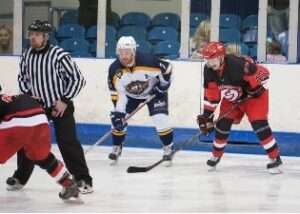 Jacob Ranson, 22, will be part of the Algerian team – Algiers Corsaires – that faces teams from Morocco, Tunisia, Egypt, Lebanon and the UAE at the event, due to be televised on the Abu Dhabi sports channel next month.

And the former Raiders forward, who has spent the last two seasons at Streatham, is excited by the opportunity as he looks to fulfil a dream of playing in multiple countries.

Ranson played in Canada for the Pursuit of Excellence Ice Hockey Academy and also spent a season playing for Mjolby IHC in Sweden.

He said: “I’m over the moon to have been given this opportunity to go play in Abu Dhabi and tick off another country that I’ve played in.

“I honestly can’t wait to get out there and enjoy the whole experience.”

The Corsaires will play four game in round robin tournament format.

And former Albany School pupil Ranson is hoping his side can do well and progress all the way to the final.

“The goal is always to go on the ice to win, so hopefully that’s what we can do, when we take to the ice,” he added.

“It would be an amazing feeling to win the whole thing and come back a champion.”

The fast-skating forward is also extremely excited to see the standard of hockey and see if there is anywhere he can help the Algerian promote the sport in their country.

“Former Lee Valley Lions player Karim Kerbouche, who is head of Algerian ice hockey, gave me the opportunity to come along and I want to not only enjoy the experience but help him promote the sport in his country,” added Ranson.

“He’s been working hard to build the sport up in his native country and it would be an amazing feeling to see it grow in the future.”

Ranson will be writing a blog while in Abu Dhabi and is also planning to take plenty of pictures and videos. 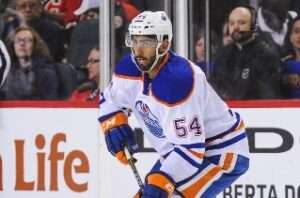 When does the name on the back of a hockey sweater go far beyond simply identifying a player?

Well, in the case of Edmonton Oilers forward Jujhar Khaira, the phenomenon takes place when the letters stitched on his orange and blue Oilers jersey represent billions of people hidden in the game of hockey.

The 23-year-old son of Punjabi immigrants – who were volleyball stars in their own right – has finally found a meaningful role with the Oilers after bouncing between the pro club and its AHL affiliate for the past few years.

Perhaps more importantly, he’s only the third player of Punjabi descent to play in the NHL, joining pioneer Robin Bawa and Manny Malholtra as the only other players from the region to play at hockey’s highest level.

Though Khaira’s story is extraordinary, the family’s immigration story is not. They settled in Surrey, British Columbia along with a number of other Punjabi families.

In fact, Surrey boasts one of the largest South Asian populations in all of Canada with folks from the region making up 30.7% of the city’s demographic.

Sukhjinder and Komal Khaira were hardworking, blue-collar people toiling as a gravel truck driver and speech language pathologist. As they worked hard to provide for the family, Jujhar turned to Canada’s sport for assimilation.

There’s a natural attraction to ice hockey for Indian immigrants for a couple of reasons. The first and least surprising is field hockey.

It’s everywhere in India and the national team is one of the most dominant in the world. Although the game is played on ice in Canada, the speed and specificity of the game entices immigrants looking for a taste of home.

“There is something that attracted recent immigrants to the game and that has to do with the link of field hockey, which is big in India, and ice hockey,” said Hockey Night in Punjabi host Randip Janda.

“Indian people are used to fast-paced, physical games, so hockey was a natural draw.”

The second reason is sociological. Hockey is so ubiquitous in Canadian society that new arrivals gravitate to the sport as a means of creating common ground. And according to Bhupinder Hundal, play-by-play announcer for Hockey Night in Punjabi, hockey passion in the Punjabi community has been growing for a long time.

“It’s [the passion] been there for a long time, a couple decades or more, but now you see it really bubbling up,” he said.

“Within the South Asian community there has been a passionate, loyal hockey fan base across the country and now it’s all coming together.”

Whether he likes it or not, Jujhar Khaira is the face of hockey for more than a billion people.

And if you ask Janda, there isn’t a more perfect idol for the number of young Punjabi’s looking to play hockey.

“He’s not necessarily the most skilled player, he does have some, but he works harder than everyone else,” said Janda.

“That’s a game-changer because it shows all the other kids like him that you can do it through sheer hard work.”

In Surrey, a hockey rink today looks much different than it did even 20 years ago. The youth ranks are filled with players of different backgrounds and the ice is much more reflective of the community.

“Hockey has traditionally been very conservative and lacking diversity,” said Janda. “It’s been hard not to be white and make the NHL.”

But now, in light of Khaira’s success, all of those kids have a tangible idol they can try to emulate.

“For so many of those kids, they’re more than just hockey viewers, now they’re participants.”

Khaira, who has 21 points in 65 games with the Oilers this year, isn’t the only Punjabi succeeding at the higher levels of hockey.

Look no further than his brother, Sahvan, who plays defence for the Swift Current Broncos in the WHL. There’s also Akash Bains of the Everett Silvertips.

“Look around the BCHL and you’ll see five or six Punjab names on each roster,” said Janda.

“The game in the Punjabi community is stronger than ever before.”

Though there’s just one Punjabi player in the NHL, Janda projects it’ll take a five to ten years before we see the true impact of Jujhar Khaira’s fame.

“In a couple years we’ll be seeing Khaira jerseys all over the local rinks,” he said. “All of those kids are saying, if Jujhar can do it, why can’t I?”

In recent years there’s been an interesting addition to the Hockey Night In Canada Broadcast.

Since 2014, Hockey Night in Punjabi has been a staple in thousands of immigrant households cross Canada. Each week they broadcast a hockey double-header in their native Punjabi tongue.

“What we’ve been able to do is tap into the passion that exists,” Hundal said. “But we’ve added an element of flare and excitement to it that really makes it resonate with a cross-section of Punjabi speaking people.”

“We bring something to the table that really connects.”

While that moment might’ve exposed the larger hockey community to HNIP’s existence, it’s the mark they’ve left on the Punjabi community each Saturday night that makes them most proud.

According to Hundal, the cities with the largest South Asian communities across Canada are Edmonton, Vancouver, Toronto and Calgary, so heavy airtime is devoted to those teams. That quintet of cities makes up roughly 90% of the entire Punjabi population in Canada.

They’ve also penetrated into American cities such as Chicago and Pittsburgh and see a ton of web traffic from Punjabi hockey fans living overseas.

Back in Canada, Hundal says the data suggests that the broadcast has reached more than 55% of all Punjabi homes.

“We’ve been able to connect with so many people in the community,” Hundal added.

“People can gather around their TV and watch their favorite team in their language and that creates a special feeling.”

Both Janda and Hundal point to the fact that the broadcast has connected multiple generations of Punjabis to the game of hockey in a way they weren’t before.

The broadcast is also seeing a boost now that Khaira has found a permanent role with the Oilers – giving HNIP a familiar face to feature and one that Indian people everywhere can celebrate.

“He’s representing the hopes and dreams of so many young South Asians,” Hundal said emphatically.

“To see someone that looks like him play in the NHL goes a long way.”

According to the IIHF Survey of Players there are just 1,293 Indians currently registered to play hockey back home in India and roughly one-quarter are women.

The country’s hockey is based in the northern parts of India such as Ladakh where it gets cold enough that hockey can be played on natural ice for a few months during the winter.

So, in light of this data, is India the next frontier for hockey?

Well, Janda says yes, but with a caveat.

“India is definitely the next global destination for hockey, but it’s such a new game there,” he said.

“It’s really starting from square one, even with simple things like geography, weather and infrastructure.”

Infrastructure is a financial thing, but if you’ve read the news lately you know that India is rising in that category. According to an October report from the World Economic Forum, India is the seventh largest economy in the world and is projected to trail only China by the year 2050.

Finding a player base shouldn’t be an issue. The country boasts 1.3 billion people and as stated earlier, hockey is already semi-engrained.

The project is two-pronged. First, Wickenheiser and former NHLer Andrew Ference led an envoy of hockey officials to Ladakh, India, to coach female players and expose more to the game in January.

“It’s just about more than [hockey]. It’s about empowering women and children, and it’s about giving them confidence. It’s about being a part of something bigger than yourself and making a difference in another part of the world,” Wickenheiser told the CBC.

Secondly, Wickenheiser will welcome those same participants to The Canadian Tire Wickenheiser World Female Hockey Festival in November 2018 to further their development and exposure to the game.

“Hockey is just a vehicle we use, but the lessons and the interactions, the emotions, go way past playing a sport. But by playing the sport we all connect.”

Wickenheiser’s initiative is an important one, but it’s still early days. India isn’t an ice hockey country yet, but the opportunity is there.

And given Khaira’s success and the impact of Hockey Night in Punjabi, it seems there is momentum for the game in India.