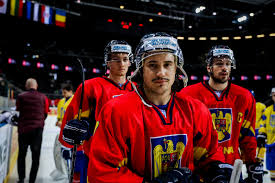 Results at the 2018 IIHF Ice Hockey World Championship Division I Group B in Kaunas has so far not gone Romania’s way. Two straight defeats to Ukraine and Lithuania has stretched their winless streak to thirteen games at this level.

Romania finished rock bottom in their two most recent appearances in Division IB in 2014 and 2016. A far cry from the heady days of 2012 and 2013 when they won four out of ten at this level and enjoyed two straight fourth-place finishes.

A winger with many tricks up his sleeve, Fodor made his debut for Romania at the 2014 World Championship Division I Group B in Vilnius and also featured two years later as Croatia’s Zagreb hosted Division IB. Having endured the dark days at this level, he is now back on Lithuanian ice with the Romanian national team and confident that a change in fortunes is looming around the corner.

“This year I think we have a better team than what we had in both Zagreb and Vilnius. We have lots of good guys coming into the team, many of them still very young so it looks good,” he said.

Selected as the best forward by the Directorate when Romania last year won gold at the Division IIA, Fodor has continued his success at club level with a fruitful 2017/18 season following his return to his native Miercurea Ciuc after building up his reputation elsewhere during the last 12 years.

In what is the coldest town of Romania, Fodor’s form improved as the season rolled on and he was one of the leading domestic players as SC Csikszereda from Miercurea Ciuc once again enjoyed great success. Lifting both the Romanian championship and cup this season, they also reached the semi-finals of the Austro-Hungarian-Romanian Erste Liga with a roster including many illustrious names.

“My centreman this season was Andrei Taratukhin who won the Gagarin Cup and played for Russia, Pyotr Schastlivy, the former captain of Russia was on the team and there was also ex-Spartak Moscow captain Maxim Potapov, all of them good people and great players that we all learned a lot from,” he said.

Fodor who is the same height as New York Rangers’ Mats Zuccarello, picked up the game at the age of four in Transylvania. His dad, Levente, had a car repair shop which the president of the local hockey club frequented and one day brought along a pair of skates for the youngster.

When starting to show promise and looking to push ahead with his development, neighbouring Hungary became the next port of call. Fodor, a native Hungarian speaker uprooted to the Hungarian capital which put him on course towards a professional career.

“I was 14 when I had a chance to move to Budapest, go to school there and play hockey. My family supported me, but I went there alone and it was very hard especially during the first two years. But I had hockey and playing in Hungary helped me a lot,” he said.

Winning the MOL Liga (now Erste Liga) back in 2009/2010 as a 19-year-old is a memory he cherishes to this day as he got his professional career off to a flying start.

“Back then I played on the fourth line where we were hard warriors who had our job to do and it was great,” he said playing on a Budapest Stars team together with many big names who contributed to lifting Hungarian hockey where it is today.

“I’ve played together with Gergely Majoross, who won the Erste Liga this season as coach for MAC Budapest and is also the assistant coach of Hungary. Bence Svasznek was the captain, Balazs Kangyal was great too and all of them played many years for the Hungarian national team. I’ve learnt a lot of from them, how to prepare myself, enjoy my hockey but also how to respect it as a job,” Fodor said.

Despite only being 27, Fodor is currently the third oldest player on the Romanian team skating in Div. IB in Kaunas. Despite having played nearly 100 competitive games this year, crisscrossing by bus through Romania, Hungary and Austria, Fodor is adamant that there is more than enough energy left in the tank to ensure survival at return back to winnings ways in Division IB.

“We are here to stay in this division. I believe if we work together 100% we should be ok,” he said. 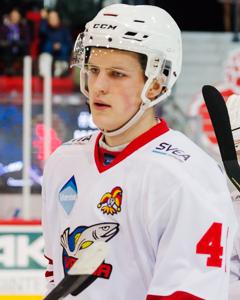 Having turned 19 earlier this month and clearly on an ascent upwards, the Tallinn-born center and winger recently penned a two-year deal with Finnish top division team Vaasan Sport. Despite sealing a move to Finland’s Liiga, his ambitions don’t stop there.

“Now I aim to get playing time with Vaasa, then I will look at my options to try and play in KHL or NHL. The main goal would be NHL,” said Arrak who is on Estonia’s second line at the 2018 IIHF Ice Hockey World Championship Division I Group B in Kaunas. Arrak’s Estonia has enjoyed a flying start to the tournament. They came out of the traps to push Japan to overtime before blanking Ukraine 2-0 in their second game.

Just as the current Champions Hockey League winner Rooba was once spotted when playing against Finnish opposition as a youngster, Arrak got noticed in a similar way as an opportunity arose to continue his development across the Bay of Finland.

“I was around 13-14 and I played in a tournament in Tallinn where Espoo Blues also took part. It went well for me and then came a call to ask me whether I wanted to come over and play junior hockey in Finland,” he said.

From their base in the western metropolitan region of Finland’s capital Helsinki, Blues was by then starting to make a name for themselves as a fine breeding ground for promising Estonian players, Rooba had been among the players who made the jump across to Espoo and was at the club when Arrak arrived in Finland with his father in tow.

“After playing four years for Blues I was then contacted by an agent on how to continue my development. We agreed on the USA where the plan was to play college hockey, but things didn’t go as planned, so I soon decided to return back to Finland instead,” said Arrak.

Leaving the state of Iowa ahead of this season, he returned back to Helsinki and suited up for Jokerit’s U20 team where he quickly got up to speed again. Scoring for fun at the top level in the Finnish junior league, he was called up to Jokerit’s affiliate partner Kiekko-Vantaa to try his luck with the seniors in Finland’s second tier, Mestis.

“Around Christmas time this season I was first offered to practice with Kiekko-Vantaa and it went well so I got playing with the team,” he said of an eventful 2018 so far which seen him suit up for Kiekko-Vantaa in Metsis before his raw talent caught the eye of Liiga’s Vaasan Sport.

“In my opinion, he has really big potential. His development was halted a bit by his decision to go to the USHL. Since coming back ahead of this season he became the top scorer for Jokerit’s U20 and played senior hockey in Mestis and I believe that he will at least be a player in Liiga but could get even higher,” said Estonia head coach Jussi Tupamaki as he lines up Arrak’s attributes that will come to good use in years to come for the Estonian national team.

“He is very versatile, able to play both as center or on the wing. He is tall and skillful but still can play a physical game but needs more kilos and power,” continued Tupamaki.

Behind the emergence of Arrak, more promising signs are coming from Finland which in the near future could be benefiting the Estonian national team.

Joining Arrak to Vaasan Sport for next season is 18-year-old Tallinn-born netminder Conrad Molder. Having moved to Finland in his teens to pursue his future prospects, Molder is eligible for both Estonia and Finland, but yet to feature for either country.

Another player Estonia harbour high hopes for is Kristjan Kombe, a tall center hailing from Estonia’s Saaremaa island who just turned 18 and is showing good promise in HPK Hameenlinna’s U20 set-up.

The lone Estonian national team player selected so far in the NHL Entry Draft was Toivo Suursoo as 283rd overall back in 1994. Narva-born Leo Komarov of the Toronto Maple Leafs was born in what today is Estonia but represents the country he was brought up in, Finland.

For Arrak any talk of whether or not he one day will be mentioned in the same breath as those two appears not to face him as he wants his hockey to do the talking.

“Yes, sometimes I look at my NHL-draft ranking, but my dream is not to be drafted but to actually play there one day,” said Arrak.