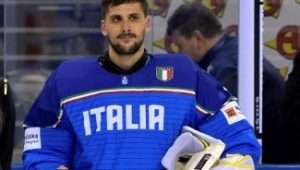 It was a decision that would change his life. Around his 19th birthday and with his first games in the top Italian league, Andreas Bernard decided to move to junior hockey in Finland. To leave his beloved home of South Tyrol (visibly represented as the ad on the Italian jerseys here in Budapest) where he grew up and played in the town the locals call Neumarkt (also known by its Italian name of Egna elsewhere in the country).

He played U20 hockey in Lappenranta close to the Russian border, had his first top-level senior league games in his second season and two years later tried his breakthrough in the second-tier league where he led Jukurit Mikkeli to the championship and was named best goaltender of the league. Two years followed as the backup for SaiPa Lappenranta before he moved to Assat Pori in 2015 where he has been the starting goalie ever since.

Last season he had his statistically best season, fourth in save percentage in the Finnish Liiga. Recently he was sixth in the playoff stats.

Back with the Italian national team he every year goes back to his roots and to his buddies. In the interview zone in Budapest he answers questions to reporters in his native languages of German and Italian, in English and even in Finnish. It’s not the easiest language to learn as it has no relation to his other languages and to most European languages due to its different roots.

“It’s not so easy but I’ve been there for nine years, have my girlfriend and future wife there and she helped me a lot. In the meantime I can speak fluently,” Bernard said.

Bernard has another year with Assat on his contract and doesn’t think about leaving Finland soon.

“I like it very much in Finland. It’s very professional, it’s a bit different than in Italy. The culture is different, it’s less stressful. The mentality is different, we practise more and hard. After the season I have two or three weeks off and then it continues. In Italy you have two or three months off. That’s a big difference,” the 27-year-old said.

“I adjusted to the north but I still have my South Tyrolean mentality,” he said with a smile. That means not just a hard shell but also a hard interior.

Since travelling to the 2012 IIHF Ice Hockey World Championship as emergency goalie he has joined the Italian national team every year and has become the number one in the Azzurri’s net. With a save percentage of 94.12 he’s second in the tournament behind Henrik Karlsson – the Swede-turned-Kazakh even has a 95.70 save percentage.

Italy is in a group of four teams with six points right now that are still in run for promotion and also include Kazakhstan, Great Britain and Hungary. Slovenia has small mathematical chances too while Poland can’t finish in the top-two anymore.

After beating Poland and losing to host Hungary, Italy got a big 3-0 win against Kazakhstan, one of its toughest competitors for promotion, also thanks to Bernard’s shutout.

“It was an important win. If you look at the standings, it’s very tight, one game will make the difference in this tournament and now we’re back with six points and in first place and hope that the other teams will play for us,” Bernard said.

“The win gives a lot of confidence and the three points are very important. I think the tournament is so short that we need every point. The win is important for our moral and we showed that we can also play and win against good teams.”

Italy needs at least five out of six possible points in the games against Great Britain and Slovenia to reach promotion without having to look at other results. But with favourable scores in the other games that dream can also become true with less than two wins.

After a day off Bernard hopes Italy will get back strong for the match-up against Great Britain.

To say which two teams go up is difficult here considering the tight standings and with no team being undefeated nor winless.

“Hungary has always been a difficult opponent for us. But when watching this tournament, you can see that it’s very tight. You can never underestimate Great Britain and I think Slovenia will come out stronger too,” he said.

The fifth round of games will conclude with today’s Kazakhstan vs. Poland and Italy vs. Great Britain games before the final round of games tomorrow. Latest by then we will know which two teams will earn promotion to the 2019 IIHF Ice Hockey World Championship in Bratislava and Kosice, Slovakia. 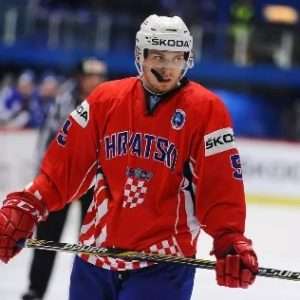 While the poster-boy of Croatian hockey, Borna Rendulic grabs most of the headlines, performances at the 2018 IIHF Ice Hockey World Championship Division I Group B in Kaunas has proved that there is more to their game as a new generation is making its mark.

Seven on the current Croatia roster competing in Division 1B in Kaunas are part of a generation born 1995/96. One of the leading players from that crop now stamping his authority on the team is 22-year-old blueliner Ivan Puzic.

His no-nonsense play with grit and determination are qualities which have stood him in good stead since leaving his native Zagreb eight years ago to fulfil his dream to make a living out of hockey.

“It’s been in my head ever since I was a kid, so I went to Czech Republic on my own when I was 14 to be a professional hockey player,” said Puzic.

Josef Halouzka, a Czech coach then working for KHL Mladost Zagreb utilized his contacts as Vitkovice from the steel city of Ostrava became Puzic’s next port of call.

“We had been travelling from Zagreb to tournaments in Czech Republic in the past. The languages were similar so moving there was not very different compared to let’s say when Borna Rendulic went from Croatia to Finland,” he said.

Instead, a world of difference opened itself up in terms of representing a big club in a hockey country with excellent facilities.

“We were training twice a day and the club had two rinks inside the same arena in Vitkovice. In Croatia we had two indoor rinks in the whole country,” said Puzic.

Soon tasting success and becoming Czech U18-champion with his new club, Puzic had already played for the senior team in the Champions Hockey league when he made a temporary return home to make his debut at the 2016 World Championship Division 1B.

“It was great to play in my home city after being away for six years, my family was there to watch me and it was a proud moment in my career,” he said as Croatia had the chance to win bronze ahead of their final game against Lithuania before, in the end, having to settle for fourth spot.

Upon his return to Czech Republic, Puzic has played a handful of games during each of the last two seasons for Vitkovice. Being an import player does not help his prospects and Puzic has spent time out on loan in the Czech second tier before in January temporarily returning back to Croatia to suit up for Medvescak in EBEL. Currently out of contract he will weigh up his options come close season.

“I have some offers that I will consider after the World Championship, but having been in Czech Republic for eight years I would like to stay there,” said Puzic.

A wish to stay put where they are also applying for Croatia. Enio Sacilotto’s men arrived in Kaunas with the ambition to hang on to their place in Division 1B

A disciplined display in their opening day loss against Lithuania was then followed up by coming close to upset Japan. They then got their reward in game three when toppling Ukraine 4-2.

With three points gained they are up against high-flying Estonia next, before a potential nail-biter against Romania awaits during the final day to stay in the division.

“It will be tough, but we must continue to play with our heart and for Croatia,” said Puzic.