“We are going up! We are going up!” the British fans chanted on the tribune. 15.8 seconds were missing in regulation time that changed everything. For a long time it looked like host Hungary would win the game in regulation time and get promoted together with Kazakhstan in a four-team tie at nine points. But the last-minute bounce made Great Britain tournament winner and Italy will be promoted too as second-placed team.

After the 2-2 tie the rest of the game wouldn’t change anything anymore but Great Britain continued its party on the ice by beating Hungary in shootout with Ben O’Connor scoring the winning goal in the fifth round. Great Britain tried to get into the game for most of the time and outshot Hungary 43-33.

It was the fitting ending of a tournament that was full of drama, surprises and a tight standing from the first to the last day, to the last game and the last minute. Five teams were still in run for promotion before the final day and four teams could still have made it before the last game’s result.

For Great Britain it will be a return to the top division after 24 years. And like in the ‘90s they made it from the third to the top tier with two consecutive promotions.

While Hungary and Italy will be promoted to the 2019 IIHF Ice Hockey World Championship in Slovakia, Kazakhstan had to settle for bronze before Hungary, Slovenia and Poland, which will be relegated.

In front of a loud and passionate sell-out home crowd of 7,870 spectators Hungary had a perfect start also thanks to a tripping call against British goaltender Ben Bowns. At 3:31 the Hungarian players covered him with shots and had several rebounds until Christopher Bodo eventually succeeded and beat Bowns for the 1-0 goal. The British had their chances too but didn’t manage to create enough danger to tie the game.

In a scoreless second period Daniel Koger had the probably best chance for Hungary when Bowns deflected a shot with his hands. A bit later on the other side Adam Vay had to be sharp when Mark Richardson shot after a great pass from Mike Hammond.

A lucky bounce gave Hungary the 2-0 lead at 1:53 of the third period. Janos Hari brought the puck high to the crease where it hit Csanad Erdely’s shoulder and from there went in. The goal was confirmed after a video review.

The British still continued to work hard and when they were looking for a rebound Robert Down eventually broke the spell and beat Adam Vay for the 2-1 goal with nine minutes left for GB to tie.

The British were pushing but the best chance was Hungary’s when Hari missed out on a penalty shot with four minutes left.

The Hungarians seemed to win it and to go up with Kazakhstan. But then, with 15.8 seconds left a nightmare broke out for the hosts. The British occupied their zone, had their time-out and their goalie pulled for a sixth skater. Farmer brought the puck from a sharp angle to the goal and surprised Vay. The puck slid down from his glove and slid across the goal line. It was 2-2. Now suddenly Great Britain would be tournament winner and take Italy as second-place team to the top division.

It was not over yet. Now Hungary took its time-out. With eight seconds left and after a glove block from Bowns the fans started to cheer after a rebound but the puck just came onto the net from outside. Great Britain won and the players and the “Barmy Army”, their loud fans on the ice, celebrated loudly.

It was the start of the British party while the Hungarian fans chanted farewell to their visibly broken players with the traditional singing of the national anthem as they do even in defeat.

Lithuania moving up Next stop: Division 1A 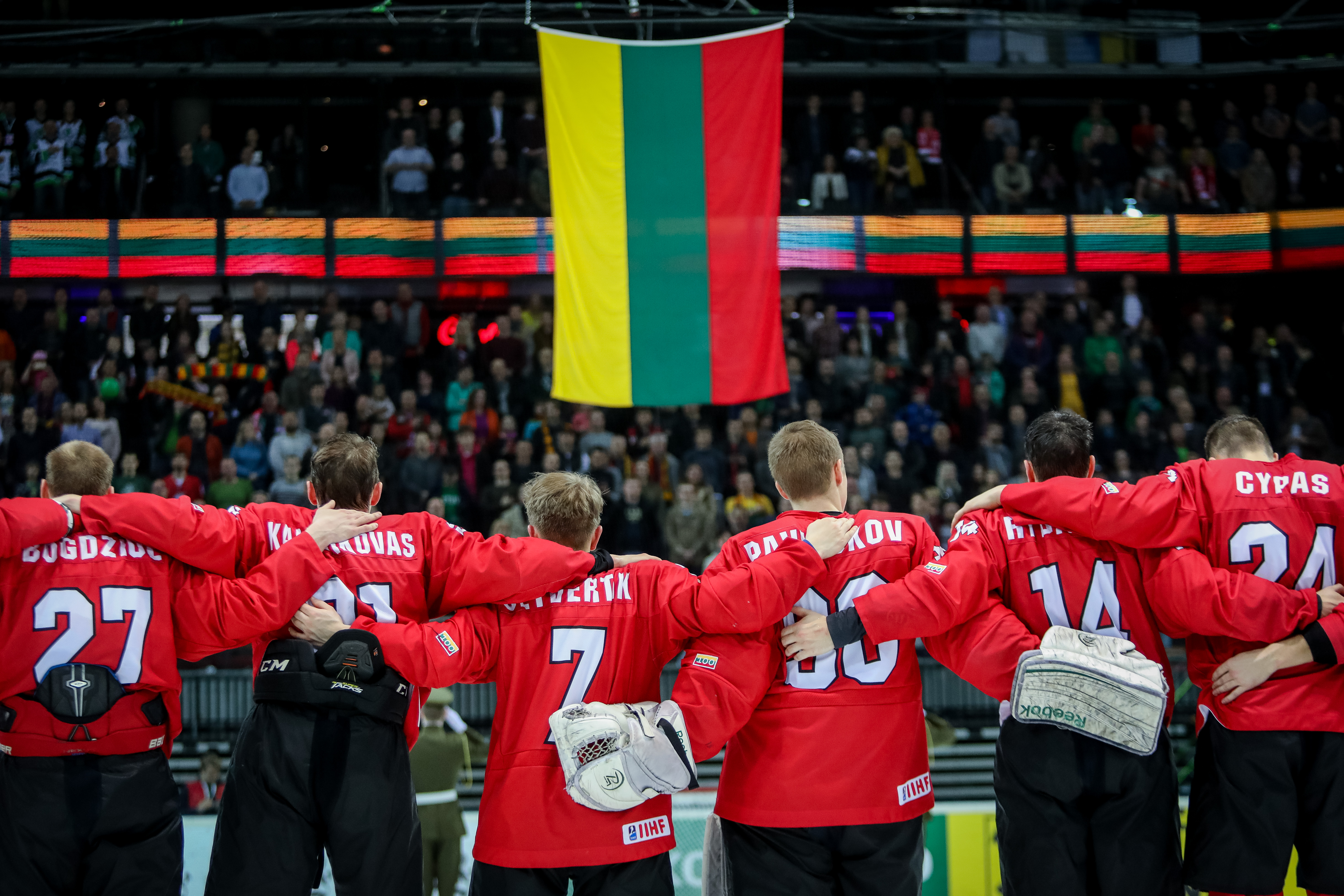 
In the battle of the Baltics, Pavilas Verenis scored a brace while blueliners Nerijus Alisauskas and Jaunius Jasinevicius scored one apiece as Lithuania went undefeated through the 2018 IIHF Ice Hockey World Championship Division I Group B in Kaunas.

Lithuania’s 4-1 final day win sealed their promotion to the 2019 IIHF Ice Hockey World Championship Division I Group A. Japan finished second to win silver while Estonia slipped down to third in Division I Group B.

“I think one of the biggest influence to our success was the arrival of Darius Kasparaitis and Dainius Zubrus to our team. We had read about them, but we never had them together in our locker room. We have a good team, but those two guys made the difference,” said Lithuania’s captain of the evening, Mindaugas Kieras who played his 100th and last game for Lithuania this evening.

Robert Rooba got Estonia’s marker as they went ahead before conceding four straight unanswered goals. Villem-Henrik Koitmaa recorded 39 saves and was voted the best goalkeeper of the tournament by the Directorate.

“They guys gave it all and I am very proud of them. You could see right after the game that the players are disappointed as there was so much at stake. In the third period we still had chances which could have gotten us close, but tonight we lost against worthy winners and the best team of the tournament” said Estonia’s head coach Jussi Tupamaki being gracious in defeat.

The clash got off to an intriguing start as it was the surprise package Estonia that got in front. Lithuania’s netminder Mantas Armalis had lost his stick when Rooba surprised by snapping a trademark wrister from the left boards after 4:20 for a shock lead that helped settle Estonian nerves.

“It was such an important game for gold or bronze, and I’ve never played in front of so many people so it was a bit nervous, but when you got into the game it was ok,” said Estonia’s Artjom Gornostajev.

The lead only lasted for just over three minutes before Zubrus won a draw and Alisauskas hit a bullet from the blueline for this first of the tournament to tie the game at one.

“I was impressed by Estonia, they have a young team now and new guys stepping in and playing really good hockey without trying to make any mistakes. We knew they were a good team, but we felt that they would have to do something extra in order to take the win away from us,” said Kieras.

Winning the shots in the first frame 14-7, Lithuania went in front when Daniel Bogdziul fed Jasinevicius who lofted a shot past Koitmaa for 2-1 after 15:42.

With the game still in the balance, Tadas Kumeliauskas collected the puck from his own defensive zone and charged towards Estonia’s net, got intercepted by Marko Kettunen before the puck went to Verenis who showed no hesitation to hit high past Koitmaa to stretch Lithuania’s lead to 3-1 at 35:58

With Verenis serving a cross-checking minor at the start of the final frame, Estonia piled up the pressure on powerplay with Robert Arrak and Andrei Makrov both denied by Armalis.

As Estonia’s energy level deteriorated, Tupamaki called a timeout with 8:53 for a well-deserved breather. With 3:41 left of the game, Estonia pulled Koitmaa from the net, but it took only 20 seconds before Verenis converted an empty-netter as the crowd got on their feet to celebrate a memorable night for Lithuanian hockey and its