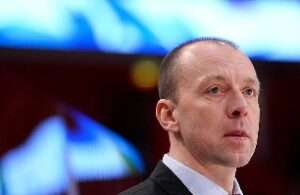 Belarus’ Andrei Skabelka has been appointed as the new coach of Kazakhstan’s ice hockey team, it has been announced.

The 47-year-old will combine his role with being head coach of Kontinental Hockey League (KHL) club Barys Astana.

Skebelka replaces another Belarussian, Eduard Zankovets, and will be expected to lead a successful challenge when Kazakhstan hosts the International Ice Hockey Federation (IIHF) World Championship Division I Group A on home ice in Astana next year.

“Of course the national team of Kazakhstan will have to return to the elite since we will host the World Championship of our division at home,” Askar Mamin, the President of the Kazakhstan Ice Hockey Federation, told Russian news agency RIA Novosti.

“Therefore, Skabelka’s task, of course, will be to win this tournament.”

It will be the first time Kazakhstan has hosted an IIHF World Championship event.

“Holding the World Championship [Division I Group A] in Astana will be a stimulus to increase the popularity of hockey in Kazakhstan,” Mamin said.

As a player, Skabelka represented Belarus in 12 World Championship tournaments and two Winter Olympic Games at Lillehammer 1994 and Turin 2006.

Belarus will be among the teams taking part in next year’s IIHF World Championships, due to take place between April 29 and May, along with Hungary, Lithuania, Slovenia and South Korea.

The top two teams will be promoted to the 2020 IIHF World Championship in Switzerland.

Kazakhstan have not played in the elite division of world ice hockey since being relegated in 2014.

Skabelka has also worked as a coach in the KHL for Torpedo Nizhni Novgorod, Sibir Novosibirsk and Avangard Omsk.

Jett Woo of Moose Jaw in the Western Hockey League could become the second player of Chinese descent to be selected in the first round of the NHL Draft.

Woo, 17, is a right-shot defenseman listed at No. 28 on NHL Central Scouting’s final ranking of North American skaters for the 2018 NHL Draft. He was born and trained in Winnipeg; his father, Larry, is of Chinese descent and his mother, Dolly, is of German ancestry.

Jett has spent a lot of time learning about his Chinese grandparents and said he hopes to have an opportunity someday to play an NHL game in China. The Boston Bruins and Calgary Flames will play in the 2018 O.R.G. NHL China Games Sept. 15-19 in Shenzen and Beijing.

“The way that hockey is shaping up, really anyone, anywhere, can play right now if you stick with it and work hard enough,” said Woo, who said he’s never been to China. “It’s something that’s really cool and I’m really proud to be playing hockey, proud to be of Chinese descent. Having those two things so close to me is something I really cherish and am thankful for.”

Woo would be the second player of Chinese descent selected in the NHL Draft; the New York Islanders picked Lawrenceville School defenseman Andong Song in the sixth round (No. 172) of the 2015 NHL Draft.

Woo said he recalls spending time with his grandparents at their house in Winnipeg, learning about their culture and their cuisine. Woo’s grandparents were born in Canton, China and owned a small restaurant chain in Winnipeg called Marigold. His grandfather has since passed away.

“My dad’s whole side is Chinese so growing up we’d spend days at my grandparents’ house eating Chinese food,” Woo said. “We actually owned a chain of restaurants and were either eating there or getting takeout.”

Even though Woo is looking to break new ground in the NHL, he is considered a throwback-type hockey player.

“If you don’t have your head up, look out,” John Williams of NHL Central Scouting said. “He reminds me of former St. Louis Blues defenseman Barret Jackman. He usually gets one or two big hits every night, but his skill level has improved this season. He has a good shot, makes plays, and his skating has gotten considerably better.”

He’s become a fan favorite in his three seasons with Moose Jaw, and fans at Mosaic Place, Moose Jaw’s arena, serenade him with a loud “Woo,” reminiscent of professional wrestler Ric Flair, after big hits.

“It’s neat to hear those chants,” he said. “I have to give credit to my parents for having the name. It’s cool to have the attention around that and to see different reactions when you go to different places. But to have people chanting your name … it’s a lot of fun.”

Larry Woo played forward for Victoria and Swift Current in the WHL and then for four seasons for the University of Manitoba. Larry and Dolly named Jett, the oldest of their three children, after Chinese film star Jet Li.

“I’m not exactly sure if my dad is a big fan of Jet Li … he might be,” Woo said. “I know that’s where my name came from. I know my grandparents liked the name. With dad having the opportunity to come to Winnipeg and then ending up going to Hollywood, it all ended up working well for him.”

“Dad was probably one of the biggest influences I had in hockey,” Jett said. “He was the one driving me to the rink and was my coach growing up, so he had a lot of say on the bench or on the long rides home. He and my mom were there for me. I’m always looking for them for advice and having that extra person to lean on.”

Woo wears No. 4 to honor Hockey Hall of Famer Bobby Orr, and said he’s also a big fan of Montreal Canadiens defenseman Shea Weber because of his intimidating presence.

“I feel having that extra grit kind of helps me in the game,” he said. “I always bring it back to Shea Weber. One time I watched a game of his and a player was coming down on his side but cut across to the other defenseman and I think it was because he didn’t want to take Shea Weber 1-on-1. That’s something I want to bring to the game; be that guy that opponents are scared to play against.

“I take pride in making defense a priority whether that be competing for every puck or being the first guy at the net boxing out, or making a good first-pass up ice. That, along with playing physical, smart and deciding whether to have stick on puck or to go right at the guy and have body-on-body contact, are the things I feel I do well.”