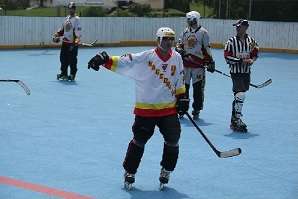 We had the great pleasure to talk to Zoranco Griovski the chief of Macedonia inline hockey, but also helps promoted, sell and grow the game of ice hockey in his native country.

Can you give us a brief history about ice hockey and inline hockey in Macedonia?

Macedonia, especially the capitol Skopje, had a long hockey tradition but was interrupted about three decades after Yugoslavia broke apart. The “new” history starts in fact in 2010 when the Hockey Federation of Macedonia started with activities and sending out a call for players. Just one year later, in 2011, we started with Inline hockey and our national team took part at IIHF Inline hockey qualifications, since then we were a regular member of the Inline hockey family. Hockey is played in Macedonia officially since the 1950s.

Can you tell us bit about yourself and how you became the chief of inline hockey?

I was raised in Germany, near the Alps where hockey is popular, but I came late into hockey and started playing inline hockey just for fun. But after a time we as recreation players made a team and participated in the first Inline hockey season of the DIHL league ever played in Germany (1996). After this adventure I organized a regional league in southern Bavaria and tournaments. In 2004 I decided to move to Macedonia, my parents country of origin, and as I mentioned above, in 2010 I read the announcement of the MHF where they did a call for players.

In 2011 already we took part at the IIHF Inline Hockey Qualifications, since then we played every qualification. But as it looks like now, Inline under the IIHF is gone. No inline qualifications or World Championship this year, that is a disaster for us. The last qualification in 2016 was a historic one for Macedonia with the first wins and best placement so far and we started to dream to make the World Championships some day.


The “chief” is only a title, to make it formal. But I have experience from the past and has long as I can help or a enthusiastic guys like me is needed, I am ready anytime  to go.

With no IIHF inline hockey is Macedonia thinking about joining International Federation of Roller Sports (FIRS)?

In fact we thought about FIRS in earlier times already, we had the idea to play both competitions. But FIRS tournaments are also played outside Europe i.e. Argentina. We also had in mind that competing in IIHF Inline is the better place for us as a country who want’s to push forward in the ice hockey championships. But If the say tomorrow “FIRS Inline will be a Olympic discipline”, as discussed in the past, we will make also the way into the FIRS organizations 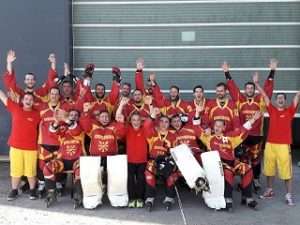 How popular is NHL Hockey and can you watch it on TV In Macedonia?

It is popular, but the media coverage is not good, in fact non existent. NHL,hockey, you can watch only on foreign broadcasters, gladly some sports stations from the Balkan region who are broadcasting hockey (not only NHL, also KHL and Champions League (CHL) are available in Macedonia. Macedonian Radio Television, the state broadcaster, did in earlier times some coverage of the World Championships, but later on they started to broadcast only the semi-finals and final games. This and last year – nothing of it all. But Macedonian media is interested in domestic hockey, they did good job broadcasting when we made our first steps.

How many inline and Ice hockey clubs are there in the country and what league or leagues do they play in?

There are four clubs in total in Macedonia. No leagues are functioning at the moment, sadly the Balkan Ice Hockey League in cooperation with the neighbouring federations did not continued. MHF tried beside the BIHL several times to start a regional league, we also participated in the Balkan Amateur Hockey League two years, and won it one time. The only continuous play in Macedonia so far is the Skopje Ice Festival, a international ice hockey tournament we organize every year with teams from Europe. We had already guests from Russia, Slovenia, Bulgaria, Greece, Bosnia, Romania, Germany, Finland, Serbia and US soldier team located in Germany.

The National Ice Hockey Team has played handful of games, but this November Macedonia will play in it’s first international Tournament at the Development Cup 2018. How will the team prepare?

We are really happy for this opportunity to mesh with other nations on the ice. The preparing of the national team will be outside of Macedonia, I don’t think we will have ice in the arena so early to make preparations in Skopje. The DC2018 will be played near my home town in Germany and maybe I can fix something for us friendly games or some practice with a team from the region to make it a great adventure we can pickup experience for further challenges. 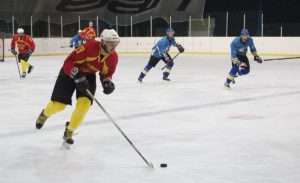 Macedonia vs Bosnia Herzegovina in January 2018

Will the national team seek help from the outside?

The coaching staff will maybe different as in the past years, our coach Jure Vnuk now is occupied with coaching Olimpija Ljubljana. But this should not be the main question, as Jure introduced a system of play we use to play now 4-5 years. We just need to follow this system. For players I can not say nothing at the moment, as the date for the DC2018 is not 100% determined has of yet. We are no pros, and everyone has his life duties.

What are the future goals for hockey in general in Macedonia?

We have to focus a bit more on kids and infrastructure. Macedonia has only one ice rink (now closed, it opens from December to April), and still NO! inline hockey rink so far. Eight years have passed since MHF started and I think we have had good progress if you remember that we had a 30 year gap in Macedonia. But I would like a clear and long term strategy, this is a bit Balkan mentality, things or decisions once made change very quickly.

Has Macedonia Ice Hockey every got any help from Steven Stamkos or Chris Tanev of the NHL?

I think no one requested their help so far, and I personally think it is too early. We have to make the foundation first, when a solid base is established then we should think about options for requesting their help.

Who are your favorite ice hockey or inline players and why?

Jeremy Roenick, Tony Amonte and Joe Murphy with this line i rocked the whole Sega Mega Drive NHL 94 world, and still, if there is a running Mega Drive out there…