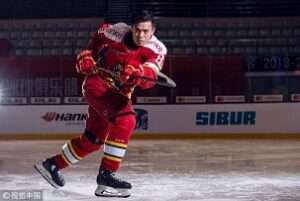 China’s ice hockey team will get a huge boost for Beijing 2022 – the nation’s first-ever Winter Olympics – after Vancouver-born trailblazer Zachary Yuen announced his intentions to vie for a spot.

The 25-year-old defenceman, whose father is from Hong Kong and mother from Guangdong Province, made history seven years ago by becoming the first player of Chinese descent to be drafted into the National Hockey League (NHL).

“To play for Team China at the Winter Olympics is one of my main goals,” said Yuen, who was drafted by the Winnipeg Jets in 2011 before ending up in Russia’s Kontinental Hockey League with Chinese outfit HC Kunlun Red Star.

“It’s still a few years down the road but a lot of people are excited for it – China is a huge market and there has been a lot of interest in the sport and a lot of help from the government to promote it.”

The International Ice Hockey Federation confirmed in May it would allow home nation China to enter a men’s and women’s ice hockey team for 2022 without prior qualification, similar to South Korea’s participation in the 2018 Pyeongchang Winter Olympics.

Yuen and his Kunlun teammates are currently spending pre-season in Czech Republic before they welcome the new season in Russia. Playing in the world’s second best league has its drawbacks, however.

“It’s the biggest league in the world in terms of area that you need to cover – 20-something teams over seven countries and eight time-zones,” said Yuen. “Usually our schedule is we play three or four games at home, then three or four games and back on the road again … it’s like having continuous jetlag.”

But having already made a name for himself in North America, Yuen felt signing with the Red Stars perfectly aligned with his desire to develop the sport in the Far East.

“Having Chinese descent and being the first to get drafted into the NHL, I thought it would be a good opportunity to grow the sport in Asia. Hockey is fairly undeveloped in China,” said Yuen, who also became the first Chinese player to score in the KHL in 2016 and the league Play-offs in 2017.

“After I was drafted there were a lot of fans on the message boards in China congratulating me. At the time I didn’t know there were so many people following hockey over there, but now I’ve come to China to play, the fan base has grown and now they can see me play in person – that’s pretty cool.”

With a population approaching 1.4 billion – and a mainland government hungry to improve their one gold, nine medal tally from Pyeongchang this year – China’s ice hockey potential is endless.

Yet Kunlun Red Star is the only active professional Chinese team and there is just a handful of male talent in Andong Song (the first Chinese-born player to be drafted into the NHL), Rudi Ying (the first Chinese-born KHL player), Joshua Ho-Sang (the highest NHL draft pick of Chinese descent) and highly-touted teen Jett Wu, a fresh 2018 NHL Draft pick by Vancouver Canucks.

Yuen added that there are a two Chinese teams playing in the Russian second-tier, a junior team based out of Harbin, and “tonnes in the recreational leagues”.

“Not looking at the records, it’s just cool to see what’s happening with hockey in China, especially among the kids. Whenever I go back to Vancouver I see a lot of Chinese kids at the rink – when I was growing up I was the only one.

“There were no idols for me growing up because there was no Chinese player at that level. Some of them now look up to me and it’s good to set an example, whether it’s sport, school or personality,” Yuen added.

As NHL chief Steve Mayer said at a Shenzhen press conference ahead of the Boston Bruins v Calgary Flames exhibition game earlier this week: “We understand [hockey in China is] a gradual growth and not something that will happen overnight. The key is the youth … if you start developing a kid now, our scouts will have their eyes open wherever 14 to 17-year-olds are playing.”