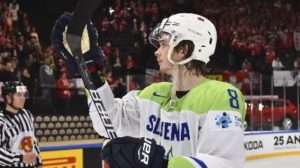 Slovenian national team player Ziga Jeglic receives an eight-month suspension due to his anti-doping violation at the 2018 Olympic Winter Games following the final decision of the Court of Arbitration for Sport Anti-doping Division (CAS ADD).

Jeglic was initially suspended on 20th February 2018 during the 2018 Olympic Winter Games by the CAS ADD. He was tested positive after a game with fenoterol, a beta-2 agonist and specified substance prohibited under section S3 of the 2018 WADA Prohibited List.

The athlete accepted an anti-doping rule violation and left the Olympic Winter Games. At a hearing he stated that he ingested the prohibited substance during the warm-up leading to the game against the Olympic Athletes from Russia on 16 February, after which he was tested positive and that it was an ingredient in an asthma inhaler prescribed to him by the team doctor. However, no Therapeutic Use Exemption had been requested, which would have avoided the doping case, and the use of the inhalator was not indicated on the doping control form.

The athlete voluntarily accepted a provisional suspension as of 20th February 2018 up to the date of the final decision on his sanction and has not played and practiced since.

The IIHF filed its request to the CAS ADD seeking a period of ineligibility of eight months. It cannot be established that the athlete intentionally committed the anti-doping rule violation and the IIHF follows the opinion expressed by the IOC during the procedure that there was no significant fault or negligence. The athlete requested a period of ineligibility of no more than four months.

According to the so-called Cilic guidelines established by the CAS in earlier cases, the degree of fault on the athlete’s part falls into the light degree of fault.

In the final award the Sole Arbitrator of the CAS ADD agrees that it was a case of light degree of fault or negligence but that it is to note that athletes may not “hide” behind mistakes of their doctors or other members of their entourage and that the medical staff must have known that the asthma inhaler contained a prohibited substance and should have sought a Therapeutic Use Exemption.

The Sole Arbitrator accepts that the period of eight month is reasonable and therefore a period ineligibility of eight months is imposed upon the athlete served since 20th February 2018.