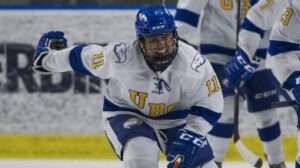 The hockey craze in China is growing ahead of the Beijing 2022 Winter Olympics and recruiters are not just scouting talent at home — North American players of Chinese descent are in high demand.

And one of those recruitment camps is being held in Vancouver this week.

“With [China] hosting the Olympics in 2022 in Beijing, they’ve realized that there is a bit of a talent gap,” said Coach Rob Morgan, who manages the Kunlun Red Star women’s team in Shenzhen, China.

Morgan, who used to coach the Yale women’s ice hockey team before moving to China, is hoping to scout female players and entice B.C. talent.

“One of the initiatives now is to identify North Americans with Chinese descent who can help China medal and that’s truly the goal of the government, the Chinese Ice Hockey Association and Kunlun Red Star,” Morgan said.

Team China has performed well in women’s hockey in previous decades — coming fourth in the 1998 Olympics — but Morgan says as other countries have continued to develop their teams, women’s hockey in China fell behind.

“In southern China, where our professional team is hosted … they’d never seen hockey before we arrived last year,” he told Stephen Quinn, the host of CBC’s The Early Edition.

Emily Costales, a student at the University of British Columbia who plays hockey for the UBC Thunderbirds, is keen to join Team China’s Olympic team for both professional and personal reasons.

She says she’s not concerned about divided loyalties if she makes the team.