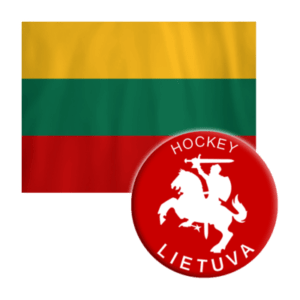 “Everything is possible. Just look at what Great Britain did this year winning a place at the top level of the World Championships. Every player in our national team will come back stronger in the new season and you never know what can happen. Hockey is a magical sport,” said Lithuania’s Bosas as a big season looms around the corner.

Having penned a deal with the Bayreuth Tigers of Germany’s DEL2, Bosas hopes to keep up his flying form and scoring touch in a season culminating with Lithuania competing at the 2019 IIHF Ice Hockey World Championship Division I Group A played in Astana, Kazakhstan, starting at the end of April next year.

With his trademark beard and an uncanny eye for a goal, Bosas played an integral role in Lithuania’s recent rise-up in the hockey world. The tall and powerful forward returned to his native Kaunas in April and netted half-a-dozen goals in five matches as Lithuania in emphatic fashion rolled on to win the 2018 IIHF Ice Hockey World Championship Division I Group B.

While the big attention was on the former NHL stars Dainius Zubrus and Darius Kasparaitis, who gave a short comeback for the country’s biggest-ever ice hockey tournament, Bosas had six goals in five games, more than anyone else, and was named Best Forward of the tournament.

Thriving to play in front of boisterous home fans inside the Zalgiris Arena, he formed a prolific first line together with veteran Zubrus and 19-year-old prospect Mark Kaleinikovas as Lithuania thundered upwards to go undefeated and lived up to lofty set expectations.

“Yes, it was a historical win for Lithuania and also for me. We were all very excited but also worried not to win. Everybody called us ‘dream team’ and only expected us to win gold. It was really hard but we did it in the end and I hope it can make our sport more popular,” he said of a tournament where their final-day win against Baltic rival Estonia was played in front of a vociferous crowd of 10,170 carrying their home favourites to a comfortable 4-1 win.

Following the euphoria in Kaunas, the current crop of national team players now hopes competing at a higher level might generate more exposure to foreign suitors. Having played a meandering career which has so far taken him to Czech Republic, Kazakhstan, Poland, Great Britain and Germany, Bosas has become well accustomed to being the odd one out thanks to his nationality.

“Most of the time people don’t know anything about Lithuanian hockey and sometimes don’t even know where Lithuania is on the map. So every year it is the same story because of my passport and nationality,” said Bosas, who last season proved his worth in Germany’s third tier at Regensburg. An initial short-term deal was soon extended with the Bavarian team as he finished as top scorer to get his reward and a move to Germany’s second-highest level, DEL2.

Born and brought up in the basketball town of Kaunas, Bosas got hooked on hockey as a first grader after a coach introduced the sport at school. While in his teens, a player agent got him a move to Sparta Prague’s junior set-up, which offered him invaluable years of progress within Czech hockey.

“It is big hockey country and I got a lot of good experience first from junior hockey, but later also from playing for my first men’s team. I remember this being the first step in starting a career abroad and leaving my parents home. It was not a bad start,” he said.

But if a stint in Central Europe helped him bridge the gap from junior to senior level, his most lasting memory from his ongoing hockey odyssey comes from Central Asia. Four seasons in Kazakhstan at the start of his decade playing for Arystan Temirtau, Gornyak Rudny and HK Almaty toughened him up considerably.

“There is a quote I’ve learnt from Kazakhstan, that if you’ve been there you have seen everything in hockey, and I think that is true. For me Kazakhstan was the biggest development for me, but also the hardest hockey life so far,” he recalled.

Bosas will be able to reacquaint himself with his former stomping ground as Lithuania will travel east to face a string of stern challenges at the World Championship Division I Group A. Contested inside the magnificent 12,000-seater Astana Arena in Kazakhstan’s capital between 29 April to 5 May 2019, they will take on Belarus, Korea, Hungary, Slovenia and hosts Kazakhstan.

Seemingly a gargantuan task, Lithuania can be greatly inspired by the recent upward ascent of Great Britain. While the Brits enjoyed two consecutive promotions, they were beaten twice at the tail end of last season by Lithuania during exhibition matches on British soil. One player able to share his experiences of taking Lithuania to the brink of top division is Mindaugas Kieras, who played 20 senior World Championships for his country between 1999 to 2018.

At the end of April 2006 and with Kieras on the blueline for his country, Lithuania narrowly lost out a chance to compete against the top nations courtesy of a 5-3 reversal against Austria at the 2006 IIHF Ice Hockey World Championship Division I event in Tallinn, Estonia. Despite having been in front three times against the Austrians, Lithuania succumbed to three straight power-play goals and in the end finished second of the group, which meant missing out a place at the 2007 IIHF Ice Hockey World Championship played in Moscow and St. Petersburg.

“It would be very hard to reach that level again and it would also depend on what kind of players we would have. But if we would have played in Division IA this year, we would have been close, very close to stepping up the top,” said Kieras, who announced his retirement from the national team duty in the direct aftermath of winning gold in Kaunas.

With Kieras having hung up his skates, Lithuania lost not only one of its natural leaders out on the ice but gone is now also one of the best moustaches in the hockey world. Thankfully Bosas is well-suited to step in and continue the legacy, both in terms of leading the way out on the ice, but also by holding on to his trademark facial hair despite disapproval from close quarters.

“My mum hates it and my wife-to-be loves it, so I will keep it,” said Bosas.