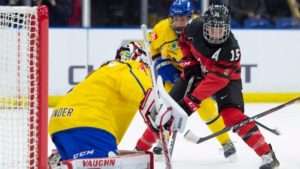 Sarah Fillier scored in her national-team debut and Laura Stacey scored short-handed for the host country at the SaskTel Centre.

Emma Nordin scored a power-play goal for Sweden in the third period. Goaltender Lovisa Selander, 22, stopped 46 of 52 shots in her first start for her country.

It will be their first meeting since the Americans edged the Canadians 3-2 in a shootout for Olympic gold in February.

The two countries with the best records at the conclusion of the round robin meet in Saturday’s final. The third and fourth seeds will play for bronze.

Former national-team defender Ylva Martinsen has taken over as coach of a young Swedish side that has five teenagers on its Four Nations roster.

The Swedes struggled to generate sustained pressure in the offensive zone against Canada. Erika Grahm put a shot off Canada’s post in the first period.

Earlier Tuesday, the U.S. scored five unanswered goals in the second period to down Finland 5-1.

Brianna Decker, Hilary Knight, Sarah Brodt and Dani Cameranesi each had a goal and an assist for the U.S. Cayla Barnes also scored for the Americans.

Maddie Rooney, who backstopped the U.S. to gold in Pyeongchang, South Korea, turned away nine of 10 shots for the win over the Finns.

Veteran netminder Noora Raty was the busier of the two goalies, repelling 44 of 49 shots in the loss. Emma Nuutinen scored Finland’s lone goal.