Spain’s junior hockey program had a year that most would expect from Canada. Or Sweden. Maybe even the U.S. In 2018, two of Spain’s national junior teams won gold. The U18 boys took first in Group B of Division II in the International Ice Hockey Federation’s World Junior Championships in Croatia, while a few months earlier the U20 squad won WJC gold in Group B of Division II in Serbia. Both earned promotions to Group A for the 2019 WJCs.

“For us, this feels like a miracle,” Frank Gonzalez, president of the Spanish Ice Sports Federation, told Inside the Games last spring. “We’re here in the southernmost point of Europe, and we’re showing that we can compete against countries with a real tradition and culture in ice hockey.

“We’re still a long way from competing at the elite level,” he added, “but the work of all our teams deserves a lot of credit.”

Two Spaniards were among the top four scorers in the U20 tournament, Joan Cerda and Dorian Donath Sanchez. Cerda finished with five goals and five assists in five games, good for third overall and two points off the lead. Donath also had five goals and assisted on three, tying him for fourth among all scorers, and was a +6 in five games.

Cerda is a 2000 forward who has been playing in France, never in North America. He had a big year in 2017-18, scoring 15 goals and 10 assists in only 20 games for Angers in France’s U20 league, earning him second in the points race. He is currently on loan to a pro team in France’s Division 2.

Sanchez is a 1999 forward born in Sweden. He has played both youth and junior hockey in Sweden, never in North America. He’s been strong in the J20 Elit League this year with eight goals and five assists in a dozen games.

Defenseman Alexander Torres-Gil (three goals, one assist in the 2018 U20 WJC) is one of the few Spanish players who has migrated to North America for hockey. The 1999 has played midget and junior hockey in Canada, including two years in the Central Canada Hockey League 2, where he’s totaled eight goals and 14 assists over 51 games.

The best goalie in the 2018 U20 WJC was Spain’s Raul Barbo, who posted a 1.57 goals-against average with a .901 save percentage and a shutout. Those were actually better numbers than those he generated in the U18 tournament. The 2000 also appeared in the men’s 2018 Division II Group B World Championship April. Barbo got into two games and posted a 1.000 save percentage for the gold-medal winning home-team Spaniards. After winning three world golds, he is now playing the 2018-19 season at the Ontario Hockey Academy where he has a 2.62 GAA in three games.

The U20 Division IIA will be held in Estonia in January. It will be Spain’s first tournament in Group A since 2012. 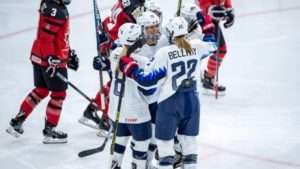 The U.S. women’s hockey team took advantage of Canada’s sluggish start and a fortuitous goal by Sydney Brodt for a 2-1 win Wednesday at the Four Nations Cup tournament.

Brodt scored the winner when the puck deflected off her midsection and past Canadian goaltender Shannon Szabados at 18:32 of the third period.

The U.S. women’s hockey team took advantage of Canada’s sluggish start and a fortuitous goal by Sydney Brodt for a 2-1 win Wednesday at the Four Nations Cup tournament.

Brodt scored the winner when the puck deflected off her midsection and past Canadian goaltender Shannon Szabados at 18:32 of the third period.

Hannah Brandt also scored for the defending champions in the first meeting between Canada and the U.S. since the Americans prevailed 3-2 in a shootout in February’s Olympic final.

Loren Gabel’s first career goal for Canada was bittersweet as it accompanied a loss.

The 20-year-old from Kitchener, Ont., evened the score at 3:30 of the third period in front of approximately 3,500 at the SaskTel Centre.

“Scoring that goal, we got a lot of energy from it,” Gabel said. “We definitely brought it to them in the third, but just couldn’t come out with the win.”

Szabados started her second game in as many days and made 31 saves in the loss.

Alex Rigsby got the nod for the U.S. after Maddie Rooney played the tournament-opener. Rigsby repelled 23 shots for the win.

Canada (1-1) and the U.S. (2-0) cap the preliminary round Friday against Finland and Sweden, respectively.

The two countries with the best records after the preliminary round play for gold and the third and fourth seeds for bronze Saturday.

“I’ve seen enough U.S.-Canada games,” Pearn said. “You know every time you play them, it’s going to be a fine, fine line between winning and losing.

“We talked about having a good first five minutes and we didn’t. Our best period was the third period. We did enough that if we got a break, we might have been able to win the game.”

“At the end, you still have to be a little bit better than we were on the last goal.”

The U.S. started fast outshooting Canada 16-4 in the opening period. Brandt struck at 1:18 scoring on a rebound during a goal-mouth scramble.

“Our philosophy is to have a shooter’s mentality and get many shots on net, and get to the net,” Corkum said. “That seems to be the way goals go in these days at any level. The goalies are just so good.”