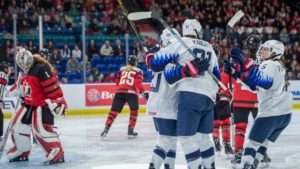 Holders of the world and Olympic titles, the American women reinforced their status as the No. 1 country in the world in women’s hockey by beating their archrivals on home ice at the SaskTel Centre.

“It’s great to be recognized as that,” U.S. forward Hilary Knight said. “We definitely put in the work.

“When you’re in Canada, there’s a lot more pressure.”

The last time Canada beat the U.S. in a tournament final was the 2014 Four Nations in Kamloops, B.C.

“We’re going to have a hard look in the mirror and really look at what we have to do to move forward and take more pride when we wear that jersey.”

Canada won the majority of women’s hockey finals between the two countries in the first decade of this century, but the pendulum has swung to the U.S. in the second.

The Americans edged Canada 3-2 in a shootout to win Olympic gold in February.

“Definitely we want to be able to beat them in those big games,” Canadian forward Natalie Spooner said.

“As athletes, that’s what we train for is those big moments and those are the ones we want to shine the brightest. It sucks, but I think we’ve got to learn from this.”

Leading 2-1 after the first period, Knight and Brianna Decker scored in a 24-second span midway through the second.

Dani Cameranesi had a pair of assists.

U.S. coach Bob Corkum gave Alex Rigsby the nod in goal Saturday over Maddie Rooney, who backstopped the Americans in the Olympic final. Rigsby repelled 23-of-25 shots for the win.

Starting goaltender Shannon Szabados was replaced by Emerance Maschmeyer early in the third period after giving up five goals on 23 shots. Maschmeyer had two saves in relief.

Canadians fail to finish on chances

The Canadians produced a better start Saturday than in a 2-1 loss to the U.S. in the preliminary round, but couldn’t finish the few quality scoring chances they generated.

The quickness and creativity of the U.S. attack was a handful for Canada’s defence in the second and third periods.

“We have to win a little bit differently than they do. Goals don’t come as easy for us as they do for them,” said Perry Pearn, who is coaching the Canadian women for the first time.

“Once you get behind 4-1 and you’ve been struggling to score goals, it’s a big mountain to climb.

“I didn’t think we gave up, but what happens is now you think you’ve got to make the perfect shot and you pass up the things you have to do to beat the U.S.

“You’ve got to take shots, create rebounds, beat them to loose pucks, create second and third chances and we didn’t do enough of that.”

Finland scored a trio of third-period goals to defeat Sweden 4-2 for the bronze medal earlier Saturday.

The 2019 women’s world hockey championships April 4-14 will be held in Espoo, Finland.

The U.S. women have won four straight world titles and seven of the last eight.