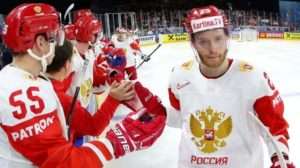 Mikhail Grigorenko was among the best scorers at the Karjala Tournament

The Euro Hockey Tour got underway in Finland with Russia winning the Karjala Tournament ahead of the host nation in Helsinki.

The decisive game came first: Russia played Finland on Thursday night and finished with a 3-0 victory. By the end of Sunday’s games, both teams were tied on six points, but the Russians took top spot thanks to that head-to-head triumph.

It was a success for an experimental Russian roster as head coach Ilya Vorobyov took the chance to explore the depth of talent pushing for a role with the national team as a new Olympic cycle gets underway. The team had an average age of just 24 and seven players got their first senior international call-ups.

“Overall, there were more positives than negatives,” reflected Vorobyov. “We won the cup and we took a look a several new players. But I don’t want to pick out individuals. We played a team game and I want to focus on the team.”

Among the new faces to make an impact, Andrei Kuzmenko scored twice in Russia’s 4-1 victory over Sweden on Saturday, while defenseman Alexei Vasilievski crowned his first call-up with a goal in Sunday’s 2-5 loss against the Czech Republic. “I could hardly believe it when I scored,” he told the Russian Hockey Federation website. “It was all down to my team-mates, who got us into a great position and I just needed to put my stick down and deflect the puck into the net. We had other chances but couldn’t take them [against the Czechs]. Overall, though, we won the tournament so the guys did well.”

Finland took second place thanks to a victory over neighbouring Sweden in Sunday’s concluding game. The goals came from new faces: Ville Leskinen marked a successful first call-up to the “Lions” before Teemu Eronen and Jani Hakapaa got their first senior international goals to leave head coach Jukka Jalonen happy with his week’s work.

“Everyone who came to the national team for the first time did really well,” Jalonen said. “Leskinen was effective and Arttu Ruotsalainen was good in every game. Juhani Tyrvainen fulfilled his role well.

“It’s a very good start for us and the players will only gain motivation when they see what they can achieve at this level,” the coach told Leijonat.fi.

Sweden took third place thanks to its 3-2 victory over the Czechs on Thursday night.

Russia ‘B’ wins the Deutschland Cup

For the second year running, Russia’s so-called ‘Olimpiskaya Sbornaya’ won the Deutschland Cup. Under the guidance of head coach Oleg Bratash, Russia won the decisive match-up against Switzerland in Krefeld on Sunday.

The two youngest rosters at the event went into that showdown tied on five points after regulation-time victories over Slovakia and overtime successes against Germany. The Swiss looked strong in the early stages and led 2-1 at the first intermission. Christoph Bertschy’s goal made him the tournament’s leading scorer. However, his team was limited to three lines and finished with just five defenceman after a major penalty saw Fabian Heldner ejected from the game.

With four lines to draw on, Russia outlasted Switzerland. Artyom Zemchyonok tied it up in the middle frame before third-period goals from Roman Abrosimov and Dmitri Yudin sealed a 4-2 victory.

Bratash echoed Vorobyov’s views about the importance of teamwork. “We looked at the qualities of each player and assessed our work as a team,” he told the Russian Hockey Federation website. “We’ll pass all our conclusions to the coaching staff of the national team. I don’t want to single out individuals; we played as a team.”

Upcoming World Championship host Slovakia finished the tournament in third place after beating host Germany 2-0 in the last game, which was scoreless for 54 minutes. Andrej Kosaristan had a 34-save shutout in his international debut while Marcel Hascak and Radovan Pulis scored Slovakia’s late goals.

But for most German fans the result was secondary on a day when head coach Marco Sturm received an emotional send-off. During his three seasons he led Germany to Olympic silver and to two World Championship quarter-final appearances. Under his guidance the team peaked at seventh place in the IIHF World Ranking and currently stands eighth. On Monday the long-serving former NHLer will leave the country to become an assistant coach for the Los Angeles Kings. His successor will be found during the upcoming weeks.

Poland hosted a four-team contest as part of the Euro Ice Hockey Challenge – and it proved to be a challenging weekend in Gdansk. For Austria, the eventual winner, the problems started when the team’s luggage went missing and did not arrive until Friday afternoon. By that time, Poland had already started its game against Denmark, only for a problem with the ice to halt the action after one period.

Equipped at last, Austria took to the ice against Norway in a game that was moved to Friday night but once again had to stop due to technical problems. On Saturday, at last, the teams could play their full games. The Austrians defeated Denmark in overtime and followed that up with a 2-0 success against Poland on Sunday to secure top spot. Goals in the second period from Kevin Macierzynski and Daniel Oberkofler – the latter marking his 100th game for the national team – won it for the Austrians, goalie David Madlener got the shutout.

There were two other Euro Challenge events played over the weekend. In Minsk, Belarus looked to bounce back after relegation from the World Championship top division and showed some promise as it took second place in its tournament. Latvia got the win thanks to a shootout success in Sunday’s decisive game, but the host enjoyed victories over France (5-2) and Slovenia (4-1).

Latvia clinched the title thanks to Egils Kalns’ winner in the shootout. Earlier, the Baltic nation had taken a first-minute lead thanks to Edgars Kulda, but Vladimir Denisov got Belarus level late in the second period. The tournament was also the first for France following the retirement of long-serving head coach Dave Henderson. Under the guidance of Renaud Jacquin, Les Bleus took third place thanks to a shoot-out win over Slovenia.

In Hungary, meanwhile, Kazakhstan won all three of its games in a four-nation tournament. Victories over the host (3-1), Korea (5-3) and Italy (3-2) gave the Kazakhs top spot. Hungary and Italy finished with one win apiece. Hungary got second place thanks to the head-to-head win against Italy but was unable to play against Korea, which went home without a point, due to ice issues.

Vilnius hosted the six-team Baltic Challenge Cup, with host nation Lithuania welcoming teams from Estonia, Latvia, Belarus, Romania and Japan. The group phase saw Latvia’s B-team, a selection of players from the domestic league, defeat Estonia and Romania to progress to a gold-medal game against Japan. The Japanese edged through their group despite a shootout loss to Lithuania; a 5-1 win over Belarus B secured top spot.

The final saw Latvia win 3-0 thanks to a pair of second-period goals from Sandis Grinbergs and a shutout by Reinis Petkus.

During the event a Baltic Championship for clubs for the 2019/2020 season was announced. Beside the domestic leagues, top clubs from Latvia, Lithuania and Estonia will play during autumn and until December for the title.