When the Division I Group B International Ice Hockey Federation World Junior Championships begin later this week, no team is likely hungrier to win than the Hungarian squad, which was relegated from Group A after going winless in five games last year, scoring only 11 goals and allowing a group-high 25.

The teams of Group B in Division I begin play Saturday in Tychy, Poland. Hungary will open against Japan, which was promoted from Division II Group A after ripping through Group B with four regulation wins and one overtime victory.

This year’s team would probably like to lean on 1999 forward Zsolt Szalma, who scored three of the team’s 11 goals in 2018, and finished with four goals and two assists combined in nine international junior games last year. But he’s been less effective in international play this year, with only a pair of assists in seven games.

Hungary’s top offensive threat in international junior play leading up the WJC has been right wing Natan Vertes, a 2000 who has eight points (four goals, four assists) in seven games. Forward Akos Mihaly, a 1999, has three goals and two assists in seven international games while 1999 forward Hunor Csaszar has recorded five points, all of them assists.

Four players have totaled four points in international junior play. 1999 center Balint Horvath was able to reach four points (three goals, one assist) in just three games. 1999 forward Bruno Kreisz needed five games to reach four points, scoring a pair and helping on two more. Marcell Revesz, a tall (6’4”) forward, has three goals and an assist in eight games. Nandor Fejes, a 1999, leads all Hungarian defenseman with a goal and three assists in six games. Mate Seregely has only two points, both assists, but the 2000 blueliner recorded those points in just three games.

Hungary should probably be expected to play well in the WJC, if its performance in the Friendly International tournament is any gauge. The U20 team beat France, a Division I Group A squad, 4-3 on Nov. 10. Horvath had a pair of goals in that game, including the game winner in overtime. Three days earlier, the Hungarians beat Italy, which will be in Group B, 6-2, with two goals from Revesz and one from Horvath. The team’s only loss was a one-goal defeat to Slovenia, also in Group B. Vertes netted a pair in that one.

Q & A With Sam Uisprapassorn 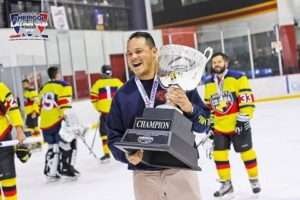 We caught up with Sam Uisprapassorn coach of Colombia national ice hockey team and Chapman University hockey. Sam has guided Colombia to Pan American gold and most recently the Latam cup Championship

Can you tell our audience little bit about yourself and your hockey background?

I grew up in Southern California, the son of a Thai father and Colombian mother. I was 8 years old when Wayne Gretzky became an LA King and once I saw the games on TV I knew I wanted to give the sport a shot. I started playing at Paramount Iceland which is actually down the street from where Zamboni is headquartered (fun fact). It seems as I lived on the ice from there on out playing pee wee through my College years.

How does the Coach of Chapman University hockey team end up coaching the Colombia national ice hockey team?

I believe I have the best coaching jobs in all of hockey. I get to coach my alma mater and the national team that is culturally so close to me.

I saw that there was a Colombian national team that had participated in the first Pan-American hockey tournament in Mexico City in 2014. I sent the team an email offering to help in any way possible. A few months back went by without a response and then one day I got a call that the Head Coach position was open and it all goes from there.

You have had success with Colombia winning the Pan American tournament twice and now the Latam Cup. What do you tribute your success to?

I give our players all the credit for the success I have had with this team. I have been fortunate to work with a group of players who have won as a group playing roller hockey or individually at the College or Junior level on the ice. When I took on the role of Head Coach I came in with a clear direction and systems that I wanted to implement offensively, defensively and the player bought in and executed shift in, shift out. I’m proud of our players for taking this approach and it’s the main reason for our success. 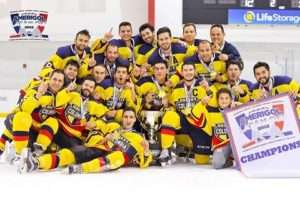 Colombia is a very new to the game of ice hockey how would you judge the talent on the team?

Our group is made up of Colombian players based in the US, Sweden and Colombia. Our players from Colombia have to be some of the most talented I have seen throughout my coaching career. This is a big statement since there is no regulation size hockey rinks in the entire country. The skill development through roller hockey is very evident.

About a third of our team is based in the US and this has really helped bring our team along. It’s an advantage to have players out of the ACHA and ECHL.

What are the challenges for the advancement of ice hockey in Colombia?

I would say the biggest challenge is developing the ice hockey infrastructure. As I mentioned before, there are no ice rinks in the country. The same could be said for the other countries we compete against.

Chapman University Hockey team is not having a great season, do you think you can turn the season around?

The Chapman program is currently in a rebuilding phase. I would expect better results by the end of the season and beyond. 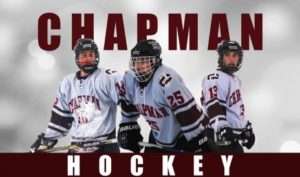 You are also a Golf nut and the founder and CEO of Cut Golf can you tell us little bit about this adventure?

I love golf as much as I love hockey. About two years ago decided that having to pay $35-50 for a tour quality golf ball was insane. Started doing some research and was able to find a way to launch Cut Golf where we offer a tour quality golf ball for under $20 ($19.95 to be exact). It’s absolute blast and I lead our organization more like the captain of a hockey team versus your typical CEO.

who are some of your favorite Ice hockey or inline players?

I’m very old school. I grew up idolizing Wayne Gretzky. Brendan Shanahan, Luc Robitaille, Eric Lindros and Steve Yzerman were some of my favorite players growing up. They just don’t make them like that anymore.