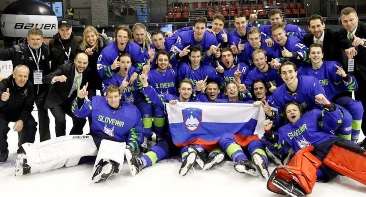 The Slovenian players celebrate after getting their fifth win in the fifth game at the 2019 IIHF Ice Hockey U20 World Championship Division I Group B against Ukraine to earn promotion.

Slovenia’s juniors are celebrating gold in 2019 IIHF Ice Hockey U20 World Championship Division I Group B, two years after the same group of players won the U18 Division IB.

A 4-1 victory over Ukraine on Friday afternoon secured top spot for Ales Burnik’s team. Despite going behind midway through the second period, Slovenia rallied to claim a comfortable win thanks to goals from Aljaz Predan, Jaka Sturm, captain Jaka Sodja and Martin Bohinc. Defenceman Nejc Stojan collected three assists to finish with 2+5 for the tournament; Jan Drozg’s helper on Predan’s marker took him to 12 (4+8) points, finishing as the competition’s top scorer, five points clear of a clutch of players.

Slovenia wrapped up top spot after the first game of the final day in Tychy, Poland, but the tournament was far from one-sided. Going into Friday’s play, there was a three-way battle for top spot and five of the six nations were in with at least a theoretical chance of a medal. In the event, the host’s 4-2 win over Hungary secured silver for Poland and left Hungary with bronze. Italy defeated winless Japan in overtime to take fourth place ahead of Ukraine. The Japanese drop to Division IIA for next season.

Slovenian head coach Burnik said: “It was a very interesting tournament. The competition was high quality because all the teams were fairly evenly-matched. Even going into the last day we had three teams going for promotion and five hoping for a medal.

“In the end we proved to be the best team but we faced tough games against good opponents. We managed to reach our goal thanks to our preparations, our excellent staff and some great energy among the players.”

The toughest battle for Slovenia came against Hungary. Down 1-4 after 40 minutes, a big fightback in the third period set up a shootout win that gave the Slovenes a crucial advantage going into the final day’s play. Captain Sodja had an assist as Rok Kapel made it 2-3 then scored the tying goal himself. Slovenia won all five games at the tournament but only three of them came in regulation time.

“Every game was tough but I think Hungary was the hardest,” Sodja said. “We came from a 1-4 deficit, got through overtime and won in a shoot-out. I think we deserved our first place here.

“We’re especially happy because we’ve repeated our success at the U18s in Bled two seasons ago.”

Promotion brings new challenges, not least because many key players will be unavailable to tackle Division IA next year. Absentees will include Sodja and the two North American-based forwards, Drozg (Shawinigan Cataractes) and Mark Strazisar (Hampton Roads Whalers).

“It will be difficult since about half the current team was born in 1999 and won’t be able to play next year,” Sodja admitted. “That won’t be easy, especially against even stronger teams at that level. But the team spirit we showed here means we can stay in a higher group even after next year’s tournament.”

Slovenia’s success has a strong Jesenice accent, reflecting the status of Anze Kopitar’s hometown as the hockey hot spot of the country. Ten of the roster play their hockey there, including Stojan, Sodja and goalie Ziga Kogovsek, and many of them have been getting extensive experience of the adult game in the cross-border Alps Hockey League. Head coach Burnik is also part of the staff at Jesenice and recently had a spell as interim head coach following the departure of Gaber Glavic last month.

Burnik is hopeful that this season’s international success can serve as an inspiration for the next generation. “Next year will see even better hockey played in Division IA. The 1999 year group is an above average group of players for us, but some key players will stay with the team. We cannot aim for the top spots but we will put in the maximum preparation. And let’s hope that this can motivate our younger players to starting practising hard tomorrow.”

While most of the plaudits went to Slovenia, there were honorable mentions for two Hungarian forwards. Kristoff Papp’s six goals made him the leading goalscorer of the tournament, one ahead of Hunor Csaszar. Slovenia’s Drozg earned the prize for top forward, Poland’s Olaf Bizacki was named top D-man and Italy’s Davide Fadani was the leading goalie.